What do you pick up from my homemade traingle of manifestation?

Yes this already posted in my journal but I’d like to cast out a fish net just to see what you guys pick up, here’s what the triangle looks like. 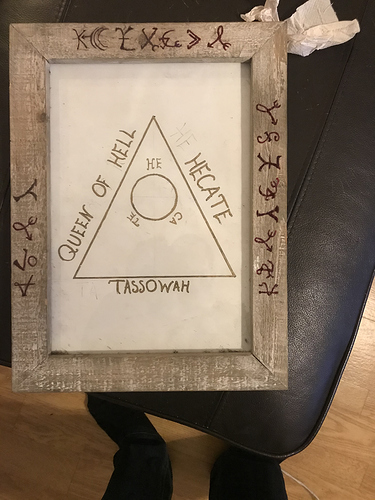 On the top it says: Hecate, to the right it reads Lucifer, on the left it says Belial. The alphabeth being used is from Enoch B. Petrucelly’s book: The Black Witch - A Grimoire of the Demonic Tounge. The alphabet works both as letters and words at the same time that channel a specifric intention it’s really cool and has much potential, once the mirror properly cinsecrated I’ll uppdate the thread in it’s ready state. As how I decided on how create it and what’s is for, it can be found in my journal:

2019-11-11T23:00:00Z A NEW WAY OF OLD - consecrating a triangle for a specific current or entities I recently completed a Gamaliel working but I have a unpdate to make first in this journal first in regards to a related topic. You see we all learn at some point that the use of a traingle of manifestation is important you are supposed to draw it, it’s an equailteral traingle, some people like to add a few things like a circle in ther triangle. This is instead of drawing it in the dirt or maki…

This untested as of yet, but I am of the idea that if you draw something by hand with the intention of making contact with something that will show one way or another in it’s energetic signtaure.

I should also let you know I had a hard time finishing up drawing the lines themselves, due to my eyes constantly being interrupted by flashes of blue coming from the lines as I filled them in. It’s not perfect however I don’t feel any need to mess with it any further. When gazing at it in its unfinished format I feel: an intense electric energy coming from it, just gazing at it a few seconds put me into I guess I would call a light hypnotic trance, that quickly migrates into the TGS. It also has a very fiery feel it, I know that the a golden color represents solar energies, I descided to fill in the triangle with a golden colot to represents trhe solar energies and also to help with manifestation, this was mostly an intuitive process adding colors and such, the fiery feeling described earlier is not overwhelmingly hot but it’s more dense and and pleasantly warm I’d say, but overall it has a very radiant quaility to its energy field. This is what i were able to pick up without looking at it’s aura. Let me know what you pick up both in this state as well when it’s done for comparison.

Thanks for your time if you did this