What did I do that was wrong?

This morning between 7 - 7:30 AM. My spouse and I tried to contact King Belial but it was unsuccessful. I was wondering what might we have done wrong that cause him not to manifest.

Around 7 am this morning my husband and I entered one of the bedrooms upstairs. We pulled the curtains and closed the bedroom door to reduce light and sound disturbances. We set up a black scented candle and three incense sticks on a dresser which we stood behind facing north as we chanted:

During this time I held the sigil of King Belial that was printed. We went on for about 30 minutes chanting and focusing on the sigils but nothing happened.

Although nothing manifested we did verbally state out loud that we wish that no spirit follow us and for them to go back from where they came.

In truth none of that ritual matters one bit. You could have faced south with underpants on your head screaming I’m a Yankee doodle dandy and if your head was in the right place you could have had the best results anyone has ever seen. It’s not that you did something wrong it’s that you didn’t do what is right.

^ That.
Magick is at it’s heart all about manipulating energy, not about the theatrics though they can help, and you use your own energy to to affect external energy. You control your energy with your emotions and our mind.

You learn how to do that by first finding out how to feel your own energy, so you can get feedback on what you’re doing with it, and you do that usually through meditation.

It’s also a good idea to build up those skill before trying to contact entities, unless you already have a relationship with a guide you evidently can trust.

The reason for this is that very often, just the act of performing thing kind of magick attracts a lot of attention from the unseen, and you become vulnerable to parasites and imposters looking for a free ride on your yummy energy if you don’t know how to tell the energy flow isn’t what you wanted.

i find drawing a sigil out my hand helps, it allows you to focus your intent (which it all comes down to) charging your sigil step by step as you create. and you draw it out…
think - verbalize what you want , incorporate all senses in your visualizations too.

this is how you create / manifest - your subconscious opens that pathway to your consciousness - so going into your ritual in this way sort of, unlocks the gateway.

Thanks Shah. Next time I will draw it and focus all my energy/ intention into the sigil. Thanks again.

Thanks for the advice.

On the point about energy, (and keeping out bogeys/impostors, etc)

I’d recommend casting a circle before the “rite proper”.

This is a good one:

I start in the east with Amaymon.
Its an inverse of the LBRP I trace an INVERTED pentagram which invokes instead of banishing and vibrate the name Amaymon 3 times.
I then recite “Amaymon,teacher of the dark secrets and keeper of the lost knowledge,come now and fortify the East quadrant of my temple!”
I then recite "Alash Tad Alash Tal Ashtu (The Grand Conjuration). 3 times then recite “Amaymon come” until I feel a presence in front of me.
Amaymon has come.

I then trace a line going counterclockwise to the North while giving the sign of silence like in the LBRB.

I trace the inverse pentagram again and vibrate Azazel 3 times.I then recite.
“Azazel,He who has given us metal to forge our swords! He who has given us the Weapons of the Gods,come now and fortify the North quadrant of my temple with power!”
Again The Grand Conjyration is recited 3 times then I say “Azazel come” until his presence is felt.

Note by this time I’m usually starting to lose control of my arms as they float through the air.
I’ve stopped using a.circle.foe.this so there is no boundary.

I then do the same as before tracing an astral line to the West.Again the inverse pentagram and recite “Abbaddon,keeper of the keys to the bottomless pit! Dragon of the Void! Come now and fortify the West quadrant of my temple with power!” Again,Grand Conjuration 3 times and the call “Abbadon come” until his presence is felt.

By this time I’m waning with the rapture and am struggling to keep control of my body.

I soldier on and trace an astral line connecting the pentagrams to the South. Where my go to Demon awaits his call.Belial.
I form the pentagram and recite "Belial! He who bows to no man nor any god!The lawless one! He who has dominion over ALL planes of existence! I call you to walk upon the Earth and fortify the South quadrant of my temple with power!“
Again,grand conjuration followed by Belial come!” until his presence is felt.

I should note I try to the best of my ability to visualize the Gatekeepers.
Sometimes I get a quick mental flash of how I perceive them.

Next I trace a line back to the East connecting the pentagrams and the energy of the Gatekeepers.

I then spread my arms (if I’m able) into a crucifix position and say.
“The Gatekeepers stand around me.The flames of the empire fill my temple and my being! Gatekeepers of the Infernal Empire,open the pit below me and cleanse me with Hellfire!”

I would set up Belial’s sigil in the south beforehand as that’s where you’ve invoked him.

This calls in entities to raise energy, and to keep out anything unwanted.

Further, you may make a declaration such as “By our holy wills we declare and command that no spirit or force that is not in alignment with this work stay or tarry in this space, begone!” (Something to that effect).

At that point you would proceed with your request, etc.

As a couple, I’d say sex magic would possibly be a good medium for raising energy (and getting into trance) for your ritual.

While a lot of implements are not truly necessary, if it gets you in the zone then whatever psychodrama and pomp you want to incorporate is good (it’s for YOU).

You may also wish to play some videos in the background during: 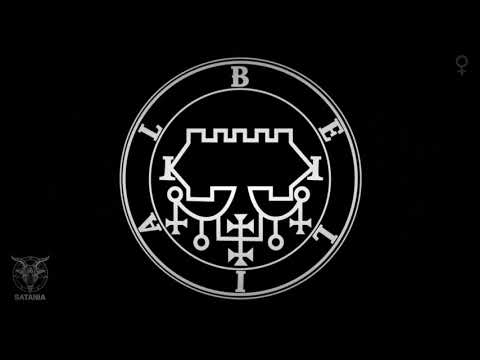 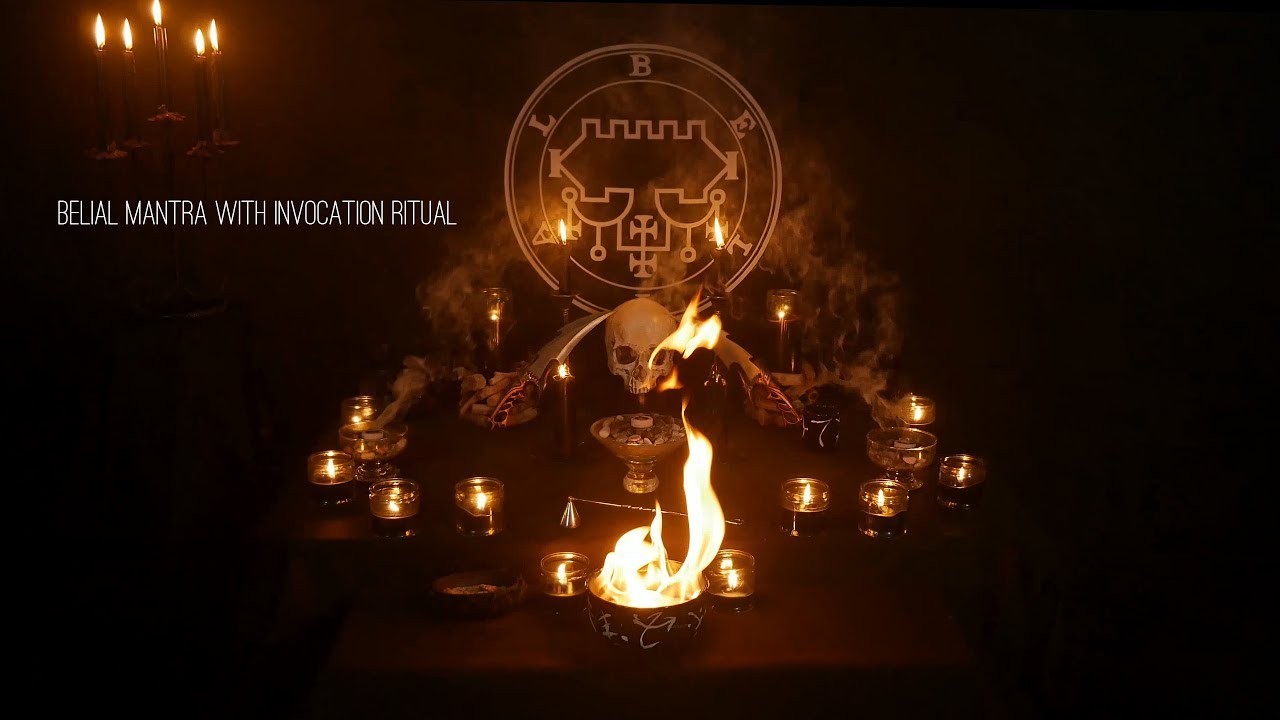 My spouse and I tried to contact King Belial but it was unsuccessful. I was wondering what might we have done wrong that cause him not to manifest.

Belial is one of the most known spirits to manifest when he wants and normally he ignores a lot the persons at the beginning. With some people doesn’t especially like to work people with a military career or police what law and order might be. He is lawless.

Yes, I had read that King Belial is lawless and that he doesn’t like authority.

Did you structure a form for him? Ref this:

No, we did not structure a form for him.

Consecrate the printed Seal of King Belial with appropriate bodily juices.
Chant His enn whilst gazing at His Seal. Don’t stare or look - gaze.
If you keep at these things it does alter the Morphic field over time.

Yeah! There’s a range of these: Spit, Tears, Blood, Semen, Menses, Urine, Faeces, Pus.
I tend to use spit, followed by spit and blood. Chew the end of a match and dip in a drop of finger blood from a cheap lancet device.

how many times have you tried full evocation before? and have you ever been successful?

did you try getting into an altered state beforehand?

it might be worth picking a system, like the one Eva linked above, or something like Demons of Magick, or even the Lemegeton/Lesser Key of Solomon.

Unless you’re quite advanced and have done it multiple times before, I don’t think simply chanting an enn is going to be enough for full physical evocation.

If you’re looking for connective evocation even, you might be better meditating or getting into a trance state first.

I have tried full evocation now three time. At first I thought they weren’t successful but now I am starting to think otherwise.

In first evocation that I did I did not see nor hear anything. However, I had an images of a dragon face, a wolf’s face, a fox, a sunfish that transformed into a salmon, the letter “V” that was white, the letter “S” that had three burnt mark towards the top and the letters “W” and “X” that looked black and as if they were carved in wood.

At first I thought these were just my imagination but after looking into the meaning of these things days after I found that they had a strong connection to my current state. I also read afterwards that these spirits do communicate through imagery sometimes so I have taken this as a message from King Belial.

I did not try to get into an altered state of consciousness beforehand. I will absolutely however try this next time.

The Lesser Key of Solomon is the first grimoire I sought out an I am still reading and learning from it.

I would recommend Demons of Magick for an easier system of full evocation.

Alright, I will look it up. Thanks