Weird experience when I was a kid: (input?)

okay just a heads up, this happened many years ago… probably when I was like between 5 to 7 years old so I’m remembering the events the best I can

I hadn’t thought about this particular “event” for a long time. Kinda forgotten but it somehow just randomly came up in my mind just now. I’m going to try to describe it the best I can. This isn’t really spirit related or Magick related but it is weird and maybe has some sort of explanation. Basically want input on what it might be – especially with my knowledge given now that I didn’t have before I started working in occult related stuff (spirit work, lucid dreaming, etc).

So basically… When I was a kid this happened around night time. I was awake (which made me question that it was a sleep paralysis experience, but maybe/possibly, since I couldn’t move during part of it) at this point in my bedroom. My bedroom was on the third floor for reference and my window was at the head of my bed. Both important details. I don’t know what time of night it was, it was dark out and I was supposed to be falling asleep so probably between 10-11:30pm if I had to guess.

Basically I saw “lights” and many of them in weird arrangements outside my window. This doesn’t make sense for one big reason, because my house is right next to another building – close enough (there was some space but not sure the measurements between the two) so there shouldn’t have been room for anything. I remember staring at the “lights” and I don’t know for how long, but I remember then suddenly becoming scared and hiding under my covers (typical of me -_- back then).

From them my memory blacks out, I don’t know if I fell asleep at this point or what happened. But I " woke up" (don’t know if this was a sleep paralysis or even astral projection) in a “room” that was dome shaped and everything was SUPER BRIGHT. Like enough to blind you. Everything was white too. I will also mention that I do remember feeling very groggy and physically weak – and I wasn’t able to move. I didn’t see anything with me but felt like there was something with me (same type of presence feeling you get when an entity is with you). Before I chose to black out again (again felt very groggy and weak) because I had a gut feeling that I didn’t want to be aware because I was scared or something. Like wanted to “check out” of the situation.

So before I blacked out I did take note…that there was a sorta “banner” of “writing” (I didn’t regonize it and again I was in a weird state) around the “ceiling” (approximate location) of the “room” (I just assumed that’s where I was, honestly couldn’t see much. Kinda like there was nothing there). That is one thing that sticks in my mind. Then I did black out (fell asleep?) and woke up. Nothing remarkable happened, and I’ve never experienced anything like that again.

Also from the moment I blacked out in my bedroom to when I woke up the next morning, felt like minutes but it still stands out very much. So it’s not like I was aware for like an hour taking note of every little detail, I was very groggy and felt like passing out and after a moment of being weirded out (and scared) I did “pass out”. Another note, I could move when I was in my bedroom looking at the lights, because I sat up to look at them. It was after that I couldn’t move.

Here is a poorly drawn sketch of what the “area” looked like. Also there were no lines, I was just trying to draw the dimensions and shape of the “room” to better help you understand what it looked like: 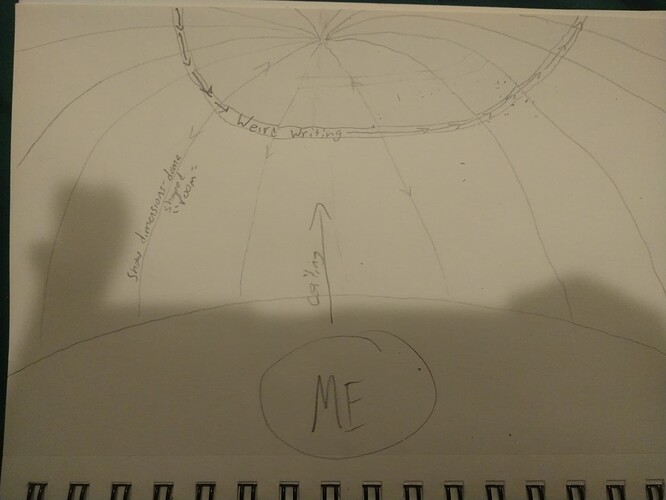 So basically looking for any input whatsoever. @Mulberry

I remember staring at the “lights” and I don’t know for how long, but I remember then suddenly becoming scared and hiding under my covers …
From them my memory blacks out, … I " woke up" (don’t know if this was a sleep paralysis or even astral projection) in a “room” that was dome shaped and everything was SUPER BRIGHT. Like enough to blind you. Everything was white too. I will also mention that I do remember feeling very groggy and physically weak

Woah, this sounds like a classic alien contact/abduction memory that has a lot of hallmarks similar to other people who have has the same. So: It’s night and you’re a child in bed, you see lights, sleep paralysis and the sense of having your mind influenced. being transported somewhere, and that somewhere is round and bright, not natural. The language part is unusual but not unheard of it’s been reported by engineers taken to se ether living ships that they have language written on them. Not seeing any beings isn’t unusual eiher, it varies a lot but most people only get lights and lost time so it’s cool you remember more. I guess the emf had less effect on you than some.

I would not recommend reporting it officially to MUFON or anything, you don’t want a visit from the mib (no jk, those are real and suck a bag of donkey dicks… maybe do a working and bind them away from you for good measure).

It would be really cool if you can remember the writing. In a coupe of weeks I’m remotely attending a webinar by Dr Stephen Greer who’s working to get proper, non fear mongering disclosure on the presence of ETs on Earth, and he leads guided meditations to talk to these entities that’s very workable when you’re already an occultist and quite used to the idea of telepathically talking to beings that aren’t physically in the room with you.

This is called CE5 (close encounter of the 5th kind, i.e., human initiated) but you can also use western occult and shamanic methods to summon these beings for a conversation, maybe you could find who was involved here and get more info on their motives?

I would not recommend reporting it officially to MUFON or anything, you don’t want a visit from the mib (no jk, those are real and suck a bag of donkey dicks… maybe do a working and bind them away from you for good measure).

What’s MUFON? I didn’t really intend to report it to anyone, it happened a long time ago and I was just more so curious about input on what it could have been. Nothing like it has happened again so for me it’s more like a distant memory that I can’t make sense of.

I don’t remember if I added, but I do remember having a slightly (?) sore abdomen when I awoke the next morning and the next night I did have weird dreams (not another experience but just like weird vivid dreams). However besides all that nothing else happened.

What’s the mib? Why do they suck?

It would be really cool if you can remember the writing.

I honestly wouldn’t be able to. Sorry.

I guess the emf had less effect on you than some.

There are a few organisations that are supposed to collect encounters and help coordinate research, and the Mutual UFO Network aka MUFON is one of them. They have conferences and such. But they’re infiltrated and of limited usefulness. There are other grassroots organisations trying to do things like, provide a database of contact reports the public can search.

Sorry about the confusion, but how would EMF cause that effect on me? I work with energy on a daily basis with my spiritual practices so I’m confused…

You’re entire body is made of nothing but energy. Change your energy you change your whole body. Input here a little bit and you go to sleep, change another and you feel no pain, input another way and you hear voices, get clair sense phenomena, remember things, forget things, activate or deactivate dna expression, become foggy or clear headed etc.