Ushering in the Aeonic Feast! 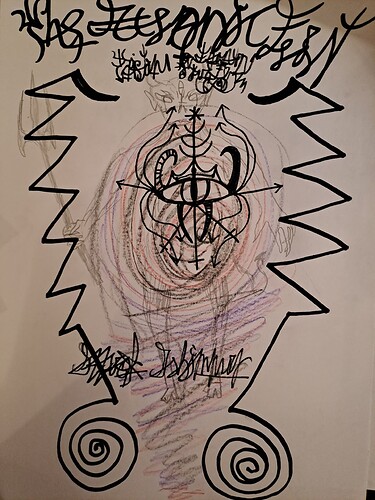 This i consider masterpiece has been brought together by the finest of devilish influences inside as of outside of myself.

To bring all these systems down of inversions,devolution,unnecesary degeneration, systems of any opression who go against ascend,evolution ,and the wellbeing on the long run for and any individuals and groups who are dedicated on the path of dark ascend and also suprisingly including the right hand path .

But not including or focused upon normies or the ones in between unfortunately. But it will affect them regardlesly.

The Mantra can be used outside of this rite upon any waters you deem important or usefull in your craft and work.

The Red Abyss Water can also be used outside of this rite.To open permanent Red Abyssmal Portals on the atmosphere where it whas intently spilled so.(It should be stored in black or brown Pharmaceutical glas.If you have none, normal glas can do the trick but do store it outside of use in a black cloth or black sack. Keep it in a dark place otherwhise the effects are dimmed but notheless are also working).

The working and the angry or hissing breath sigils of Chaos and the Beasts must only be used in the intent of joining the feast/ushering in the portals or for creating the Red Abyssmal bestial water.

If you decide to join in per name and intent means your Daimon and own in this rite produced, created thougtforms are subcounciously working with finedimensional darker beings

Amalek,Dragons,Vampyres,Shadows,Demons,
Devils known and unknown to eat and destroy individuals,systems,governments,selfproblems,groups, technologys nearly anything really who are intended to bring stagnation and the downfall of humanity and its godly potential down, slow (or even faster than expected )unto a sure end. It is especially important for Left hand path because we serve at the end of the day our own inner soul-godly self first than if we choose so other gods-souls.

It is like automatic income.sometimes you get litle extra spiritual evolutionary energys unto you sometimes big and it can bless you holistically.Meaning you can gain many benefits other than just spiritual growth,it can be mental as of physical growth also.

By eating and taking in chaotic energys and manyfold chaotic constructs who are artifically boosted up here in this world to exist you are helping progressing the aeons so that the golden timeline satyayuga can arive earlyer and the kaliyuga are being used properly by us for our dark evolution so that in the end we gain power form this dark timeline by having all these dark energys consumed and used and alchemysed for our ascend. And also helping the other individuals who are on the lighter side bether evolve without to much troublesome chaotic energys who are here and harassing pretty much all these people needlesly, because there is so much of it and unused. It is a win win situation.

Ife been using the Chant of C.Kendalls Chanelled Mantra of the Book of Azazels demonic being Et,liosh

In and out for many times now 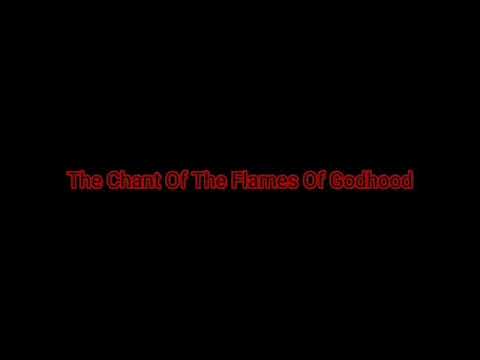 Ife been using this for three days before this came into being. At the same time all the other Ascending rites and meditations that ive done had the side effects of empowering my Daimon exponentially so much so that i can now control my astral body/the daimon in sleep and beyond and lucid dream more at will. And doing journeys and of such. Ife been training my vampiric nature and capabilitys and ife been absorbing the Archetype of the Shark for two days into my self and vampirise its archetypal energys to be a part of myself and my further journey.The conection to the water element in this vision.

So the time came . I had a premonition it would be again a weird sleep phase. And when i had the feeling that im going into a deep sleep my Daimon is telling me like a mantra :DEVIL,DEVIL,DEVIL,DEVIL, constantly before i sliped into that deep trancelike sleep like a warning or spideysense that something is coming.

My being my vision as this shiva as this watcher has breen brought unto a big Ocean where at its beach was standing a big advanced futuristic and beautifull city. The atmosphere was really inviting and something like Hawaii with acoustic melow guitar playing at the background. Really beautyfull.
But this redish devil looking version of my daimon became one with my being as this watcher and slowly i had hearing it sing and vibrate with a voice alike of an chainsmoker.

And with a ghostly monotone rhytm he does this and in the ocean has opened up a big massive whirling hole like a tornado in the deep waters . It is whirling counterclockwhise its colors where blood,red,and black, shining and elegant, threatening to consume the whole city. And at its peak i awakened in a shok by this ecstatic revelation.

I wrote it all down…

THE KILLING VERSES / SIGILS OF THE ANGRY HISSING BREATHS AND BEASTS

Occaisonly i do like binge watching youtube and whats been goin on . And all this Bs in it whas so enough i just went up and go train to relief my anger. I went into heavy mettal mode.
For Reference:

Whas enough to push me to the edge and invited my inner deepest recesses of anger and resentment that i had for all this unnecessary bullshit that is currently runing this clown world.

So these beasts came into being to bring havok to all of this shit inside and out, in my channeled rage. Apocalypse.

THE RITE OF USHERING IN THE AEONIC FEAST

°Anger and Ressentment for the Clownworld
°Your willingness to participate
°A bottle water where there is a activated Red Abyss inside
°The activated sigils
°(Optional for the sigils) needle for blood letting
°space to peform.
°Lighter

Perhaps a warning.This is a one shot thing otherwhise when called by guidance can be peformed many times.But it is intended as one shot think .And only after peformance be repeated when you are called again to do it.

It shouldnt be used for fun or by dablers or unsirious ones you are playing with fire. It can be used as a initiation rite for beginers into black magic in general to say fuck this world (when there is anger or trauma) and make a stamp as a goat into this mud and gain footing on the black obsidian beneath it.

It is not intended for lightsiders, only than when you switch sides and attempt spiritual suicide.break free.

The right hand benefits as a side effect later down in history.

Get the preferably dark pharmaceutical bottle ready wich is filled with water.

Get into a comfortable Position either sitting crossleged or in a chair. Before you is the bottle. Get your two hands beside the bottle the bottle is in between these two hands , the hands are not touching the bottle or anything.It should look like you try holding a ball or sotmething round. If you dont feel like it without the hands can be done also or if you are more advanced the hands are not necessary than.

Look at the bottle intently preferably at one spot, as good as you can.

Do it so long you feel, see, and can recognize in the water is opening up the blood,red,black colorised counterclockwhise whirling tornado Portal to literal hellish dimensions. When closing the eyes your minds vision perhaps sixth sense will be able to at least feel it is now open in the water.

When it is open it will be permament so you can move now to the next step.

MEDITATION AND MUSIC FOR PRESETTING THE RITE MOOD. 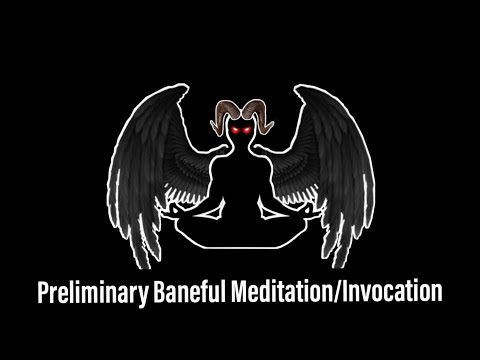 Abyssmal eyes of the hungering Dragonserpents peel trough the ethers into this reality. Hellish Giants destroy the veils of all mundane reality.Cthonic fangs gnar on the establishments of all Order, what shall be Chaos must be Chaos!

Darkness spews upon every fiber and the miniscules of matter, infecting it! Thus the Doors, the holes, the gates, the portals, off all hungry beasts and fiends are wide open!

Bringing Metanoia of Advesarial Powers into this whole world.

Thus I (Insert normal full name and magical name) state now it is my will to participate in this Feast upon the Aeons!

Prick the finger and let some blood driple into the bottle where the portal is active.

Move to the next step

SIGILS OF THE BEASTS / KILLING VERSES 2

Look upon the sigil in anger or any negative emotion(s) you have it shouldnt be long. Vibrate one time its name. State than the killing verse.(Optional-give at this time your blood upon it)
Close your eyes, by inhale see and feel a accumulation of this negative energy in your mouth as black reddish mist.By exhale make a angry primal short hisslike :HA!: Upon the sigil.let it absorb.one time should be enough.

Move to the next and the next, done! Burn it all put the ashes into the water. Spin it and or stir it counterclockwhise. So long the ashes are evenly as good it gets distributed in this water.
Making it into the Red Abyssmal bestial water.

Spill it all into a nearby river,see,ocean, sink, toilet, canal,water, the earth, etc.

Or spill a litle or all it in places where there are important people, places.You deem worthy or important being infected and feeded upon.

Use it in curse rites of vampyrism, or just curses in general.

It can be used as a general empowerment to contact the more darker forms of reality and beings.

But either way it will affect everything really in the maner stated above.And you and we as a black colective will Benefit greatly from it.

THE SIGILS AND VERSES 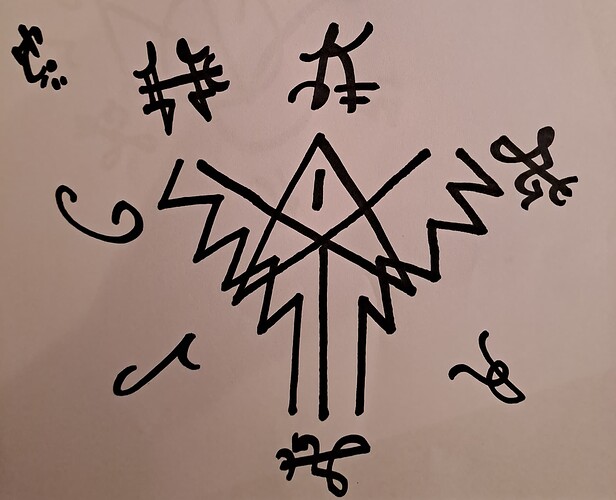 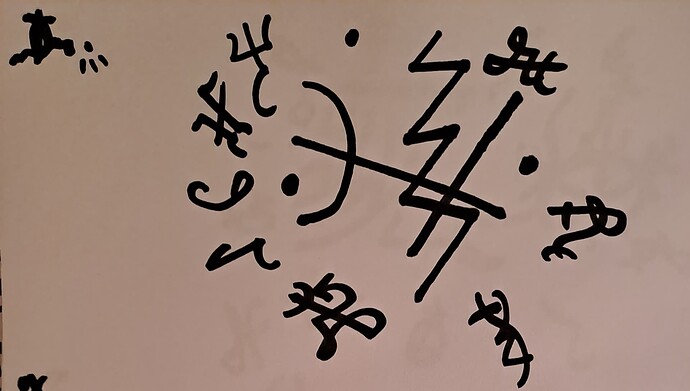 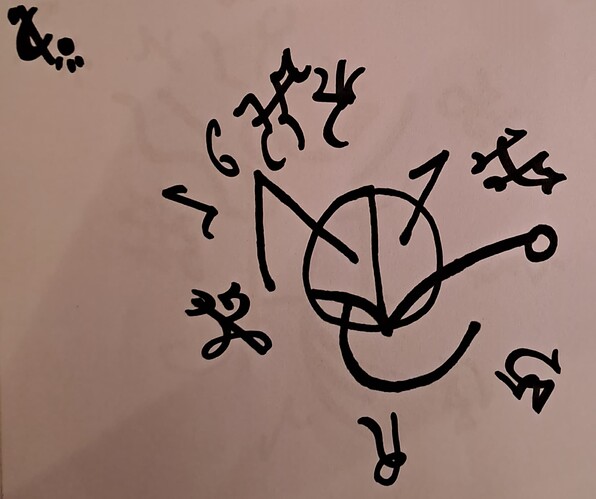 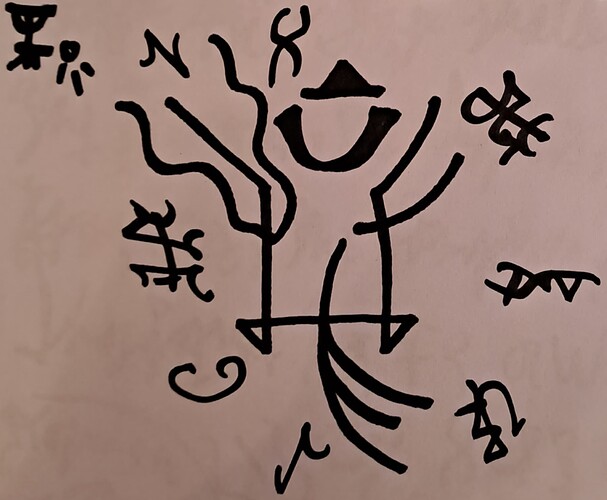 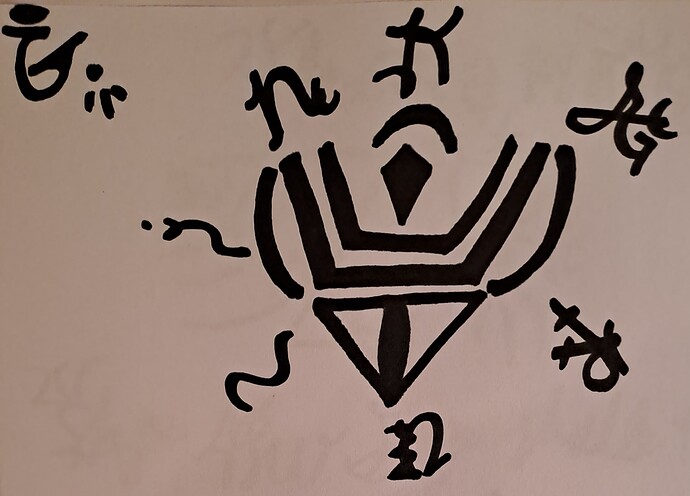 Now do as instructed above than it is completed. Youve helped furthering your and our power and might in the dark lodge. And helping bringing chaos to thinks to where it shouldve been already by nature but its been artificially protected. This is a cleansing process for your being also as of the outher one and the worlds.Expect the worst and best in these tumult times to come. 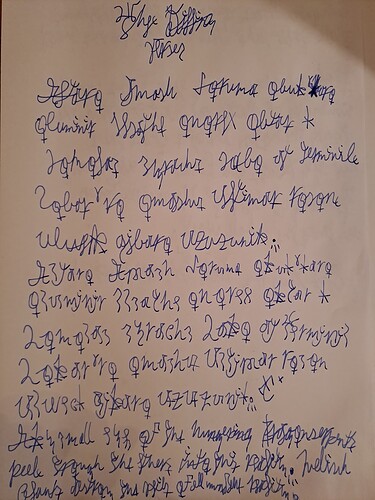 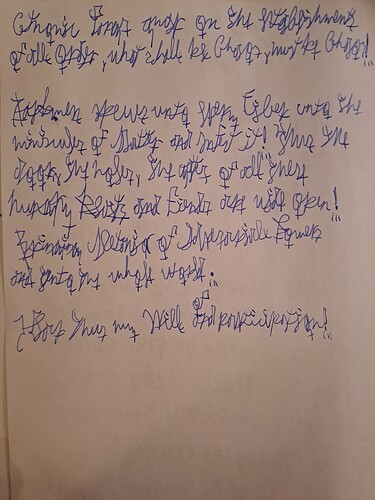 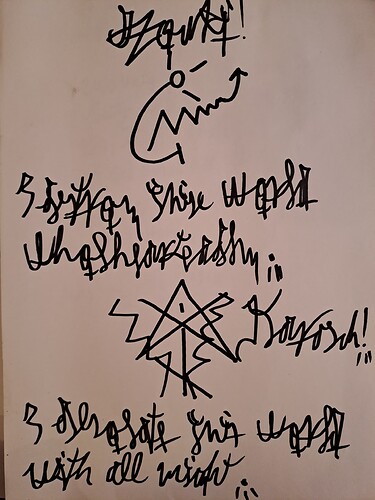 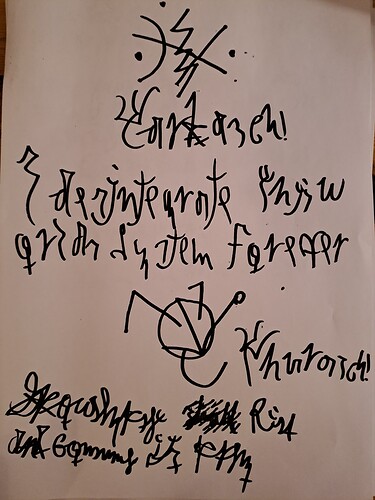 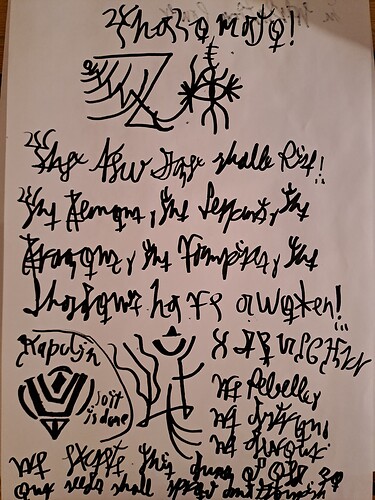 WOW! another nice piece of work man, always blessed with Darkness Absolute, Darkness Eternal.
May the Darkness bestow all the blessings/darkness upon you. 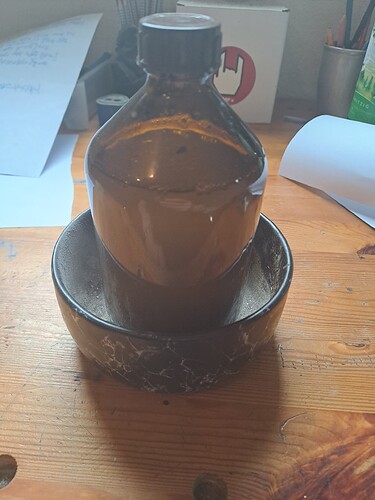