From those to whom much is given, much is expected.

Today’s musings on the Law, concerning “mental diet” or “inner conversations”. Basically, the thoughts we have in their entirety, whether they’re imaginary scenes, imaginary conversations with others, or our own inner monologue speaking to us in voice or in image or in mood or feeling.

When I have a negative thought now I catch it and ask, “whose thought is this?”; if a negative feeling or scene arises I ask "who does this belong to?"

Or does it belong to the ego, the “old man”, the person or the narrative that you are leaving behind?

And of course, always, it’s the latter. And as soon as I acknowledge that, it is so damn easy to shrug it off and brush it aside. Does this thought serve me? Does it empower me? No? Then it doesn’t belong to me, and I won’t waste time dwelling on it.

This goes hand-in-hand with the thing I mentioned the other day, so is usually followed by: I am a new person now. I am someone who is X, who deserves Y…

I named this journal, in its current state, after a spaceship from a video game.

But it speaks to my current journey, I suppose.

Most of this I write for myself, so I can look back in my dark days and realise the things I’ve learned along the way. I know the Law is not about forcing happiness. I don’t believe I need to force myself or convince myself I’m in a good mood at all times so I can “raise my vibration” to “attract” good things to me, or else I’m doing something “wrong”. I don’t believe in ignoring my human emotions when they arise, I just don’t think it does me any good to wallow in them. (Except for, you know, the occasional breakdown.) Better to remember who and what I am, and what I’m capable of, and focus on that.

I don’t believe it’s about forcing anything, or even about performing exact techniques in the hope they’ll bring you what you want – like you’re building IKEA furniture and if you put one screw in the wrong place you’ve fucked the whole thing up. It’s not like that. It’s more about changing how you think about things, on the micro and macro level – from your inner, unspoken, unbidden, subjective thoughts, all the way up to how we perceive the outer world as objective reality. Accepting and acknowledging and allowing.

I leave with this:

Nothing is true, everything is permitted.

I don’t believe in ignoring my human emotions when they arise, I just don’t think it does me any good to wallow in them.

This was one of the first things I learned in therapy so this seems to be a universal truth about emotions.

Also, lol. This letter has been sitting on the bench for a while but I felt compelled to open it just now when I was going to the fridge for another glass of wine. 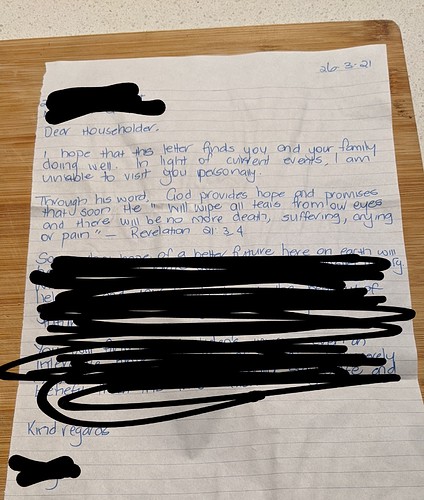 “He will wipe all tears from our eyes and there will be no more death, suffering, crying, or pain”

Yeah, definitely glad they couldn’t make it to my door

I always tell them I appreciate the work they’re doing but they are barking up the wrong tree.

Reminds me of when I was a teenager, chatting with my friend as we took a train into the city. A stranger overheard me complaining about something or other and before he got off at his stop, he tapped me on the shoulder, said something pithy that I don’t quite remember, and handed me a note which said “with God, all things are possible”. At the time I just laughed with my friend at the audacity of this person (my country is very secular and trying to find a devout Christian is like trying to find Chansey in the Safari Zone); and I crumpled the note up and threw it away as soon as I got the chance.

I wish I’d kept it, honestly; if I had, it’d be framed on my wall right now. The difference is now I recognise that God is consciousness, and the human imagination, in which indeed all things are possible; rather than being some fairy-tale for borderline delusional people who couldn’t face reality on their own terms (as I thought of it as a teen, no offense intended to any traditional Christians).

Adventures from the BALG book club:

Confession: I did nothing yesterday. The two days prior I was focusing on the same sigil but was having trouble concentrating or pouring effort into them.

So, tonight I finished another working and then immediately went into the pathworking with Elubatel. It was odd, I had a hard time connecting at first. Possibly because I launched immediately into it after another unrelated ritual with no formal dismissing or banishing between. I went over the pathworking about three times total until I felt a solid connection.

Aiming for invocation, I asked him to imbue me with Wisdom for 10 days, unless I call him earlier to dismiss him. In between his pathworkings I gazed into a lit candle for an unreasonable amount of time, then at a blank wall, hoping I’d get something similar to the Uiazel rite. Nope.

Still felt difficult to connect to Elubatel using the pathworking from the book, but I did get there eventually, although there was very limited communication. I did get something about wisdom being the benefit of experience, the knowing of things and the understanding that a simple, minor change in perspective can let things be perceived entirely differently.

Weirdly I feel like I’ve had some magical callous (for lack of a better world) growing from inside to outside (maybe my brain’s representation of my greater “core” beliefs) which in the past few days has expanded beyond the bounds of my physical body. So, it was something of a struggle to let him in. Oddly, it was converse to the ritual I’d just completed prior, where I felt that the “core” was useful in getting the immediate attention of the entities I was trying to connect with.

So, I have let Elubatel in and asked for his wisdom and guidance in all things for the next 10 days. I may or may not continue with any of his sigils.