Tiamat's Old Forgotten Pleasure Palace: Enter at Your Own Risk

Warning: Enter here at your own risk. I am not sure what is still laying around, or what is in every nook and cranny.

Have all your defenses up, and even ask one of the gatekeepers if you should go before trying this.
…
Enter the palace of Tiamat’s last hooray.

forgotten_castle_ruins_s_by_jameswolf_d9typ8k-fullview.jpg1000×483 74.1 KB
Be laying down and listening to some music. Imagine a black wormhole, feel your astral self shift form.

Ask the gatekeeper to take you to their Mother’s old pleasure palace.

When you land, see, and look down at what form you have taken on. That’s is one of your strongest ones.

Explore the ruins. FEEL what long ago things that, even the gatekeepers were not allowed to take part in.

This was one the last places Tiamat had going before going into her death-sleep.

When done, leave from one of the many water gates. Don’t leave by land or air. Always by the waters.

Is it an astral place?

It’s a actual place that can be astral visited.

Why is it dangerous to go not through water?

It was heavily guarded back in the day. Tiamat loved her pets. So one might be still wondering around.

maybe talk with Tiamat before go there ? 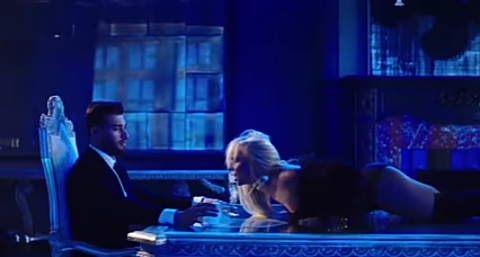 I’m trying to figure out is that a metal collar? I have a thing for collars

But my favorite are leather. Oh, the smell of leather.

What is the relationship with his tiamat ???

I want to make a new thread for this, but I trying to keep my shit all together and not clog up the forum with a million different threads.

So, I have been trying to bring Tiamat more into my daily life. I am naturally a prude in real life. I feel a certain freedom here, that hasn’t always translate into irl. I have, and certainly capable of doing irl shenanigans.

Mostly, I have to feel safe and secure before I let my slut out to play.

Anyways, I downloaded this scene from them today.

Satalos was completely nude. He was sitting on a chair in his tent. She had ran away again.

She was brought before him naked and whipped marks on her back. She was forced to her knees.

‘Do you think you can hide from me when incarnated? You tried to escape from when you tried to die billions of years ago. We brought you back O’Sea. You owe me, Everything!’

'You and him murdered our family, and then not just one Old One, not half, not 99% all of them. What? To keep yourselves fueled up for your stars and children in your different creations.

You even killed me, O’Sea. You, whom was the most treasured and most beloved by all. You, whom turned monstrous and cruel.

You, turned on all just for your one true forbidden desire. It is all for your, Lightbearer. You, that destroyed all and laid waste just for him.

You mated with him more open and freer then with anyone. You birthed souls back into being, give them heavens and hells alike to call home.

O’Sea, you just wanted to give life, and all you had to become for that was to be the enemy of the One.

Those that hid and watched was jealous. His light was utterly, and totally absorbed by your darkness.

She bowed her head and started to wash his feet. It been a secret thing between her and the Lightbearer. Now, all that sweetness that had been between them, would go to other.

He saw her tears and said nothing. She was gentle with her touch. He was nothing but patience with her. As she took the greatest of care washing and drying his legs one at a time.

She kneeled and was still before his hard cock. Her head was lowered. Neither one saying anything. She counted down from ten and just went for it.

He watched as her body switched as she came from his words alone.
…

Check out my thread about the Lightbearer (Lucifer) for reference.

Please. If you have you a problem with this story keep it to yourself. This is extremely private tale. I’m not in the mood to share it. I was asked to by him. … He had pretended to be a god, this fallen angel from a different heaven. He traveled into other creation, far from his own. Here other gods ruled. There were no angels to be found at all. He searched high and low for the sacred place of the gods. They were having a party to celebrate the birth of the prince, to replace his older sist…

Who is O’Sea? (Also, how do you pronounce her name?)

It’s the meaning of Tiamat’s name.