The whole “angel vs demons” thing …

I wanted to start getting more into the higher cosmic and celestial beings like angels and other higher ascended masters.

I never really bought the whole satanism stance on the goetia or anything like that.

I always figured demons where old gods who where ascended masters themselves but operate on frequencies and planes closer to ours than angels.

Angels on the other hand operate on a cosmic level and on higher spiritual planes than the demons. They belong to a different order and don’t tend to grant earthly desires in exchange for recognition or offerings the way demons do.

I’m under the impression the way they do everything is for the better of your spiritual advancement and the universe whether you like it or not.

I’ve personally never evoked anything of the sort but this seems to be the gist from those who have worked with both.

I find it hard to try and explain this to people when I tell them my occult beliefs and how I’m pretty sure it works. The people I see touting the whole “ Armageddon war” the most are self proclaimed luciferians and satanists.

Then other people will wonder how I can believe one type of spirit isn’t bad but the other isn’t either.

The goetia is literally paganism with eyeliner , I like the dark aesthetic too but the whole war thing sounds so juvenile and edgy to me. Let’s be real dude. The lesser key was a translation of his work iirc.

Are there some angels that don’t like or work well with certain demons ? Absolutely. Their energies don’t match. That doesn’t mean anything though.

If the whole “dark is good and at war with light” how do you explain demons like king Paimon ?

I’ve personally had strong visions where Im pretty sure it was him and he’s radiated such strong light I can’t even make out the shape of him. It was blinding. He’s a being of light.

Just wanted to see what other practitioners thought of the subject and if how I think seems to match their experience.

I’m not claiming I know the answers but the whole nfl pick a team bullshit makes me laugh. It kinda reminds me of politics.

I’ve literally read that if I try working with one the other will zap me into a pile of ash so to speak.

They’re two sides of the same coin, in my opinion. They have personal disagreements, and fights, just like any siblings.

I work with both angels and demons regularly without issue and never bought into the religious propaganda of either the LHP or the RHP ideas of a “war.” I don’t see either of them as all good or all bad, as both types of spirits can be absolute dicks.

If the whole “dark is good and at war with light” how do you explain demons like king Paimon ?

I’ve personally had strong visions where Im pretty sure it was him and he’s radiated such strong light I can’t even make out the shape of him. It was blinding. He’s a being of light.

The first time Belial appeared to me, it was in a dream. He was made of bright light in a white room, couldnt even see his face. People says he is a really dark spirit, and I do believe them, but I’ve seen another side of him.

On another hand, I don’t have much experience with angels, but one of the first I got wasn’t that pleasant, so I don’t buy the “light is good and dark is bad”.

I don’t either. I think it comes down to who you’re calling on and how they feel about you really.

Its really going to depend on who you ask. My background is in RHP kabbalah and now I’m studying and immersing myself in Sitra Ahra the other side, the tree of death.

What @DarkestKnight was saying about both the angelic and infernal spirits can be very destructive or hard to deal with. They are very much different sides of the same coin.

You can work with both angels and demons. You have the right to commune with any spirit in the universe, that’s your divine birthright. Having said that I find it easier not to mix the two during workings. Trouble can and does start that way. 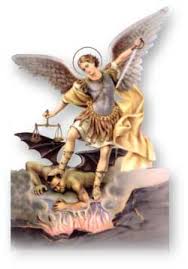 Let me ask you do these two beings look like friends to you? No!

Are archangel Raphael and Azazel friends…No!

Are King Asmoday and Raphael friends…No!

People that think the angelic and infernal love eachother and are friends have seriously have things [email protected] up. And that’s real!

that looks like something from a Abrahamic text or religion

I don’t buy into any of that ideology so why would I take something a religious drawing says seriously ?

Not sure why you’d use something like that to prove your point , especially in a occult discussion

All forms of magick and spiritualism are evil according to “gawd”

@username666 Dude the legend of Arch Angel Michael defeating Lucifer and casting him from heaven is pretty textbook stuff.

If you want to talk about abrahamic religions and your distain for it, then why don’t we throw the Goetia of King Solomon in there too.

My point is these are references and resources we all know of even if we don’t agree with so don’t make it seem like I got from the philosophers dollar store.
Angels and Demons aren’t usually friends or even on civil terms.

@Mike_Bee i never said your experiences didn’t have merit and I never said angels and demons where friends.

Thanks for your input either way.

Fair enough and I’m not arrogant enough to tell you you’re wrong, only that I disagree.

If they are friends is hard to tell. But from my personal experience they can tolerate each other pretty well

Just wanted to see what other practitioners thought of the subject and if how I think seems to match their experience.

Personally, and not having any kind of JCI background, and not having a place in my worldview for “hell”, “heaven” or “the infernal” except as astral locations and naming conventions created by humans for humans, I don’t even bother with the terms “angel” and “demon”.
They’ve got too much baggage and mean too many things to too many people to be helpful.

I don’t find there to be a significant or consistent different in what the entities are, and I don’t find the A lists and blacklists that older authors chose to put these entities on particularly relevant or useful, it’s more like thier opinion about the relationship they had, and may or may not translate into your relationship.

What does matter, is the current and techniques, and expectation you use to talk to them. This adds a lot of flavour and leads you to talk to a mask, an aspect, or otherwise lensed version of the entity. If you have rosy glasses on for some and not others, it changes things, because the operators energy is paramount.

My feeling is most Goetia are ascended, or higher, beings, they’re either the same level of ascension as “angels” or higher, if they are deity level. This is less true for grimoires like, grimorium verum, where you get a very mixed bag, and mentions of hordes of angel that are too low for the author to have bothered listing them.

Then you have books like E.A. Koetting’s Kingdoms of flame where his feeling, of the categories of entities he channeled there, heavily JCI influenced, was that there were angels, demons and spirits that were neither. In the Book of Azazel I feel all the “Nether lords” are what I call “ascendeds”.

What’s not ascended is “of the earth” which is more like “of the physical”. That’s your fae, djinn, ghosts, some ascended masters/Bodhisattvas but not all, thoughtforms and egregores created by humans, shadow people, aliens sentiences, Lwa and cryptids.

I have never had an issue with the human cliquey politicoreligious, and imo egocentric agendas, affecting what the entities themselves do and who they can like and not like. There’s no human on earth that can tell Azazel he can’t talk to Daniel if he wants to, for example.

Also not forgetting, time is a tricky thing and things change, something could have been alluding to a real relationship issue 200 years ago, but it could be resolved by now. Nothing ever stays the same. We forget how the physical is a super low entropy environment, which I think the higher dimensions don’t experience the same way either. It’s a mistake to try try to project human values one for one onto ascendeds for this reason alone. They don’t have the same environment we do and that has impacts we can’t remember or imagine.

Spirits fight each other all the time for influence. Angels fight angels, demons fight demons, elementals fight elements, etc. These fights are not like what people think with swords or weapons, instead it is a battle of influence over souls. The goal is to get a person to align energetically to a spirit, more or less becoming a part of that spirit.