You are probably confused for the same reason I’m confused why people always confuse Santa Muerte with San La Muerte. Their name being similar doesn’t mean they’re the same entity.

Im. But it was years ago a guy call master de luz who come from Argentina and sold a lot of booklets, from diferent tradicions there, j hesr of tis guy bfre,? He disappeared while ago.

I’m pretty sure I already know the answer but I’m gonna ask anyway to make sure. Is Qayin a good entity to work with as a beginner? Probably not, right?
Another question, is the current 218(182?) a good current to go down, again, as a beginner, or more specifically a beginner necromancer?
Judging by what you have said thus far I assume that the answer for both those questions would be toward no.

No. No to both. As I’ve said numerous times this is not a path I would reccomend to other magicians, no matter the experience level. Of course I am not telling you no you can’t travel the current 218, I’m just saying I don’t reccomend it. By all means anyone can do whatever they want, but if they do they’ll quickly understand why I said I can’t reccomend it. All I can do is speak from personal experience working with 218 consistently and dedicating myself completely to the work of the current. From my experience current 218 is a dead end street where you’ll see things you can’t unsee. Think of the spirits of people who committed suicide. They’re dead. Would you want to feel what they felt? Would you want them walking around your house while you’re asleep? Sorry I’m rambling, but no I do not reccomend current 218 witchcraft to beginners.

I’m curious, and I hope I word this well enough because I am not trying to be offensive, but as someone who hasn’t read the books, what does this current offer the magicians who are drawn to it? What are some of the basic practices or an overarching ideology?

This is a current I have never encountered, which is a rarity for me these days, so I am extremely curious about it.

I technically can’t answer that. I can’t say what this offers to other magicians. I can only share what it’s done for me. I think if anyone were to chime in and say exactly what it can offer you would be foolish. I don’t know what you’ll gain from it. I gained strength from it. Alot of strength. Through current 218 I was able to face the things that hurt me and caused me pain and overcome them. In a sense I’m dead to my former self. Current 218 is meditating on death, lots of meditating on death. Too much for most. In all honesty to anyone really drawn to the current I would suggest first reading Walking The Twilight Path by Michelle Belanger. Her book is not current 218 and not related to the current in any way, however I think the ideology in her gothic book of the dead (as its refered to) lays really good ground work to prepare someone for diving into current 218. The current is very chaotic. It forces you to face your own mortality. In explaining the ideology of qayinite sorcery to an outsider, and as silly as this sounds, I’ll reference a saying from game of thrones. “Valar morghulis” which means “all men must die” which is followed by “valar dohaeris”, meaning “all men must serve”. The ideology of this current as I see it boils down to simply “in this world nothing can be said to be certain, except death and taxes”. The work of current 218 is the work of memento mori.
Here’s an example. One of my most prominent experiences with the current was when it was revealed to me that there was nothing after I die. Meaning that once I’m dead that’s it. Meditating on this it horrified me to the point of having nightmares and PTSD. It bothered me for months. I was terrified and regretted ever touching the falxifer grimoires. It felt like it opened a hole in me, an empty space, and I couldn’t stop dwelling on it. I felt like I was drowning in the regret of literally opening myself to death. I clinged to Qayin like a lifesaver floating in the waters of the current. I learned to overcome this awful feeling I was getting by bettering myself, which like I said before, I’m essentially dead to my past self having literally felt myself die, and other people die because I allowed these spirits to influence me by opening myself to the current. I came out of this experience deeply in love with Qayin. So much so I made a blood pact and tied myself to him (this was after the horrifying experiences I was having). I found alot of strength and courage in this tradition that I never could’ve imagined before. The ideology of the qayinite witchcraft tradition is the knowledge of death, and harnessing death to your benefit. But, as I’ve said numerous times before, I don’t reccomend this path to anyone.

I was very intrigued by your thread and I somehow feel enamored by your work as a necromancer. I have a question, though which is perhaps the reason I became drawn to this thread was the topic on Qayin. Has he ever shown you any or more aspects of himself other than just Qayin? I know Tubal Cain was confused as Azazel before in some other thread I read. I really don’t know.
Also have you ever come across a Death God named Mot as well? I’ve come across him several times, but now he goes by the name Death and that is all. I am not experienced in necromancy, but I explore into archetypes and energies of death.

Wow you are a very strong woman to walk this path. Azrael is so not like this so idk why anyone would confuse him like that. He’s an archangel, completely different.

I’m surprised that there are people who actually confuse Qayin for Santa Muerte and Azrael. I was under the impression that them being different beings was common knowledge.

Still, this is an interesting thread. A lot of the information resonates with UPGs I have about Qayin.

I was wondering if you could confirm something for me. Some sources claim that Qayin was a son of Samael. Is this true?

I’m surprised that there are people who actually confuse Qayin for Santa Muerte and Azrael. I was under the impression that them being different beings was common knowledge.

I wish I could say I was surprised. Occultists these days seem determined to find the flimsiest of connections and from that randomly conclude that this and that entity are the same. Its KINDA starting to get on my nerves a bit.

I was wondering if you could confirm something for me. Some sources claim that Qayin was a son of Samael. Is this true?

Qayin is the first born of eve and the serpent, the serpent was a form of Samael so yep, that is true.

I wish I could say I was surprised. Occultists these days seem determined to find the flimsiest of connections and from that randomly conclude that this and that entity are the same. Its KINDA starting to get on my nerves a bit.

Qayin is the first born of eve and the serpent

Firstborn? They had more children together?

Hmmm isn’t Qayin son of Lilith and Adam? Abel is the son of Adam and Eve

Firstborn? They had more children together

Is not Asmodeus one of them?

Abel is the son of Adam and Eve

Cain and Abel were brothers.

Firstborn? They had more children together?

Ah yes that is true, Qayin is the son of Samael and Eve

Have you read any of these book: 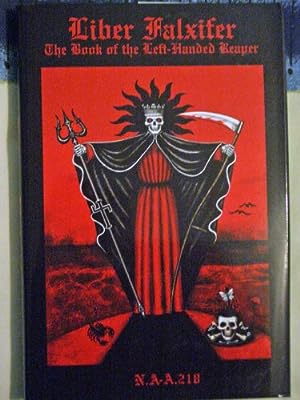 Liber Falxifer: The Book of the Left-Handed Reaper

and probably others. Since you’ve treaded this path for a while I’m curious on your take of each of these and how accurate they are to your gnosis on the subject.