Okay here it is. During my time with this forum I’ve come to realize that very little is known about Qayin even in the occult community. I’ve done an exhaustive search on this topic and almost every time Qayin was brought up in the history of this forum’s existence he was either synchronized with other deities or people will say something about him and his witchcraft tradition that simply isn’t true. Most people who will hear about Qayin in passing will make ridiculous claims like “its just the angel of death Azrael by a different name” or “he’s basically Santa Muerte”. Or people will hear about his grimoires the Liber Falxifers and speak for them without actually having knowledge about them, without devoting time to read them or understand them. I find it surprising that there is no real knowledge on Qayin on this great occult forum. I find it more surprising that he is never brought up here, in the necromancy section. So myself being a devout necromancer of this witchcraft tradition and follower of Qayin (apparently the only one on the forum) I thought I should make a post to explain Qayin.

Qayin is not to be synchronized with or confused with any other deity from any other culture. Qayin is cain from Hebrew scripture. He murdered his brother Abel, was disowned by his family, became a wanderer of the desert until founding his own tribe, the cainites. This tribe would later become known as the serpent bloodline and Qayin as the witchfather. Prominent members of this tribe include Qalmana, Qayin’s twin sister and Tubal Cain (Tubal Qayin), a descendant of Cain who ironically is always synchronized and confused with Cain himself (why is this so common in the occult community?).

When cain murdered his brother Abel he became the first murderer. The demonic legions took Qayin under their wing until Qayin evolved into being a great demonic spirit himself, the lord of death. This is why it is foolish to compare Qayin to someone like Santa Muerte because she’s a saint of death, venerated by some catholics. People pray to Santa Muerte for matters on love and money. That is not Qayin’s purpose. Qayin has no concern for matters humans generally pray for.

People who worship or follow Qayin are outcasts. True outcasts not angsty teenagers who wear all black who mom and dad “doesn’t get them”. Qayin is worshipped and followed by those who have known great pain and loss. Murderers, people who contemplate suicide, people who have been greatly hurt, people who know the bitterness of being alone.

Qayin is the personification of your darkest deepest pain on the inside, stuff you probably don’t even know is there. Remember, he murdered his brother and was cast out of his family, he wandered the deserts until slowly over time building his own tribe through his descendants. Since he was the first murderer his followers in the present age venerate him for knowledge of the mysteries of death. This is why I always say that this path is necromancy in its most purest form. We don’t just wave a crystal around or move a planchete around on an Ouija board and call ourselves witches and necromancers. We get our hands dirty. We steal from the dead, we employ soil from the graves of suicides snd murderers, we take human bones and fashion them into tools like bowls to drink from or trumpets to call the shades of the dead, or we use the bones for fetishes, we make demonic ngangas to house spirits that others are afraid to work with, we sacrifice animals to Qayin, we seek to become one with the current that is current 218. Current 218 is anti cosmic antinomianism. It is not satanism, it is not Luciferianism, it is necromancy in its most purest form, the worship of death itself.

Here is some of the most relevant associations linked to the lord of death and his sphere of influence within the Qayinitic line of sorcerous practice:

This list would have been longer but I cut it short.

The purpose of this post was to show that Qayin should not be synchronized with other spirits. And that this path, the path of current 218, is a very lonely and solitary path, and it certainly is not for everyone. Speaking from personal experience this path nearly drove me to suicide (I got so close) and gave me horrible nightmares that terrorized me for months until I learned to work with the current, not let the current drive me insane. It left behind a mark though, the mark of Qayin. People who seek this path are called to it. They feel it in their blood. The ones who do follow the path of current 218 are NOT following it because its symbolically similar to a deity of a different culture. If you want to pray to a deity for money or a new job or give offerings to a spirit in the hopes that it will in return make someone love you then look elsewhere. Qayin doesn’t care. He won’t help you. I hope this helped shed some light and clear things up concerning Qayin, a spirit very left in the shadows even in the occult community. 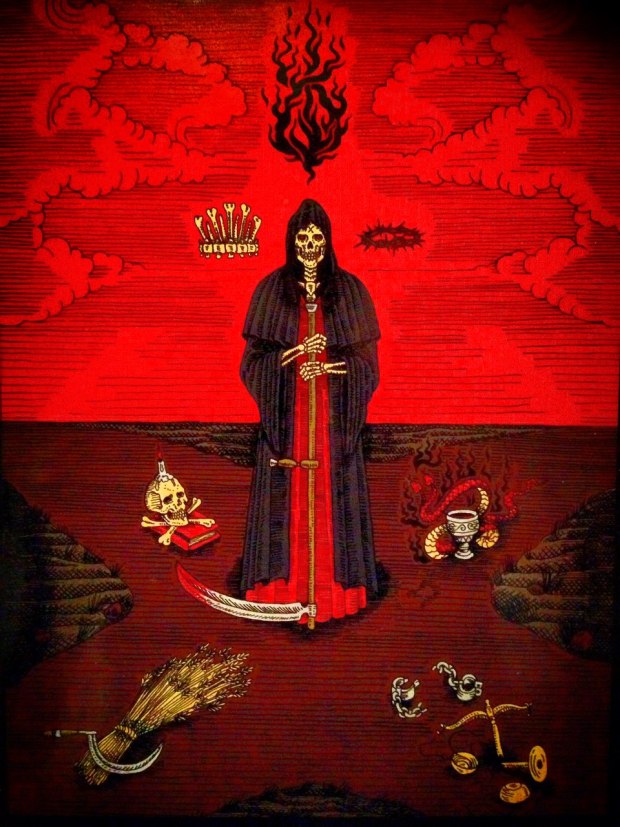 Thank you so much for this post.
You have gathered a lot of info about an entity I didn’t know about.

Also, I reckon that there is a lot of shared correspondent symbology with the Zodiac Scorpio.
Is there any reason for that, or just casualty?

There is no correspondence with Scorpio that I’m aware of. Although, oddly enough, I am a Scorpio. So maybe there is something of significance there.

There is no correspondence with Scorpio that I’m aware of. Although, oddly enough, I am a Scorpio. So maybe there is something of significance there

Me too. And all that you wrote resonated deeply with me.
You seem to know a lot about this branch of occultism. Maybe you can find a link between them.

Maybe. I’ve devoted my life to the work of this witchcraft tradition.

This actually answers a question for me. I have been curious about the link between Cain and Tubal Cain in traditional witchcraft, as I know some people who have worked with TC, but couldn’t say much due to coven oaths. Very interesting stuff. I definitely will be looking into this current more.

Very wonderful post miss, he has drawn my attention and I may very well purchase the tomes. Thank you for shedding light

Ok, a few things 1) you’re not the only one around here who works with the series from Liber Falxifer. Reading the different threads on the forum makes that very clear. 2) when practicing Qayinite witchcraft you don’t steal from the dead, not at all! Buying what you need from the dead is talked about in the first book. 3) there is a connection to Scorpio in the way of Niantiel, the qliphothic tunnel leading from Venus to Tiphareth. 4) after all these years I have never once thought of qayin as a personification of your deepest darkest fears, I’m not sure where you came to that conclusion, perhaps you’ll have to explain that one because my experience is way on the other end of the spectrum. 5) if Qayin has no interest in the things that people generally pray for then how you explain those very things like love, money, protection, etc all being discussed in detail in book 2? And FYI, 218 is the overall current of the qliphothic magic of temple of the black light. Qayinite witchcraft is current 182. If you have read the books in pdf, or own them, might want to take another look at them again

Niantiel, the qliphothic tunnel leading from Venus to Tiphareth

That is not Qliphothic. That is the Sephiroth you are talking about

The only Niantiel I know from the Qliphoth is Nun-Niantiel, with references to both Mars and Scorpio.

But that connects Gharab and Tagimron no?
Venus and Tiphareth are their Sephiroth counterparts.
Or am I getting muddled up?

I don’t need to take another look at anything. I know my Qayin intimately. If all you know of Qayin is what you read in the falxifers, then I’m sorry but you’re the one that needs to get to know my master better, not me. He was not born in the falxifers with the black metal band dissection. Thinking he was is foolish. So what do you know of Qayin that wasn’t written in the past decade by a black metal band? Qayin is the same Qayin from Hebrew scripture that was sent into the desert to wander ALONE. I never said Qayin is the personification of one’s deepest darkest fears, perhaps maybe you need to reread what I said. He is the personification of one’s deepest darkest pain. Yes pain and fear can sometimes go hand in hand but they are not mutually exclusive. Really, I think alot of this could easily be cleared up if you simply read what I wrote instead of reading one or two lines then jumping all over me attempting to discredit my post or the one I’m passionate about. Once again, I know Qayin intimately. I do not need to be told what he is or is not. Perhaps maybe if you were more than just a reader or a dabbler things would make sense to you. I am fully aware of the rites of buying soil from the dead. I keep a jar on my dresser in my bedroom specifically for when I need to buy said soil. But this is what you are not understanding. The soil is not being bought from the dead but from the lord of the dead, Qayin. When the soil is taken from the grave the resident of that grave has no say in the matter. Are you following now?

No you’re good, I couldn’t recall the qliphothic names off the top of my head and too lazy at the moment to look them up lol just woke up for the night, gotta love working graveyard shift

I do love me some Dissection and Watain

But tbh Dark Funeral has my heart

But you haven’t answered my question about the relationship between Qayin and Scorpio.
You have just stated some random symbolic correspondence of Scorpio with the Qliphoth.

I am confused af.

It was a book homemade who speak of him. No the books series i tnk by master of luz. Or im confused whit senor la muerte 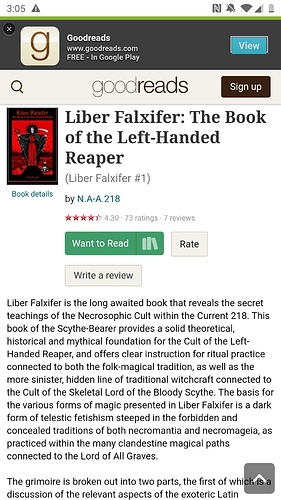