People already know about Satan being Adizon Narkhaiil so i’m going straight to His relationship to you now: 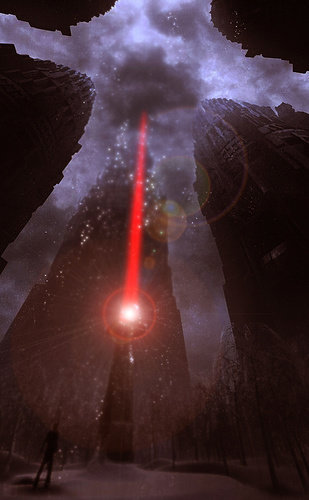 That source of light is the gravestone of Lokthoriel Narkaiil and the huge towers around it are the city at large which is as wide as the European continent and is filled with this towers that each represent his accomplishments as King Lokthoriel Narkhaiil the Grand Demon of the Dusk that he accumulated during a lifetime of about 5 to 6 billion years!

So this is the voice recording of Grand Master and Lord Gorobath Nakkhar that was playing every hour or so from his gravestone to be heard across the Memorial City:
So this song i felt is appropriate for what follows:
Breach the Void: Ruins

"This is the memorial dedicated to our beloved Lokthoriel Narkaiil so listen carefully and honor this place! So here’s the story of this mighty king’s death narrated and displayed by Grand Master and Lord Gorobath Nakkhar:
The Battle rages against the invading forces of the worm. Our kings are fighting side by side to defeat the worm. In an attempt at severing the head of this manifestation of Keteron, Lokthoriel Narkaiil is killed by Keteron.

His father Adizon Narkhaiil Grand Demon of the Night, Sees that happen and in a rush of mad fury he takes his true demonic form and charges at Keteron like an unstoppable force.

He hits and hits at the worm with his sword and magic until he completely severs its head and body.

But the battle did not end as Keteron has an egregoric source from which it can manifest many more bodies.

The war continues but Adizon Narkhaiil’ s son died so he takes him in his arms:

“I’m here for you son!” Adizon Narkhaiil tells his dying son with tears of raging fire coming down his demonic eyes.

“-Cough- Dad! I couldn’t… -Heavy cough- … I’m sorry…” Lokthoriel Narkaiil dies in the arms of his father as his torn body disintegrates into ashes and fire giving creation to more of the Axa Oddra essence and more life in the battlefield of Bazuun.

Adizon Narkhaiil Shouts to the sky in infernal rage cursing Keteron and swearing that he will personally hunt down the fake god even if it takes eternities and even if he has to burn down all the universes this worm is feeding from!

At last, the sky turns red with sadness and fire starts raining down at the command of Adizon Narkhaiil. The sky is red for today is the bleak day Nadharkis as lost a most beloved demon king and a leader in the evolution of our Mother Nature."

His gravestone was beaming the visions of that battle into my third eye as i was hearing the barking voice of Grand Master and Lord Gorobath Nakkhar as he was narrating. But the parts where Adizon and Lokthoriel speak i was hearing their voices.

It seems that the gravestone was charged with all the grief of his subjects that loved him cause i cried for the better part of an half our. Lucky i was alone in the house…

Wow, I felt intense energy and anger while reading this

Exactly like me bro! Imagine it exponentially multiplied like times 100 when i was in the actual ritual!
I felt all the grief and anger towards the parasite god that killed @AlphaC then so i was having one of those war cries!

Just to recall me and Lucifer were enemies in Nadharkis right?

Yep… If you were to return to Nadharkis you might still be Enemies but in this Universe are Family…
You Were like family/enemies much like Cerberus and Belial are enemies/brothers in Nadharkis.

I was asking Cerberus the other day why is he this impossible gatekeeper level entity in Nadharkis And why is he fighty Belial so he answered with this words with a barking voice:
“Training ground”

I could only presume that he was referring to the role he is playing in Nadharkis is for his training and evolution as he learns from Belial.

The Tura Titan if i’m not mistaken held up the foundation of chaos for the Dark Gods that were above the Titan, strange you mention this because i’m working with a moon of saturn which is called Titan.

The entity that led me there is

The Truth Of The Crooked Man - I Faced Him Spirits, Evocation & Possession

OMFG that’s all i can say, okay so if you don’t know what this is about read these below … Okay so this is what happened i called on the nine demonic kings, i called on my ancestors, i summoned the gatekeepers, then i asked the aid of lucifer. I made a infernal triangle The power of the nine demonic kings, lucifer and the gatekeepers, i directed that power into the triangle, it glowed with so much infernal fiery intensity. Anyway i digress the ancestors empowered me and so did the legions …

Yeah i’ve read this post which is why i’ve mentioned you as soon as i started writing about the Tura Terror… Very fucking interesting. The synchronicity is just epic…

You think these Sigils are a gateway to the Titans?

Dunno and don’t want to go there yet. I would not recommend you to go there either that’s why i’ve asked the help of @C.Kendall for these sigils. Try talking to him about them but only if he is willing to help. They seem dark, ancient, evil, and VERY POWERFUL!

Who you used to be In Nadharkis is much more that who you are now. Back then you could have handled the darkness now you should ask the help of someone that is deeply delved into the darkness like he is…

What sorceror are you going to meditate on next?

So next is @Shadowmage then @KingOfHearts616 next is @Noxxshroude then is @astaj and then is you. I have someone new after you but this is how it goes

How many more are you going to be able to do today?

Lol, then take a break.

Don’t think this is a process that should be rushed. One per day or couple of days is probably a feasible time frame. Don’t want to wear @anon72351403 out plus @anon72351403 you have your own life. I know some information from my own trip but I won’t say anything yet because I don’t want to bias your visions with something I may have picked up and misinterpreted.

Leave you to it guys. Night! Just don’t go too off topic. Try to bring back the discussion to the subject of Nadharkis cause in the end i’m doing this to find ways to break the veil and open a physical gate to that place so that we may all return home one day.
Night, night!