The Day After Ragnarok: When Gods Die and Return to On A Copy of Earth

So, again you think the entirety of new age mythology would be wrong if it contradicts the old mythology of atlantis?

Which atlantis fantasy? there’s literally a bunch that branch from it. I don’t see what point you’re trying to make, we can debate old mythologies but Atlantis is literally incapable of being properly debated because there’s very little history and very much a bunch of new stuff people have taken it. I have heard so many atlantis ideas in the new age community that none of them align with each other besides “advanced technology”

The point you’ve been making all along is to trust the “proper” mythology, and when I bring up the idea of Atlantis being contradicted by new conceptions, you say it’s a weak point somehow and that I’m just reaching out there.

So, Atlantis not having a lot of information is irrelevant when there is a historical basis for the idea of Plato taking stories from tradition and changing them.

Again, if Atlantis existed as part of a older set of traditions, should we throw out the entirety of all the new age or other spiritual takes on it if it contradicts any account whatsoever of Atlantis from any old story?

Even if we just take the body of works on Atlantis in the modern era, do we just throw out everything if the dirty New Agers contradict each other and write them all off as loonies?

Or, do we recognize that even a contradictory account of stories around the same theme can form the basis for mythological discussion? I don’t think mythology was the same thing even for the same groups of people, and the idea of contradictory gnosis somehow invalidating their own mythology doesn’t make sense.

Wrong the point I was making is if you’re going to claim she meant something different when talking about ragnorak then she wouldn’t mention Odin, in which case you or another were claiming “maybe she meant something else by saying ragnorak” which is just reaching with some desire to trust it entirely.

So again, not sure what point you’re trying to flex, but I’ll play along regardless. Norse mythology doesn’t have 1001 meanings to ragnorak, atlantis has many upon many with no real connections and given again atlantis isn’t a mythology and only calling it a mythology for discussion sake.

You can believe atlantis all you desire, but it’s still not the same case as this situation it’s just an attempt to force a point into a topic that doesn’t hold the same concept.

You can’t take Ragnorak and change and twist it to suit your own idea of it, and as you can see she’s the only one that does that, I’m going to question it 100% everyone that dips into Norse culture and their faith will interpret ragnorak as literal of metaphorical but there’s no mention of a 3rd world, no mention of a Odin reclaiming power, so there’s one thing to have an alternative of it but another to take it and deconstruct it to a point you think it has a whole different meaning.

Personal gnosis has it’s limitations. There is a reason why I steer clear of things that I can’t verify either through application or research. Exhibit A, this thread.

I usually try and verify my personal gnosis through SPG and/or research. So I can agree there.

contradictory gnosis is why many people believe spirits are not objectively real. so instead of steering clear from it like faustus, they say it is all part of the mind.

they say it is all part of the mind.

Spirits can only communicate using concepts that already exist in your head. It’s otherwise like trying to explain quantum physics to a toddler. In other words, we are limited in what we are capable of receiving. And some are more limited than others

@Faustus Hence thats why personal gnosis is limited as well?

It is. I have gotten stuff that I couldn’t make head nor tails of until much later. Certain other things had to be understood first.

Okay there are flags on this but I’m going to reply on topic, sort of magician hat on more than mod hat, as I hope that may smooth the confusion out better:

Excuse me but who wrote this simply dont know that many of gods simply wont come back after Ragnarok, and its a simple fact of this mythology.

Everyone thinks they’re quoting uncomplicated lore handed down through millenia, but there’s actually considerable room for doubt, this is something I posted a while ago on here:

Reply on a Quora page “What happens after Ragnarök?”:

The already given answers are good, but I’d like to add something. There is an eddic poem, alternate titled either “Korpsgaldr Odhinns” or “Hrafngaldr Odhinns.” This piece talks about some of the events immediately after Ragnarok, in particular speaking of a quest to ascertain the state of what is left of the multiverse, and determine how to proceed with rebuilding. Heimdall, Bragi, and (!) Loki are said to embark on this journey. (Which is contradiction to the commonly held idea that Heimdall and Loki will fight and co-annihilate during the battle.) Upon their return, Loki will speak with the Asynjur (Goddesses), Bragi with the Gods, and Heimdall with the still-barely-conscious recovered head of Odhinn. It ends on a mystery; and the source of the poem (which is one of the most difficult to read and study) is unknown.

This is not widely known.

The rest of the replies on that link are also worth reading if you have time.

I discussed the likely reason this crap crept into our mythology here: Abrahamic mindset

By that logic lady eva is just as Crazy as her because she claims to have killed God what other people still interact with him.

I don’t think she said she “killed” the Abrahamic god. She just won a fight against him.

Okay I was there so allow me to describe it: I worked with a group, we destroyed the parasitic troll entity, and then other spirits set up currents and forces, to slowly ease people away from freely giving away their own power.

There was some kind of lock on the Sun as well, still not sure what that was about except, again, the same imagery showed up for several people, unprompted. As close to Verified Personal Gnoses as it’s probably possible to get.

Now, I don’t go round banging onto people’s threads if they’re Christian, Jewish or Muslim saying “Nyah nyah I killed your god” (not least because those people still have the same connection to Source, so really all we did was destroy the thing leeching from them) but I will clarify what happened, when the topic is raised.

The thing was feeding from people externalising the Source/self interface and it took considerable amounts of work and planning to accomplish, and I repeat, it wasn’t just me, nor was the thing we destroyed Source, which is what people mostly mean by “God.”

With respect, it’s unrealistic to think that people will just have their minds wiped and stop calling on an entity just because it’s dead, but that spirits CAN be erased is clearly attested to in various other lore, including the idea that various gods killed primordial beings to pave the way for mankind, and that Ganesha was beheaded, or Osiris murdered, and required intense magickal work by other gods who loved them - a new elephant head, and bandages etc.

None of these things would have been necessary if gods were just gaming-like respawns, popping back up the moment someone thinks of their name (which I have found to be an unrealistically anthropocentric idea).

So neither killing gods, nor that they’re known about afterwards, are mysterious and implausible things, these are ideas which go back a very long way.

We “don’t get you” because you’re a narcissist that keeps spewing fan fiction.

This is her Journal, she’s not going round telling people to do ridiculous or dangerous things just because of her experience of the world being ended already, or whatever. You could mute it or put her on Ignore if she bothers you that much, but this post isn’t breaking any rules that I can see.

Unverified Personal Gnoses cannot ever become verified (or be discussed, debated, and contextualised) so long as people are too afraid to stray from “The Mighty One True Lore”…

There are many psychonauts and mystics talking about this world being a hologram (which arguably implies there may have been a more real version at some point), so I don’t see why @Purple’s words are any less valid than those of the Christian individuals who gave us the approved lore about “All your gods are mortals, worship the one true ‘God’” and so on.

You say Ragnarok is a known and done deal, I provide evidence otherwise, and if you search for the phrase reality tunnel on here you’ll find many explanations from one point of view.

Whether @Purple is fan-ficcing Odin, and this will end up with him banging her in Valhalla, is yet to be seen. but the idea that the world already ended and that we’re suffering collective trauma, and the results of a diminished consciousness and culture, is an idea touched upon by the Mayan concept of the world being periodically destroyed, the “New Avatar” work of Geof Gray-Cobb, the Flood myths found globally, and even the “Adam & Eve” document from the CIA library:

It’s a known concept, nothing worth flaming over, and maybe if enough people can describe their perceptions of what happened, we may be able to figure it out - and prevent a cataclysm like it from happening in future. 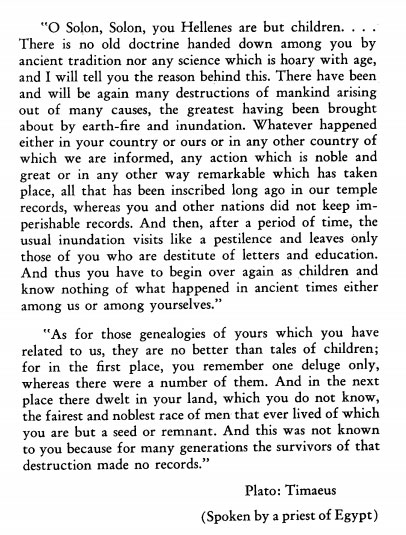 Bragi with the Gods, and Heimdall with the still-barely-conscious recovered head of Odhinn.

I will finish rest of it lol.

Joke aside, nice piece of info madam, I am corrected

There’s ALWAYS more to know my friend, that’s something you either stay open to, or it’ll hit you like a 2 x 4 in the face!

To everyone on this thread. I usually wait awhile before sharing any information that I download. Work through it, meditate on it, and feel what could be of use to anyone.

This is almost 100% rare way it came in. I was trying something new. I am trying to expand myself.

It’s taken me along time to learn how to properly handle this stuff. I thought I give a small glimpse into what I go through on a daily basis.

Fun, this plays nicely with my own “UPG”. Without reading the totality of the thread I’d say, maybe the original earth is not dead but surely it has been usurped in a certain manner. Cut off from it’s original energies and ruled by someone or something else.

Keep the old ways strong. We are still out there.

I must had hit a nerve on this point look at the numbers. 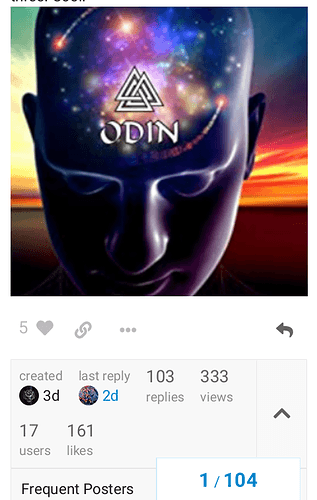 Skoll is the name of the wolf, who follows the shining priest into the desolate forest.
The other is hati, son of hroovitner, who chases the bright bride of the sky!

Odin hung himself for nine long nights wounded by the spear from the windy tree yggdrasil, exposed to the elements. After forsaking his eye to Mimir’s well to obtain wisdom, the same well of the norns! Past, present, future. Without the 3 of them consenting he would of never been able to drink from Mimir’s well…

I will be truthful with you all if there ever is a mass Ragnarok! I know were my loyalties are! Lol
I will tell you all! As I feel sense it! Ragnarok is a war on every level of being…it’s hard for me to describe…so I will just describe it, write by what I know. Just ask.x