So I finished reading the Black Pullet.
I was wondering if anyone has worked with any of the talismans and rings? Also, if so did you have any success?

Which ones are you trying? If you dont mind sharing?
There are a few I want to try.

3, 5, and 21 for now. I’m also looking into combining some of the abramelin magic squares with the black pullet ones with a few other things to see what the effect is. Nothing has blown up in my face so far. So we will see. =)

3, 5, and 21 for now. I’m also looking into combining some of the abramelin magic squares with the black pullet ones with a few other things to see what the effect is. Nothing has blown up in my face so far. So we will see. =)

Good ones!!
I thought on trying 5 just to start and see but 10 would be awesome to pull off

Please let me know how it goes!!
Also you are using the talismans as sigils? Your having success without all the fluff of the satin and ring?
Azazel says you can do it without all that. Kinda like I think you are doing it.

I don’t have worked from the grimoire itself. . But I have used the name of spirits of seduction from black pullet - nades, suradis maninder with great success. … I guess I have shared about it on BALG before

Yes. As ever Azazel is right. drawing them out on paper works just as well. All the fluff is a waste of time and resources, keeping it simple works the best. For me anyway. =)

Yes. As ever Azazel is right. drawing them out on paper works just as well. All the fluff is a waste of time and resources, keeping it simple works the best. For me anyway. =)

Yea me too!!
Please do keep me posted. I’ll share my experiences too!
Also adhi69, very cool! Thanks for sharing!

I like all the old grimoire such as the Goetia, grimoire of honorius, the grand grimoire or Red dragon, and more. Where my problem comes in is that they all view the divine as something outside one’s self. It’s also very Christian and the feel is very much of the times when it was written. When you know that jesus or Lucifer is the god within the true divine light of consciousness and is externalized in these operations for the purpose of tricking the subconscious into producing an physical effect that the conscious mind can be aware of and observe through the evokation.

As for the talismans and rings they are a programmed cue to the subconscious mind to inactivity the ability in question. The ring does not give you the power to know the thoughts and intentions of others that power is within you. The ring just works as a trigger for the subconscious to bring that power out of you. I personally enjoy the aesthetics of these older Renaissance systems. The fact of the matter is that most of us grow up being raised in Christianity and so therefore it strikes a chord with the subconscious mind and the belief system imbedded withing. Of course many of these old works claiming to originate from king Solomon is truly not possible unless the Christian elements were added later, considering that jesus didn’t come around for a couple thousand more years after the death of Solomon.

Jews are big genealogy keepers and I’m supposedly descended from king Solomon according to my family, yet I’m not 100% convinced that he or jesus for that matter were even real characters and not just mythological heroes. The entire Hebrew religion is a monothieised amalgamation of older religions of the middle East such as Sumerian babylonian, Phoenician, Cannanite, Ammorite, and more. The genealogy of Adam in the Torah seem to me to be more of a metaphorical description of cultures. Where Cain and able were not two men but neighboring tribes and the one wiped the other out and went on to become the Cannanite tribe. Then we havethe very obvious sons of Abraham going off to become the Jews and Arabs.

There’s no proof of the movement of these individuals but there are archeological records of groups of people making these movements across the lands of the middle East. Archeological research has shown that the people who later became the Hebrew Jewish people in Egypt settled in Egypt for a time then left. But there have been many such cultures that moved through Egypt in this way and Don’t forget that Egypt was once conquered by the Hittites and even ruled by them for a time… Technicolor dreamcoat anyone? So the stories of the Bible are far more a rough history of cultures than an actual account of an individual. We move on into the new testament and we see jesus as the representation of the Essene and John the Baptist the zadokite. The time slot is spot on between 200 BC and 100 AD the supposed lifetime of Jesus. We can broaden our experience of the divine if we can get past the whole who’s right and who’s not narrative often seen in these biblical accounts of diluted history and alagorical mythology. Never forget that the divine light of Lucifer is indeed with you from the get go and any system of magickal practice is a brain hacking program.

Did you have success?

I will let you know when the victim died. As of now he’s not looking that good so that might not be to long from now.

A few days ago so we will see how it goes. I was even able to make the ring. A little modified though.

Would you two recommend this book? Also are there talismans of protection in there?

Would you two recommend this book? Also are there talismans of protection in there?

I would recommend it. Just because its cool lol.
This is my first actual work from it though. So Charles9 maybe be more helpful.

There is a book called black spells of fire spirits by Carl Nagel.

It gives a easy, workable method to work with the black pullet.

You may check it out.

It gives a easy, workable method to work with the black pullet.

You may check it out.[/quote]
Cool! Thanks for the tip!

Haha!! I found the golden eggs!!

So many eggs and so few quarters!! The humorous side of magick!

on a more serious note i was working with the golden egg
i never could figure. out why Azazel would show me…a vision of me laying golden eggs then during my birthday week the week of may first…i saw the golden egg then a baby.
so i did research.
i did discover the golden egg and women do “lay” them during ovulation.

hope this doesn’t gross anyone out but i have a link as well.
also i cant wait to do more work from this book.
heres the evidence 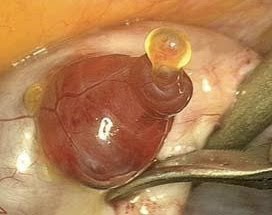 By Danelle Frisbie © 2008 The photos you are viewing here are history in the making – literally! Captured by Dr. Jacques Donnez for the...

God we are so mindbogingly complex! Golden eggs and all. wow!

yes my mind was blown on that one. it was during a time that i was seeing like a million things at once and i needed a break to sort it all out. sometimes we get overloaded with so much at once that it literally blows our minds. this was amazing though!