(Tarot) What’s the meaning of this?

I asked what does she feels about me right now. And this came out 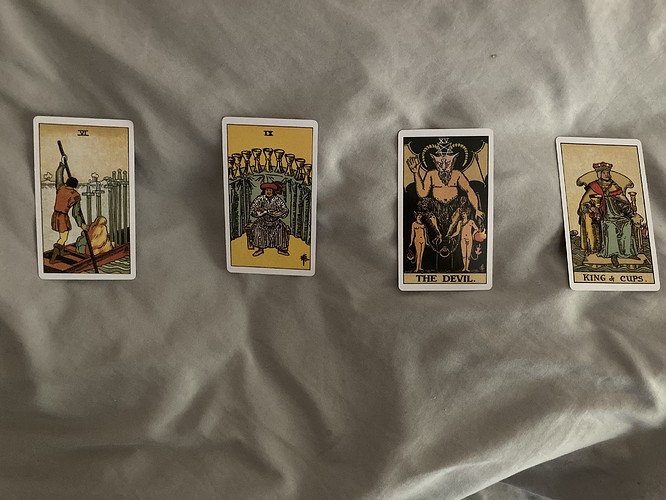 And I clarified each cards and these came out!!

What does she feels about me? I’m confused on these

And should I be worried about these negative cards?

Okay … first off, can you explain the four card spread to me? That will help me put it into perspective.
Nice btw, Rider-Waite is my favorite deck, even though DuQuettes Ceremonial Magic deck and the Wizards Deck were also nice.
Also, astrological signs of each of you?

Six of Swords, if you look at the cards, this one indicates a journey or trip, possibly an escape as the Swords are not the nicest cards to fall in a spread, as many of them are anxiety causing at times.

Nine of Cups, a man satisfied with a trophy case array of cups behind, and its clear he is the owner of it. Six qaballistically falls into Tiphareth, yet swords are the world of yetzirah I believe. So this could be a parental figure, a boss, a teacher, etc. Nine qaballistically falls into the sphere of Luna or Yesod. Air quality as opposed to water such as the Moon card. Can indicate thought, ideas, etc.

The Devil and Death throw a lot of people. Scorpio is Death, Capricorn the Devil. Why death is Scorpio? Scorpio is ruled by Pluto (or Mars), a planet of transformation and change. Why Capricorn is the Devil? Look at the card. Two people chained and exposed. A horrible creature towers over them. Yet if the two think to bend forward, those chains around their neck will fall off. Capricorns are responsible, ambitious, and sometimes obcessed with materiality.

Now for the indicators …
A reversed card can relay opposite meaning of a card, or indicate that is is afflicted, or in other words, the card in question may be surrounded by cards that dont support the card in question. So, lets look at the King of Cups.
Notice he looks to the right, is well dressed, and distracted by something. This court card is Fire of Water, as Cups are a water suit, and Kings associated with fire, as opposed to queens that are associated with water, knights air, pages pentacles/earth.

The journeys aspects are the Wheel of Fortune and the Ace of Wands. A new project and a new opportunity of change are the basis for the journey.

Hanged Man reversed indicates an unwillingness to sacrifice. Two of Wands or Three of wands (not sure what that card is, but he appears to be waiting for a message. Might you be that nine of cups?

Devil is aspected by R Star, The World, and Knight of Cups. Remember knights are air, and associated with Tiphareth as well as Sixes of a suit. The Knight of Cups bear an invitation or message of some kind. The World is completion. Star reversed indicates a lack of social consciousness (Star is Aquarius) or a lack of senses outside the tactile world we all know.

Finally, the Ten of Wands is carrying a burden or is oppressed. Three os Swords, well, we all know it is heartbreak and sorrow.

My thought is maybe you have competition.

So she being a Caprocorn and you Scorpio, well, change is natural for you, maybe not so much for her, even though Capricorns are somewhat graceful in that dilemma.

My thought is maybe you have competition.

This means there’s another guy?

and What does she feels about me through the cards

Thats just my interpretation, that there could be competition. There isnt necessarily another guy, but something drew the three of swords. I was simply thinking that she had a job offer and had to leave abruptly for the opportunity. Competition would be then a natural by product. For lack of better words.

Capricorns are responsible, ambitious, and sometimes obcessed with materiality.

@Fuego Thanks a lot says the materially obsessed Capricorn. Jk

Anyhow your reAd looks for jsensei great to me

@jsensei, I can offer an interpretation from the books I have on tarot, but I feel that maybe a redo of the reading might help. Obviously if the same cards are drawn, then those are the ones to really look into.

Often I transform one strucre of a reading draw to another system, such as Split Hexagram Spread → Celtic Cross for example, as it is only three more cards drawn. When I redo a reading, I try to center myself, and put myself back into the state of mind from the first reading. Sometimes the original cards pop back up.
Again, those are the cards to concentrate on.

Are you new to tarot? If so, starting out with a smaller spread might help until you get a better feel for the cards. I’m not too familiar with the raider decks; I have the miss cleo cards lol. But generally the interpretations are similar across all decks. I am not that proficient in tarot myself, but I am practicing and getting better. I think I can intepret the four cards you pulled initially, but the spread after may be a bit more difficult. That is, if you still want more perspectives on this.

Bear in mind, I’m an amateur but to me it looks like she’s going to move on and find her own happiness elsewhere.

You will walk away in sadness.

I see the left cards as hers, and the right cards as yours.

The world indicates the end of a cycle, and the knight and the king of cups (that both of them are cups is very telling) both face away from her cards knight leading to the king.

Under the king three of swords and nine of wands together indicate a heavy sadness because of the way things will have developed.

Under her cards you have wheel of fortune and ace of wands. A new devolopment and renewed passion and fir as the card above indicates leaving and a journey.

The reversed hanged man and three of wands shows she tired of waiting and has made up her mind to pursue her happiness.

That’s my takeaway from the cards at any rate.

I also have to say that maybe person-to-person communication with her might stall that parting though. Do you have a way to contact her by ordinary means, if so, I would have a heart to heart convo with her, and tell her how you feel about her. Although, maybe thats a possible factor into our interpretations.

she’s going to move on and find her own happiness elsewhere.

I will kill that other happiness. Once I find out who he is. I will curse that guy.

@jsensei I edited your post. Please do not talk about committing acts of violence, even in jest. Any such comments will automatically be removed.

Too many cards complicate things…
This is how I would read it without the clarification!

I asked what does she feels about me right now. And this came out

Straight forward question about “feelings” not actions! And now not future and past!

the 6 of Swords is sign that they are moving in the right direction. That’s not to say that they’re head over heels in love with you just yet but it looks like they are heading that way. Their feelings are evolving.

the 9 of Cups means that they feel the way you want them to feel. Their desire for you is strong enough that you can have them eating out of your hand! If you play your cards right, you will have your lover right where you want them.

The Devil is a bad omen. This card means that they have intentions which you do not desire. For example, they know they can manipulate your emotions and use your feelings to their advantage. Their attraction to you is also purely physical. In relationships, they’re out for themselves.

the King of Cups mean that your lover is very in-tune with your feelings, wants, and needs. They are empathetic and make a conscious effort to see where you are coming from - positive traits for a successful partnership.

Love the other interpretations!

Once I find out who he is. I will curse that guy.

I never said anything about another guy.

In fact my intuition is she’s gonna find greener better pastures somewhere, be it job opportunity or what have you and this may even facilitate a physical moving away as she pursues a perhaps different life.

Your strong reaction kind of reinforces how the devil card (to me) seems to indicate this is an unhealthy attachment on your end.

Again, this is just my interpretation, and what my intuition told me when I looked at it.

I have to say here as well to the OP:
I am a Libra Sun, Leo Moon, and Scorpio Ascendant (Rising sign).

I can be very moody, posessive and nasty at times.
This is my Scorpio-Leo dynamic.

At other times I can be a showman of a beutiful home as means are available and I care enough, as the Libra-Leo dynamic.

Finally, I can be Very civil and sensual as my Libra-Scorpio dynamic.

Perhaps ask yourself as a Scorpio, if you are possessive of this woman or any other woman. Ask yourself if you have abandonment issues or separation anxiety. This can fuel the feelings you have.

Finally, ask youself if you love this woman. In life, we win some and we lose some. Just the way it is. If you really love her, you want the best for her, even if it means you arent together but she and some dude love each other. Then let it go and come back to yourself and raise your image and approach.

Or … perhaps try the Shemhamphoresh or Goetia to help you through this process.