I have developed an interest in my own heritage and ancestry. Im slavic so i thought about rediscovering of authentic slavic magick. I have found some sources but it may take some time before i do it. I have a feeling its very powerful. On first glance it seems like a combination of heathenry and african magickal systems. When i skimmed black scriptures i have noticed that they use cernobog who is something like the devil, a primordial darkness in slavic mythology and bellief. I have noticed that old ways still quitly persist between us today in way. You can see it in language and customs, especially in guest right. Its not uncommon for a host to give up his bed and sleep on the couch or even the floor in some countries. What i wanted to ask is if anyone has some experiences in this current or some good source material because its gonna take me some years to rediscover and recreate the system. I also know about slavic native faith but in my experience most of these guys a racist clowns and its just that, a religion.

I know that in Russian cerny is black and bog is god (you’ll have to excuse spelling as I can’t do Cyrillic on this machine), so I’m assuming this may be the case in your language.

Yup and belbog is a white god. Duality. You also have a trinity called triglav which is also the name of the tallest mountain in my country. Triglav i think although im not sure is a 3 classes of gods its not trinity in a way like christianity. You have major gods like svarog, perun, moranna, dazdbog and a lot of minor spirits like ancestors, forrests rivers mountains, fields… house hold spirits who should always be given a bucket of water so they can take a bath and such. Fairies are also common and spirits of animals. The mythology is highly spirit dependant im guessing so is magick. Old slavs would give offerings to their gods enmass. And the richer the man more gods he had in his home because he could feed them. That is why the word in most of slavic languages for someone who is rich is bogat. In litaral translation it would mean that he has a lot of gods in his home.

It is very hard to find sources about slavic magic. Little is know about mitology, old tradition is mostly forgoten because of christianization and slavic tribes have no writing system- all knowledge is from foreign chroniclers, or from folk fairy tales.
If you need practical true knowlege you need to find person called szeptucha, it can be translated as wishperer, the closest translation is witch . And most of them are older women in the countryside.

I know man. The best account is from paul the diankon and he was very anatagonistic towards slavs. I have found some books allready but they are lacking. I think that i will have to do my own research with books and spirits themselves. It will probably take years.

If book, i recommend some scientific books, because magical books about slavic magick and mitology is mostly crap. Then- evocation of spirits. If you want play with writings maybe russian sources will be richest.

Yeah thank you. I have found some series of books by some ukrainian phylosopher on kindle. Magick books on slavic system are mostly crap filled with new age stuff. Russia is the only countrx in which tradition persists but im not even close to there. I will read everything i can get my hands on and evoke a few gods. Svarog will probably teach me. Old witches are almost none existant now. Maybe in bosnia i can find one of them in the serbian part of the country. But rest assured tradition still lives its just hidden and obscured. Even my catholic devout grandmother would do divinations with coffe

About teaching of magick i thing Weles will be best. And he is a God of afterlife and wealth, so he is quite universal.

Unfortunately, christianity forced it. But more and more people are reminded about their roots.

My people were first to be forced into conversion and even with us the old ways have not been completely forgotten.

I know that from Balkans comes a lot of reconstruction of Slavic mythology.

Yes in southern countries like bosnia and serbia there is a whole undercurrent.

Cernobog is getting a little bit of a comeback. I don’t know if you care for the comic and the show based off of it called “American Gods”, but Cernobog is depicted in an episode of it, and is played by Peter Stormare. He was staying in Chicago with the sisters that watch Ursa Major to make sure the Great Bear doesn’t escape. It’s a good show in my opinion, old gods like Odin teaming up to do battle against the new gods like Media over the attention, prayers, and belief of us mortals. They just need to hurry up with season 2.

@Jake have you ever spoken with Svarog before?

I have never worked with the gods of my ancestors. I never worked with any gods. In my childhood at first my devotion went to greek gods later to slavic and also celtic and germanic since i have germanic ancestry as do most people in my country.

He is a difficult deity to find information on. Unlike any entity I’ve ever tried to research before I cannot find any stories about him or accounts of personal experiences with him from people. I’m planning on talking to him at some point when I’m not swamped with homework or have a baby attached to my breast ( might be a week or two before that happens ) so the lack of information is frustrating.

Slavic history and mythology is kinda like that germaniand and christians fucked everithing up. Plus most of the tribes were illiterate. He is kinda like thor i think. Thunder and such. Maybe also fire but that is more svarozich domain.

From what I’ve gathered he is the God of Cosmic Flame, so holding dominion over all fire in the sky, and the primary god of the Sun is his son. And yes he has a hammer like Thor but his is for blacksmithing versus Thor’s is an instrument of battle. And that’s literally all I’ve found. 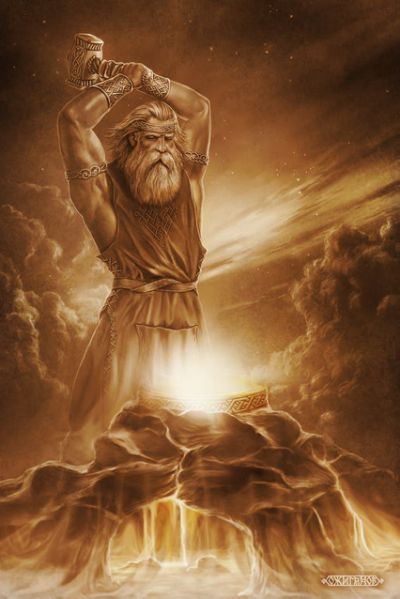