So I’ve seen some topics on this matter before, a discussion on whether any of them are the same being, however nearly half the posts regarding it were by HP Hooded Cobra (Who needs to sit down and check his ego).

So I figured I’d start my own and get some authentic answers from a community who doesn’t need a nazi’s ego ruining it for everyone. (I’m sorry, I am a little salty over it)

From my own experience, Satan is more a title than the name of a being. I have summoned using this sigil

and talked with someone who called himself Lucifer. I asked if he went by Enki or Ea as well, he said yes. I asked if I could call him Enki as when I think of the name Lucifer I see Mark Pellegrino (Supernatural’s Lucifer actor) he said that would be fine to call him that as well. (I am hesitant to use Enki as his name on these forums, seems the universal name has been set as Lucifer and I don’t want to cause any confusion!) When I asked if he ever went by the name Satan, he seemed agitated, like he was pissed off at old memories. He said Satan was a title, but it’s been changed to forever mean “evil”. He promptly left after this, and I can only assume he’s angry over how society now uses the name Satan as “The Devil”.

I have never summoned anyone using this sigil: 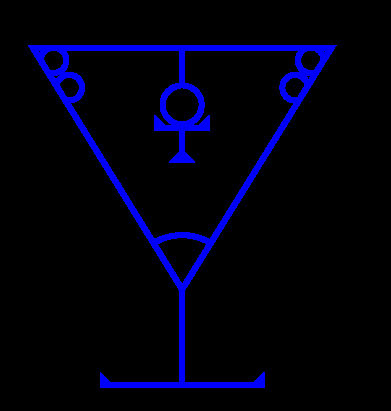 But I would like to try just for curiosities sake. Has anyone ever tried using this symbol? How was your experience and was it the same “Lucifer/Enki”?

While I appreciate your UPG and sharing your contact. Personally, I don’t believe that there is much connection between Ea/Enki, Lucifer, and Satan. Firstly, Lucifer isn’t associated with Satan. Lucifer is a Roman God of Venus, the Morning Star. In the Bible, Lucifer translation of Helel, which means morning star (Venus) and is a poetic description of the King of Babylon.

Secondly, Enki/Ea are actually associated with Mercury’s star, not Venus’.

Thirdly, Satan is the common name of the Archangel Samael in Judaism, because Judaism doesn’t believe that Satan is evil, he’s exactly what his name means, he’s the accuser. In the court of heaven, he’s the opposition attorney, making sure that all the evidence is shown. Satan being the leader of the fallen angels is a Christian invention.

I agree with @StewardofSophia (btw; welcome back, good to see and reading you )

A simple research will reveal that the Lucifer of the Bible was derived from a single word in Isiah 14:12. written in Hebrew that word is “Heylel”. When that was translated into Latin, it came out as ‘Lucifer,’ which in reality is not a name. It means ‘morning star,’ and in modern Bibles, translators know this, and use ‘morning star’ instead of ‘lucifer’ to avoid confusion.

In popular culture and society, it is widely believed that Lucifer is the Devil, the Antichrist, or Satan. This is because, over many centuries, Christian tradition took that Latin word ‘lucifer’ and through superstition, twisted it into the name Lucifer and then made that name synonymous with the Devil.

However ,in the Bible itself, the word ‘lucifer’ describes a morning star; ametaphor for a King of Babylon. The word has nothing to do with fallen angels or demons. It is clear that Lucifer was known as a demon, a pagan god, and many other forms of spirit, in many cultures long before the Bible was written.

I can also verify the Lucifer/E.A./Enki connection, and if you reject it because Enki is not associated with Venus, I’d say stop viewing the spirits as one-dimensional. Non of you is only venusian, mercurian and so on, same goes for the spirits.

After studying ancient sumerian history from translators of the language such as Zechariah Sitchin, I believe Enki to be a different type of otherworldly being all together. I have not determined if he wants humankind to ascend/evolve or just views us as his lab rats. However, Ishtar, who is Astoroth was of the same blood line as Enki. If you choose to invoke him I would use his Sumerian sigil from H.P. Lovecraft.

From what I’ve experienced yes, Lucifer is Enki/Ea. Whatever you call him/her I’ve learned not to limit my perception of who or what he/she is or isn’t. That one makes my head spin and never stops surprising me. Lucifer, and most spirits really are more complex than most people are comfortable with. You can’t just put them in a little box because it’s easier to digest. Just like people they are constantly growing and evolving, and defining them in only a handful of ways becomes an impossible task.

One constant observation I have though, is that the ones who choose to make themselves most known, tend to have the heaviest hands in humanity. For whatever reason they WANT to interact with us and mentor those who desire to learn. There are plenty of terrifyingly powerful spirits who are at best indifferent to humanity and are happy to go about their business without us.

What I find funny is the human trait of believing the rest of sentient existence centers everything around us to the same degree that we do.

Enki is Lucifer in my book and it makes me feel amazing working with him!

I am merged with one of them…so…yeah.

He comes to the Lucifer sigil or the Sumerian writing of his name.

There’s a few sigils of him which one are you referring to and what is the Sumerian writing of his name? Also have you used his enn before? Thanks.

You can find the name Enki in Sumerian by Googling it.
I dont have an image handy for you.

But Id never use the image from Lovecraft. Hes an amazing author…love his stuff…but Im not mixing fantasy with my craft.

Sorry about the image. Id post it if I had it available.

Just a word of warning…JOS lists Anu’s Sumerian name for that of Azazel. hehe.

Interesting. I’ll have to delve into this more. Some say Enki is actually Thoth the Atlantean, author of the emerald tablets. Good to know, tbanks.

The Sumerian God Attar is closer to Lucifer than Enki/Ea is.

I have a healthy distrust of UPGs. You can’t just mush deities together with no rhyme or reason. There has to be a legitimate reason. If I evoked Lucifer tomorrow just to ask him if he was also Enki and he said no, what would you say?

What is the connection between them, beyond UPG.

If I evoked Lucifer tomorrow just to ask him if he was also Enki and he said no, what would you say?

I’d say that you will hear what you want to hear. That’s why we need to empty completely our head and approach gods with open mind. Very open mind. As I said above, Lucifer (and all spirits) are not one dimensional. He’s not only venusian, he’s also mercurian and saturnian. That’s his aspects I have stumbled upon, until now.
If you try to approach everything based on your human logic, it’s a lost game.