So, I’ve been drawn towards working a few different tasks lately. One of those is to make my own runes. I’ve been stewing on it for a while, but finally decided to get to it - and use last year’s Christmas tree. Now, I intended to use this tree to make some wands and practice wood burning techniques, in a Nordic style. Seems I was given a few hints as I kept putting it off, even to my own surprise.

I finally decided to make some runes out of it, as I connect more with my ancestral Gods, and came across this piece when I was hand sawing away at this trunk.

Could be coincidence. Could be more. But it struck me all the same. 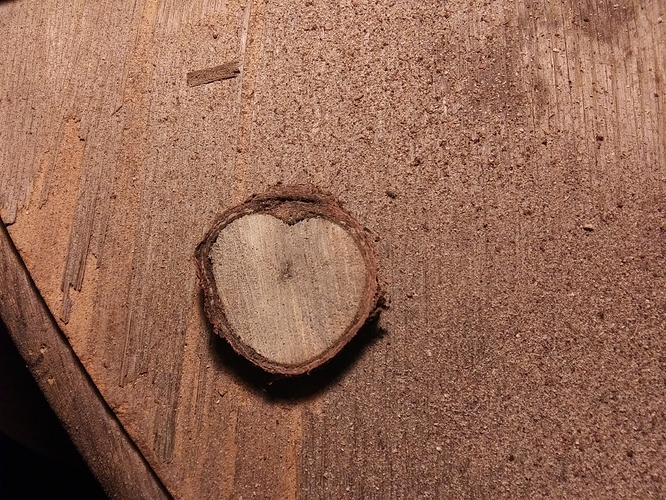 I love it! Definetly more than mere coincidence

No. I’m in the process of (slowly) making them.

As a side note one way you could expand on this energetically would be to vibrate the runes galdr as you are burning it.

If you decide to do this you may wanna do one at a time every few days. Different people have different energetic reactions to them. Some can experiment how they want will little worry other can just lightly focus on them and have the full force of that rune flood their life.

One thread of commonality i have noticed both with the nature of runes, mantra and and various energetic working is as you learn more about them the less of a “cushin” i guess you’d call it you get and the more energy you are exposed to whether it turns out well or not ya learn from it

had more than a few elemental and planetary mixes essentially blow up in my face as it were but that is the cost of experimentation.

That’s a good idea with the vibration. I’ll be sure to do that. I appreciate it.

I have wondered about that recently…

One thread of commonality i have noticed both with the nature of runes, mantra and and various energetic working is as you learn more about them the less of a “cushin” i guess you’d call it you get and the more energy you are exposed to whether it turns out well or not ya learn from it

This has been a common issue for me lately whether working with energies or entities. Sometimes just a curious thinking can bring them in lol

And @norse900 I got some storm birch branches (a tornado went through the mountain pass and demolished a bunch of trees) im gonna make a set of runes with them now lol. Should be some interesting energies. I’m dedicating this set to Odin, Freya, ans Thor

I was planning on using European mountain ash or Luis or rowan (my birth tree) instead but haven’t had any luck just yet with finding it where I live. I’ll find that when its time I suppose.

Right now I’ve got my branches charging on my altar for 9 days before I make them into disks. Then I’ll take 9 days per rune, doing the galdr and the bloodletting slowly. Over the 9 day period I’ll add a little bit of my blood to the runes while galdring and doing the rune pose. Im Taking it slow with the blood cause im a chicken and only do pin pokes.

Awesome! Glad I could inspire

I’ve been working on mine, but the wood is very porous (most wood I’ve seen around here seem to be). Just when I think I’m satisfied with the smoothing process, I wet them to get rid of the dust and realize there’s still a long way to go! I have only used non-powered hand tools with this set, since it’s my first. I’ll have some extra rough blanks that I’ll likely use limited power tools on, just to see what the difference is. Thankfully, I’ve had some extra time, so hand tools only is an option.

I did realize the night before last that I had thanked the land, but not the wights, when we got the tree. I called out to them (a couple showed up) and I apologized and made amends. They seemed to accept what I was doing to the tree and why.

I started thinking about the bloodletting process and realized I only had a few lancets remaining. I’ll have to stock up. I do have a scalpel, but that’ll leave a little more evidence than I care for, with 24 of them. The lancets I use come in packs of 25, iirc, so that works out.

I think the process I’ll use is to consecrate and burn the rune, let the blood, and vibrate the entire time. Despite not being an Odinist or Odinian, I do plan on evoking Odin and asking his opinion on invoking him during the process.

I got some storm birch branches

I saw in previous posts that you like Freyja Norling. She would approve

galdring and doing the rune pose

Did you mean prose/poem? I found that not all of the (Elder Futhark) runes have a poem/prose to go with them, but that may just mean I need to dig a little more.

and doing the rune pose

The practice of rune yoga has changed my life, my favorite is Gibor

Interesting. I’m assuming that these are a relatively recent thing?

I don’t know, but it’s a cool practice. Other cool ones are man and yr 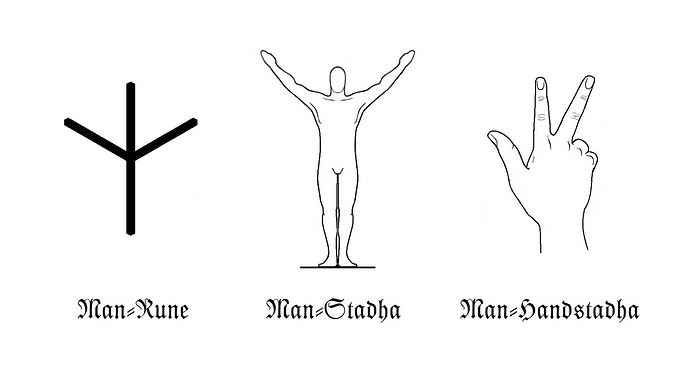 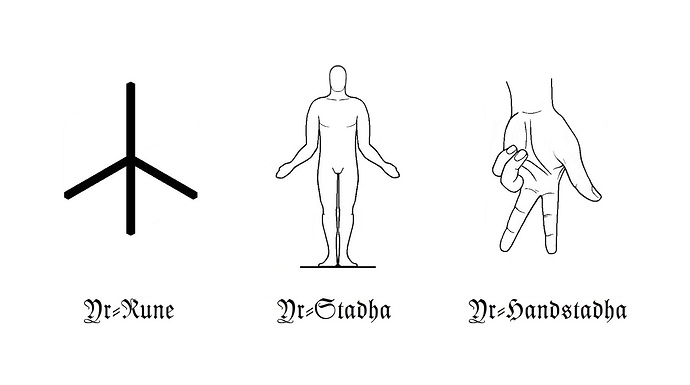 The hand positions remind me of shing-i (only name I know it as), which was a practice my old Tai Chi/Qigong Sifu used to have us do.

The only controversial runes I know are the Armanen 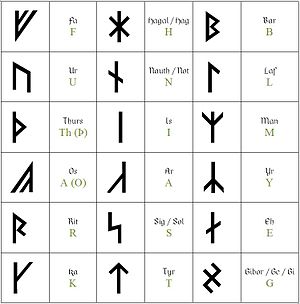 Was it one of these runes?

I dunno about that version but if you dig into the elder futhark there are some connections to various asanas and mudras from the older vedic traditions that bubble up.

I find when i am performing a rune breath mediation my hands tend to drift into seemingly random mudras that i find out more about later.
Has been an interesting experience.
I use the term “rune breath” as a form i adapted from one form of the HUUL meditation presented by Michael Denny the thunderwizard. Very potent stuff.

Something similar happened to me with some postures that felt right done in another way. Freya and Vine, if I remember correctly, showed me a way of doing the thurs posture that I haven’t found online nor in books

Sorry for the delay. It was driving me crazy and my internet history wasn’t being helpful. I knew it was similar to algiz, but that was about it.

Turns out it was the rune Ear. I can’t seem to find the picture I was looking at, though.

It is a good looking rune

Yeah, I like it. I’ll have to dig more into it when I have time. Right now, I’m still drinking from the firehose 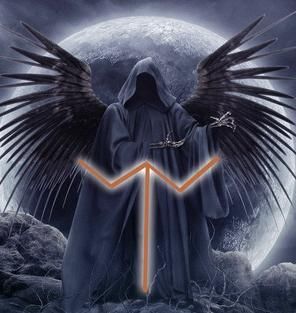 There is even this edgy picture of it.
I used to follow a youtuber whose patron goddess was Hel, and she communicated with her using a set of runes, she never spoke about the ear rune being linked to Hel, though. Someone more versed in history could correct me if I’m wrong, but I think that this is one of the runes created to write English sounds

Apparently, it comes from the Anglo set and was found on a single item. I can’t look at it without thinking of a shrug, though…

Man, those wings look a bit…used…