I’m new to radionics, but not new to energy work. I notice you have some of the equipment I’ve been searching on eBay. You mentioned working with the non electronic wish boxes. I think that would be a good place for me to start. I have questions so pardon my ignorance. As far as the electronics, do they produce their own frequency, or do they have an audio input? As I’ve said, I’m not new to energy work, but I’ve not touched radionics yet. I think I better start kind of slow. I plan on incorporating an actual audio system eventually, and I feel like I better know what the hell I’m doing. Any advice would be so appreciated.

I’ve worked with both the electric and non-electric audio and clip on inputs and out puts. I wouldn’t suggest you hook the output on the electric to yourself as some suggest. However hooking an out-put cable from the non-electric box is a great way to tune the box to you.

As far as input cables, they’re great for both audio and energy transfer for your spell. I would say this is fine on both electric and non-electric.

The Scalar Wave Comunicator does indeed have a booklet on the frequencies it produces and what switches it takes to get into whichever mode you desire. I wouldn’t suggest hooking yourself up to more than one machine at a time. No electrical problems, but the energy itself is overwhelming and meant to be used sparingly because it indeed works so well.

I know Filip has some items on ebay but definitely check out his etsy bc you can find things there he doesn’t list on eBay. Hope this helps. Any questions are welcome, ofc. I’m just a “mad scientist” in my lab over here

I’m kind of the mad scientist too. Been collecting tesla coils, theramins, you name it. I just don’t want to blow my house up.

These boxes are very intriguing. Quite pricey though.

Would this cheaper one do the job for enhancing meditation and manifestation?

​MASTER 8HZ FREQUENCY GENERATOR TACHYON AND SCALAR ENERGY POWERED Shamans, remote viewers and super psychics all have one thing in common: they have the ability to access the Gateway Frequency, the frequency responsible for unlocking psychic powers...

Also, what’s the black square/White triangle on your spirit box?

Has anyone tried tools like cybershanman software, does it work?

Have u ever seen “The Last Mimzy”?

At least we’ll go out with a bang

As far as the box decoration, it varies from order to order so it depends on what they are producing at the time. I know it changes often.

But being the nerd I am, I took a year of Latin in university. Dead language or not, it has lots of power I find.

It says: Mindfulness of the future, All things change, nothing perishes, and Forbidden Language.

And kinda off topic, but the fact that the Vatican has the only atm machine in the world in Latin is super interesting to me. Not to mention zero access to the archives…jerks

that sounds like fun because not only have I been mixing since 1988. I found a nice yutube chanel that does tesla coil music… little ones on amazon around $65

lightning strikes around 100,000 times per second, but the switch can be turned on and off at audio frequency

lightning strikes around 100,000 times per second, but the switch can be turned on and off at audio frequency

Very cool. Lovely channel indeed and good info/warning to people that if you don’t know radionics you can hurt yourself.

And since we’re on the subject of expensive equipment… 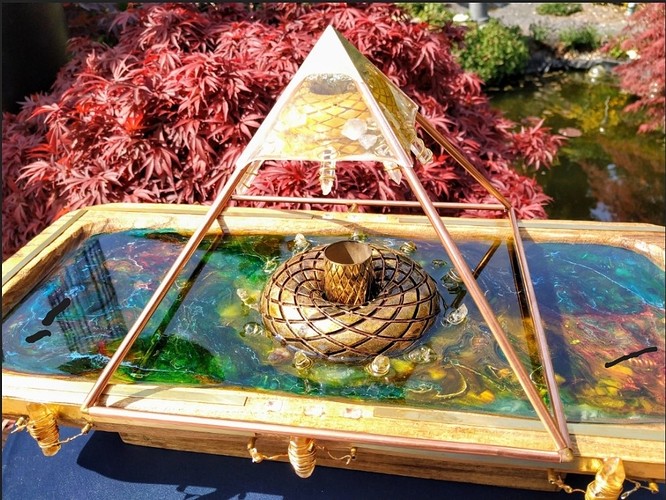 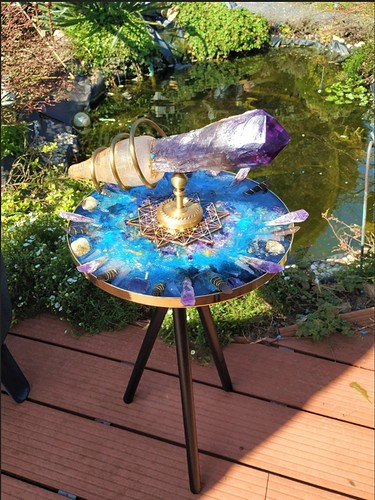 Now if only I had money

…my birthday is soon everyone…lmao

Much to my dismay, my Secular Wave Comunicator has stopped working after only 5 months. For the price, I’m a little bummed out. It was my main piece and very versatile.

The good news is…

I can pop it open and dissect it!

I’m going to try and troubleshoot it with the seller a bit more ofc. But if it’s a lost cause, I’ll definitely keep you posted on the contents when I investigate.

Still wish it would just turn on!!

Ever heard of this?

Élan vital (French pronunciation: ​[elɑ̃ vital]) is a term coined by French philosopher Henri Bergson in his 1907 book Creative Evolution, in which he addresses the question of self-organisation and spontaneous morphogenesis of things in an increasingly complex manner. Élan vital was translated in the English edition as "vital impetus", but is usually translated by his detractors as "vital force". It is a hypothetical explanation for evolution and development of organisms, which Bergson linked c...

Have you study any of Tulsa works? Or read about him?

“Any sufficiently advanced technology is indistinguishable from magic.”

They say real ufos are smooth. That the pilots control everything through their minds alone. Have you seen in v.r. they already have devices you can control it with thought alone.

As anyone done any magic in v.r. in the forum, yet?

Your setup reminds me of Skyrim with making potions and enchanting items.

*excuse all the questions but it’s all related. In my own mind at least. This is what I called a ‘created mess’. This is how I work energetically. Pure chaos, but it’s under my complete control. Pulling in different things to create something new from it.

**I am NOT trying to derail your thread. I am TRYING to find out how all of this work energetically is all.

I think so, but haven’t dove in super deep. I know its basically that the materialistic world views are not sufficient to account for some (but not all) mental or cosmic phenomenon? So a purely physical explanations will always fail so one must use properties that are irreducible such as the mental and physical. They aren’t irreducible, bc if the mental was reducable to the physical then it would be considered “reductive physicilism.” So it comes down to the fact that It’s not sufficient to describe certain objects processes mearly in terms of physical properties because they often have experimental processes that are required to understand said full function?

Word vomit😆hope it made sense. I need to look more into it for sure but I have touched upon it in the past.

Also it’s crazy you mentioned VR magick, because as soon as I got my VR and used that daily, I was astral projecting within months successfully and almost nightly. It’s DEFINITELY a magick/techno device that really launched me into my astral double life and magickal endeavors. I think VR think is definitely a glimpse into your own little dimension pocket in the universe. And that’s a little terrifying because if you think about the it’s about simulation and simulacca and the matrix…well we could very well be simulations too…but I digress. I would consider a VR device a valuable magical tool 100% A great piece of technology to use with magick.

Sorry should have tagged ya in my response ^.^ but I am indeed currently researching Tesla as well🖤

Honestly, Élan vital is just the fancy French way saying will power. I think all stuff like chi or whatever is just each culture saying will, power, or both together. 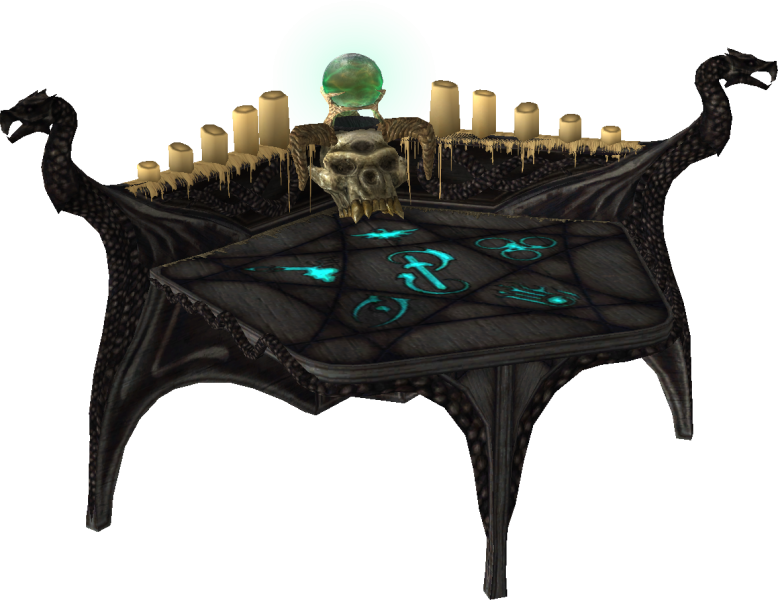 For other uses, see Arcane Enchanter. The Arcane Enchanter is a magical table that allows the Dragonborn to create their own magical items and learn the enhancements from other items by disenchanting them. The Enchanting skill heavily affects the...

I also theorize such devices are truly power by some still unknown will-power out there. Skyrim device perfectly highlights my point.

••••••
Are you OK with starting a new thread about v.r. magic? I don’t want to derail your original topic. I will start one about Telsa too.

Cosmic mind theory I am currently working on. But entirely different thing, but not really. It’s my own HOW magic works. The secret mechanics of it.

*I am looking into everything I can. I appreciate your reply. My mind is beautiful mess. It’s extremely hard me for NOT to go off topic. Or stay on one topic at a time.

**Do you mind if I start other thread to fully give a proper reply to the first part of yours? What you wrote was thought provoking and deep. I need to meditate upon it.

Honestly, Élan vital is just the fancy French way saying will power. I think all stuff like chi or whatever is just each culture saying will, power, or both together.

It’s a whole dang philosophy my dude. Google it up.

And yes that’s a fantastic idea I will definitely start a thread on VR use and how it could propel you magically. I could explain what kind of VR system I have, what programs I use, et cetera. Maybe I could do some screen captures. Because tbh, more often than not, I end up in the games a lot astral traveling.

**Do you mind if I start other thread to fully give a proper reply to the first part of yours? What you wrote was thought provoking and deep. I need to meditate upon it.

I mean, I think starting another thread off of something being talked about in another thread will only be confusing. And since Elan Vital can involve the use of radionics, I think it’s relevant to this topic.

Especially now thinking about the VR maybe what some might call merely technology, but I mean if it’s tapping into frequencies we cant on our own (which it does) then couldn’t it be considered a radionic like device technically speaking. Researching it, it does have electromagnetic radiation at some level. Even if not a radionics device by it’s physical state, I think it can be argued it definitely has radionics properties and uses if that makes any sense.