I’ve spent the better part of the past couple few years diving into the roots of the LHP. The history of the occult. The use of occult theology/philosophy/theosophy in government, science, and our daily lives. I’ve listened to countless hours of lectures and discussions ranging from atheist historians to theistic satanists. Grimoires. Videos. Literature. Qabbalah. De vermis. Satanism. Santeria/voodoo. Hermeticism. Tarot.

So I start picking up these more modern books over the LHP. The Qlippoth. Tree of Death. Azerate. Sitra Achra/Ahra. Black magic. Demonology. Etc… Not feeling it. At all.

Don’t get me wrong. There are a few archetypes/dieties/entities that I have an affinity towards. And the idea of a personal daimon/higher self/HGA rings true. But what I’m picking up in this modern literature are that the authors seem to have no idea what the fuck they are actually talking about. The origins. The roots. The lack of proper ritual, or the lack of any seemingly legitimate ritual or purpose. It all seems so self-serving in a very minuscule, finite package. Like Protestant Christianity. “Gimme gimme”.

Having grown up in Cult-Christianity, this all seems like a carbon-copy. Substitute “the Holy Spirit told me this” with “so and so entirely told me…” I think that type of rhetoric just leads to depression and apathy.

Where is the true, hidden knowledge? What are the real secrets? The tangible experience? Real transmutation? Legitimate interactions?

The only characters that are ringing true are the Lucifer/astaroth/set/etc. Lightbringers. Wisdom makers. It makes sense. On a global esoteric scale. The spiritual evolution coinciding with the physical. True alchemy.

Someone must have something more to give than the future has in store for us. There has to be something else.

I see similar problems. It has come to the lhp basically being the edgelord version of the rhp in too many instances and people instead of putting out truly substantial work try to market to one side or the other whether their work is good or not it gets framed in a setting that I believe is doomed to failure from being too limited and inflexible for the forces truly being dealt with. I find that for me the truest magick is in disregarding the lhp and rhp but instead blending them together as needed to accomplish further advancement. In practice it my methods draw heavily from Hermetics and Chaos magick and many other sources and exploring those powers from the point I am comfortable with not worrying if it would be seen as one path or the other. The issue with so much stuff today is that it is too polarized to a single side and doesn’t capture or express the connection the self has with the universe as a whole but also as an individual and it just creates a schism that pits them against each other instead of trying to unify them into something more whole and workable.

You spoke of polarization. That’s a Masonic/Templar goal. The two pillars. The hidden pillar.

Freemasonry seems to be whispering in everyone’s ears.

Hermeticism truly seems a more structured and older form of Chaos Magick in many ways. Chaos magick does bring quite a few unique things to the table but goes very well with more traditional methods when properly utilized.

As to Freemasonry I would say it has a solid base but has gotten a bit silly in my opinion in how it has chosen to evolve especially with the climates it is most associated with. I just stick to my own alchemy of refinement of the self and cultivation of what is beautiful to the individual and those close to them.

The true secret knowledge is what you discover on your own.

But what exactly is it that you want? Practical real-world results? That’s reported plenty around the forum. Spiritual gnosis? That’s for you to discover.

Work with the beings you resonate with. Use what works and drop what doesn’t. Advance the field with your own exploration. 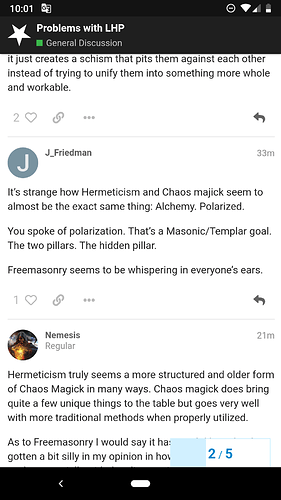 Freemasonry seems to be whispering in everyone’s ears.

Isn’t there a supposed hidden 33rd degree of Freemasonry?

All current western beliefs/mindsets/archetypes/gods/etc honestly seem to be directly related to the original goal of the occultists to infiltrate and restructure. The ultimate social alchemy. Every demon you call on. Every god. Every thought being. Prescribed and manufactured. For everyone. For the satanists. For the witches. For the Christians. Especially for the Protestants and Catholics. Polarize everyone. There is no good or evil. No gender. No one truth. It’s all subjective. Do what thou wilt.

We’ve all been had. I’m starting to realize that I think I know the TRUTH. And it’s depressing and bleak and we are all fucked before we know what fucking is.

We’ve all been had. I’m starting to realize that I think I know the TRUTH. And it’s depressing and bleak and we are all fucked before we know what fucking is.

And the truth is…?

We are everything and nothing at the same time. But as such the possibilities are endless…

“Work with what works for you”… yes experience for oneself and being your own mistress/master yeah.

“the Holy Spirit told me this”

I come from a Christian background which I left behind many many years ago. I grew up in a very religious family, and I was very religious as well. I was going to church every Sunday, some times even daily. I was doing everything a good Christian should do: confession, holy communion, daily praying, I even stayed several days in a monastery. Lets not talk about the side works.

Holy spirit and rest of the gang never said a word to me. Nada. Zero. Not even. I never felt their presence. And no, it’s not that my senses weren’t open, because I could see and hear Entities since I remember myself. Same goes for the rest of my family and some were way more faithful than me (and they still are). No one ever spoke with or heard the holy spirit, Jesus or god himself.

So based on my experience, I don’t even believe that anyone ever heard them. And, honestly, where I come from it’s not even something that happens, as it is in USA for example.
The only guidance I ever received was from ancient Gods and Demons.

I grew up in the evangelical cult-Christianity. Same deal as you. Never heard anything from God/Christ/Holy spirit. Spent years begging for a sign, some kind of confirmation. Relief from the misery. But it’s when I finally realized that I was, in fact, part of a cult, that the search for the other side/truth came to fruition. I was done with being locked in small rooms with people trying to cast out demons. I’m pretty sure those “demons” were just a way for the “God” to reinforce his “goodness” (the traditional Satan in the Bible doing Gods bidding only so God can save people and look glorious).

Interactions with other entities, that I’m pretty sure of. I’ve had enough sleep paralysis/night terrors/etc to last a lifetime. I have been physically affected by “entities” while awake. It was awful and miserable and constant.

But all that seems to be in direct correlation with the archons. That’s what I don’t trust about so many of the religious systems, especially the “being open to everything” aspect of the LHP. It seems extremely unsafe in a metaphysical/esoteric sense. If the archons are the great deceivers, (as above so below kind of shit) and they are unable to maintain physical bodies due to their nature, then it would only make sense that they create this madness but also create the “cure”.

Duality. We live in this spehere of duality that seems completely inescapable.

The reason I bring up “proper ritual” is because it has a place in everything we do as humans. It is “proper ritual” to put toothpaste on your toothbrush in order to get clean teeth, which ultimately leads to a healthy body. It is a “proper ritual” to boil water to make hot tea. You can try going about those things in a different way, but the “proper way” to get the best results is tested and true.

I believe that it is the same way with “spirituality” in general. Formulas. Ritual. A+b=something. But from what I’m studying, it has to be at a nuclear/quantum level.

I know I’m rambling, but I don’t buy the black candles and incense and mystical shit. Generally that’s a cover for a pile of bullshit in the corner.

See I don’t think that’s the case. I think that is the rhetoric that we have been spoon fed due to our proclivity to deny montheism.

Sadly, that thought-pattern stens from deist/occultic monotheists. The AIN SOF is ultimately “God”. The only God. The ultimate source. Mono. One.

I agree our consciousness is the most “infinite” thing we interact with. Quantum physics states that it is separate from us and our electric flesh suits are receivers of this consciousness. That really only reinforces the idea of monotheistic belief. One source. The Big Bang theory honestly reinforces the idea of monotheism more than anything. One source. One point of creation. Everything else is a product of this source.

The transhumanists are saturated with this rhetoric.

Thing is i experienced the singularity to my own satisfaction.i found within that vastness there is space for all the workings we observe… to me there is one “God” - me…, you, azazel. All one … i never thought of it as monotheistic… as i dont worship myself

well., don’t know if I am qualified to comment on this as I am not very familiar with many occult currents in the west, but I think Jason Miller Summarized the problem very well, that ---- Advanced occult doesn’t exist because there is no Market for it right now.

And spirituality and occult will always be SUBJECTIVE to a large extent. The only thing that makes it better than other organized religion is it is an Open structure. If U want U can come and have it. If you want you can leave any time with what ever you attained. If you want you can create something new and contribute to the overall system.

But shouldn’t we able to get past the subjectivity of it all and actually finds truths?

I’ve heard the subjective argument a lot, and while it seems comforting and picturesque, I don’t think that’s the case. Everything has a code, structure, formula. Even at a quantum level. Especially in the material, dualistic world we live in. Cause effect. Balance. Equilibrium. Patterns. Fractal repetitions.

well, it is said that spirituality in the better ages ( as we are now in the dark age ) is almost like science multiplied few thousand times. Both middle path and occult is subjective, I would say the middle path of both theistic God oriented tradition and atheistic middle path like classical Buddhism and jainism are more subjective than occult as there is a practicality in occult, in it’s pursuit of concrete results in the material world. But still is no where near compared to what Science is in terms of understanding how laws of nature - how things work and then exploiting it.

Not to say that a scientist spends his whole life just to find a small part of truth of existence and then shares it to the world so that everyone can benefit from it and get something new out of it also later.

Occult till just few decades ago was completely shrouded in secrecy. Secrecy is still and will be to a certain extent part of occult. SO DON’T THINK IT WILL EVER BE COMPLETELY AN OBJECTIVE SCIENCE. That’s just how it is, sadly.

Everything has a code, structure, formula. Even at a quantum level.

Have you heard of the ‘Double Slit Experiment’?