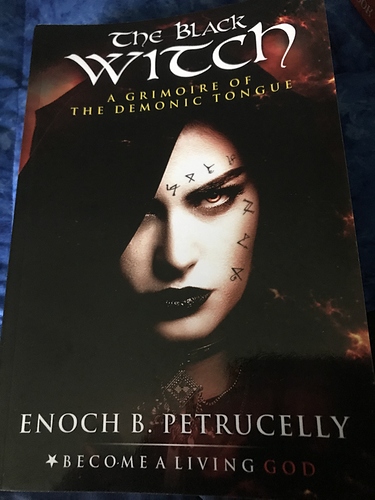 Anything close to a relationship I have with Belial comes more of creativity, attempts to research, interpret, and portray him in my writing. I’d describe it more as admiration from a distance. Like you see a lion and admire his majesty and strength, but you don’t want to get too close cause its still a wild animal. I still go by the mind set of “He is still a demon, so you can’t blindly trust him.” Lucifer is one thing, but Belial is an entirely different entity all together.

Any opinions? Should I go through with it? How should I interpret his response? Has he proven trust worthy to new invokers?

Really, I’m in need of responses. Helpful advice is appreciated.

He later took me to hell too, a little against my consent I gave it but backed out at the last minute.
He had mercy on me and took me back early though, I think? It’s hard to tell, it was um very foggy. lol

I write about a lot of my experiences here

So I have been working with Belial, it has been very interesting to say the least. But he tells me things like I hear Oralee talk about in the new Abaddon videos. Neat huh? Anyways I must digress for a minute and do a summary of my intro because this all ties back to why I came here in the first place I think, hence the saga. I came here to this site after meeting my soul mate. I had his name given to me a week before meeting him and he fit the description and was so mysterious. Said he knew…

I hope I’m not overly spamming this link out, it’s long but I really want people to read it and give me their input, I’m in a bit of a messy situation to say the least.

Anyways I also had a time where Belail and angels fought over possession of me while I was driving. lol -good times. lol

Belial is always proving his trust and ruining it pretty regularly with me. It is a wild experience. lol

I still have a hard time answering that, I don’t protect myself as much as I could and maybe should but I do keep myself fairly really protected with him. You might want to do more. You might want to take it very slow with having him access your body. Once he get’s control, to an extent it’s hard to get back. If I’m not saying his enn he likes to communicate to me by making my heart race or pleasuring my root chakra. Getting back from possession has never been a problem but gaining 100% control over those body parts is still in the works. um yep.

I’m right now watching an E.A Koetting video about Urgent Words Of Warning On Belial - Edgar Kerval. Appearently, I watched half of this before. I suddenly begins with why people are afraid of Belial. They believe they have self destructive habits and worried Belial’s powerful energy will enhance those habits.

The video is now saying Belial destroys your weaker side from within you and brings out your best potential. I mean, yeah I agree. But this is Belial, lord of earthly existence. And we know life isn’t fair. So why should Belial be?

But, isn’t Belial known for helping to get rid of bad habits, he isn’t a Jupitarian entity or Lucifer. I would be more concerned with the aggression.
Honestly, I’m concerned I already have too many of his qualities and that is why my life isn’t the way I would like it to be.

concerned with the aggression

I can’t say much but sometimes the reflections you see of a spirit isn’t always a reflection of themselves but rather a reflection of the practitioner. If you believe that a spirit is a certain way or even more and more people do sometimes that’s the reflection they receive of the spirit. It doesn’t have to be the case. Aggression can sometimes be a manifestation of repressed emotion such as anger lingering with the self. I’ve never worked with Belial extensively but it is said that demons can help you a lot with your inner work such as shadow work and such. They can help you with clearing the junk out from within which is them blessing you! That being said sometimes you have to make a mess before you see a clean environment. Think of deep house spring cleaning everything looks like chaos to begin with but if you stick with it you see the results. So yeah on the outside things can look unpleasant sometimes and feel unsettling! Especially if you’re walking with rage everywhere and you need to do your best to keep grounded then but still let things be and give your inner self the voice.

I don’t know just a thought.

I started doing some work with Belial. I thought it would be “fun” lol. Now, I’ve finding sometimes it is more intense than I would like at times, and I am actually looking forward to getting done with the hard part. I reread the Saga’s post. It is making more sense to me now.

Dude, belial is a canaanite spirit of death. You guys are smoked

would mind elaborating if u can? i am working with him right now but nothing is making sense to me on whats happening in my life.

Only to get the attention of the “keyboard” occultists who are either not really having contact with entities or are in actuality putting their souls on the line out of ignorance or sheer mis care for their future lives. If you make contracts or spirit contracts with entities by inviting them in. Make sure they are not decedent or are capable of expecting you to commit some type of sacrifice that could jeopardize your economic future and spiritual innocence.

Don’t make deals with entities for things you can learn for free with academic learning. The things entities teach can be learned through past humans who have worked with them
You don’t have to risk doing it yourself.

Yes, the god Mot influenced the entity Belial. People who suggest these entities like it’s some video game to borrow them return to your friend once done are suckers. Working with a spirit is not a fucking 5 year trend, this shit can be permanent if you don’t know what you’re doing. Long after some assholes have left esotericicsm

You’re ok man. I would advise you to not be decieved by flirtations or aesthetics or what they can do for you. The attraction is different then the actual stuff and once you’re in it can be scary to navigate if you don’t have the proper tools. You’ll be fine. Just don’t promise anything or make any pacts saying you’ll do this for this and etc or make “heartfelt” confrimations to the entity when you don’t know or can’t predict what the entities future intentions are.

What do you mean your life is not making sense to you? If there’s something unobservable that you’re confused about. Best to let it come to your mind eventually rather then have a potentially untrystwirthy source try to reveal it to you.

thats funny you say that cause i do have a 90 days pact with Belial. and he is one of the few spirits that when i say his name my body hair stands up and my face get goose-bombs. Also, what do u mean by the proper tools ?

Whats ur story with king belial ?

Just don’t flirt with him or others. Its garbage.
A tool would be a vehicle by which you could banish the entity or finish whatever contract you have agreed to. And don’t banish them by way of using other entities to make it happen, do it using the power of proven spirits ALREADY in your life who love and care for your future or look into ways of just getting rid of the fucking spirit period, with yourself or own power. There’ a lot of fanboy group mentality herd mindset among the elite of this website and if they know all their boys are gaining hits from people following the LBRP instead of some other banishment that exists their not gonna tell you. Its selfish individualism.
There’s a gentleman by the name of “Howling Wolf” on YouTube. Hes a Germanic lad with long hair and beard, I would contact him and ask what you could do to finish your contract or even leave without even finishing. Even spirits can lie to you and say you have a contract that is not finished only to make you do more shit for them.

Just look into it cautiously, mindfully and without goosebumps. Then make your move.

The info on the entity mot influencing belial is sound academic advice. But simply it being a “god of death” does not necessarily disqualify it from being a good source. But I would look into things with a skeptical mind always and the potential LONG term consequences or after thought facts of working with an entity. This way you won’t be hindered by regret.