Pintzal He Who brings War and Blood

Through use of the pendulum and letter chart I have started mapping spirits that for some reason or another I possess some connection to in terms of energy and vibration either by exposure to outside forces or by the nature of different aspects of myself both light and dark.
The first of these entities revealed by the pendulum was Pintzal a malicious demon of war and bloodshed. Commanding only one legion of those damned by their rage or guilty of great crimes of war and violence.

His power is associated most closely with the planet mars and he seeks only to bring further violence. A lesser demon with the sense of a mercenary spirit for many gods. His name may be only relation to my connection to him.

His power lies in teacher to conjure and control rage to bring war and violence or to be channeled in the use of power through fortified will. His power to fortify the will is that of establishing the will to resist the strongest horrors and war unscathed and to carry forth past that which should break a man and destroy his mind. He can also break the will of the weak with such horrors and desires leading them to acts of great violence. Every crime and atrocity of violence and rage can connect back to him in some aspect as well as those of war.

“There must always be blood, either brought about by my works, or as sacrifice to me.”
“The power to exceed the strength of a thousand men or the power to damn them all is my rage.”

His legion is known as the Legion of Nha’Ghorzal or the Nameless Legion which from the impressions I got is more a mercenary army of rage filled shades turned demon and spirits of violence and bloodshed employed by whichever war god enlists them at that time. Likely part of many nameless but powerful masses of beings that serve in the legions of greater entities.

I do believe my connection to him stems from my past anger issues and rage which I have channeled off into other emotions and activities as well as my love of macabre and the various horrors and abominations of violence and gore mainly as theatrical elements in stories or games which does seem something shared among quite a few. I shall continue exploring these various spirits that the pendulum method of divining gives whether angelic or demonic or elemental and whether already known or unknown by name. If anyone wants to try and work or contact these beings to see if they change largely from person to person feel free to. This one I categorize as malicious because of his blood thirsty nature and the horrid acts he desires to cause so exercise caution with this one.

Well well how is he summoned

His sigil is in the picture. I made contact through evoking him by name and planet into a mirror and communicating through that.

Through use of the pendulum and letter chart

do you write down the alphabet and then see what letters get a reaction from the pendulum?
i would like to try this to see what spirits i have connections to 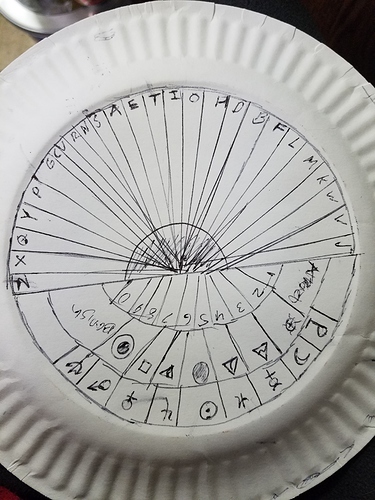 20190206_235258.jpg3024×4032 3.39 MB
Obviously the lines are a bit messy and I have worked out a system of communication that lets me know which side and row to use with the chart. You can also easily google pendulum charts to see more examples.
It takes a bit of practice and I recommend going into meditation and calling forth your connection to the universe and higher self so your knowledge is expanded on a universal sense to come through the communication.
I form an astral circle and perform a shortened version of the LBPR and then calling in my connection to the universe just hang the pendulum over the middle and clear my mind to ask a question and see where it swings from the center.
3 Likes
66Sykez February 7, 2019, 8:02am #7

thanks, i’ll definetly look into that more after work

i’d imagine you could probably communicate beyond yes and no questions with that method
maybe have an empty space to seperate the words, but probably doable with enough practice

Yep a large part is working out the language with your own subconscious of how things will be relayed through the pendulum. For instance you can have a clockwise circle in the middle represent a space and counterclockwise the end of the answer. Yes can just be simple up and down and no side to side without even needing the letters and spelling things out goes surprisingly fast once you get into the swing of it. Pun somewhat intended.
It can also be used to help identify aspects of spirits it might name for you that are not recorded such as if they are elemental, angelic, demonic, and what planet or forces they might correspond too so you can work out a specific method of summoning them.

No problem. It is also a good precursor to training your sense of telepathy for spirits letting them communicate through the pendulum you will find yourself knowing what they are saying before it is even spelled out and can then communicate with beings without the pendulum though it is always useful for communicating with yourself and your own connection to different parts of your being. Not to mention things like dowsing.