A good way to combat this is to figure it out for yourself. Keep an open mind to possibilities. There were loads of religions BEFORE Christianity. Maybe research some older religions?

But I am straying away from what I want to say: Learn to Journey/Soul Travel. There are tons of threads on this forum with advice and how to. You can even PM Lady Eva and she will give you a Journeying guide free

She has done it many times before, and Im sure she’d be happy to help you start your soul traveling adventure.

Catholicism is a Magical Tradition.

Was raised Catholic. That’s what made me dark.

Well… if you’re having a hard time straying from the teachings and breaking free… start reading the bible lmao.
I was having a hard time too until I decided to read the basis for all their shit. And honestly after reading… I started to realize just how fucked up it kinda is… and I’m not really sure I would want to be a devoted follower of a god like that anyways.
One that is praised for giving us free will, but condemns you for using it. And is supposed to be loving and forgiving… but kills without a second thought.
I think you just need to ask yourself a few questions.
What did that religion ever do for you? What good is faith if it keeps you from asking questions?
Do you really want to serve someone who would wipes out entire civilizations because they dont praise him?
Do you want to stick with something out of fear?

Okay so as of now I am trying to find truth. Any truth regarding hell and what hell is. I did some studying from the bible (I live in a very Christian household) and I read that it’s a place that was created for “the devil and his angels”. It was meant for THEIR “punishment and torture”. In fact this is the argument Christians give when explaining why a loving god would create a hell. I also did some studying on what the word “hell” meant and where it originated from… And the original meaning o…

Well… not really the aspect I was referring to, but sure lol.

Yes lol. I just feel like theres so much hypocrisy there. Even in the church theres hypocrisy. I dont think I’ve seen any bigger group of liars and hypocrites than in the church.
I mean we’re all black magicians but at least we say things straight.

YUP. Over the years the catholic church has become SO twisted and corrupt it’s ridiculous. 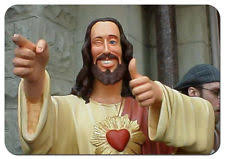 I wish Alan Rickman really was the angel Metatron. It would make evoking him so much better

I think you first need to empty your mind completely… from everything. Then program it with what you want. Step by step. It’s a life time process, not a single event or course.

Meditation will be very helpful. But it must be focused on a new specific principle or belief each time. It will also help if you watch debates or lectures by atheists, debunking religious B.S I can suggest : christopher hitchens - sam harris and richard dawkins. When you’re watching a movie or a long video, and relaxed, your mind is already in a trance-like state, watch as if you’re studying… not just listening. Try to focus on their arguments. Think about it… research any point later after you’re done watching or reading their material.

On the other hand, you also should take your steps in the left hand path, without force or extreme views. It shouldn’t be a reaction to religious dogma, or the rest of your life would be still affected by religion but in an opposite direction. Try to connect with what - you - feel and think about this path. The philosophy, the principles, the way of life… away from religion as possible.

Most important, in my opinion, is that you don’t replace one dogma with another. So keep your mind free from that… get it busy studying and understanding instead of believing or “having faith” in anything without reason or purpose. Train your mind to question, investigate, argue, test and examine. All those skills or mental muscles need to come back to life, by training and practice everyday.

I keep thinking that being on this path, the Left Hand Path, evoking demons and performing magick, makes me a dark person. An evil person, perhaps. And subconsciously, I worry that one day I’ll have to either turn and face the light (God/YHVH) or condemn myself to eternal suffering in the Christian conception of Hell.

It’s a zero. Just by evoking demons practicing some occult arts doesn’t make you a dark person, nor evil or wicked person.

This is where wickedness and evil comes in: When you begin to abuse the knowledge (power) you have.

Trample on the weak; those that are still trapped in the false belief religion taught; those who say there is no gods, no spirit, the ignorants ones who knows no-thing about everything but believed they knew everything; when you don’t use the knowledge of this occult to kill or destroy unnecessarily; and the likes, but practice **Modesty, Simplicity, Respect to the Brotherhood, Bury Hypocrisy, Don’t despise the Non-Occultic, and the like (for this is why gods are called gods: live and lets live). Then you can be called a Mage, not an evil or wicked person.

No condemnation is coming to you.

What hell is isn’t what religion teaches. So, put those belief aside, and stay humble and truthful to your self and the path you have chosen.

Know that, though not all men are called but many of the called are chosen, and that is as soon as they become fit for entrance. So do not hate nor despise the non occultic but admonish them, for they no not that we are born into this world through amidst the Darkness of Matter, and the strife of contending forces.

When Catholic was still Catholic, the Priests also dive into occults, in fact, many of them then are exorcist, invocators. So you are doing nothing wrong in any, ye strangescientist.

Drinking itself isn’t bad but not to drink responsibly is.

Study. If you have doubts, then study some more. Search the facts and question everything. Besides, why would anyone turn to light after they experienced the freedom of the darkness?