Okay soo,
here’s the deal.
i have a book …
which contains unknown language,
if someone know the language it will be great help for me.
i will put a picture to the subject.
just one paper … or leather … anyway. 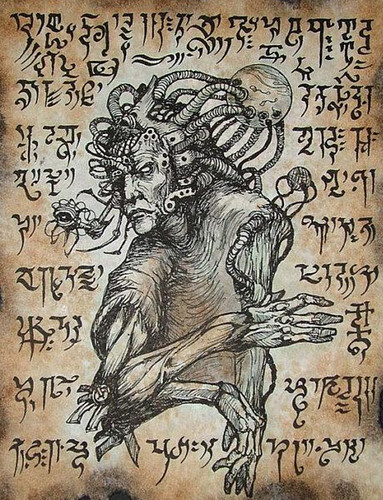 I’m not sure but to me it looks like Arabic in some awesome font.

i was guessing it’s an old sumerian language

i was doing a small research and found out that it’s part of arcanian language,
So can you tell me more about R’lyehn and how to translate it ?

it’s actually … it has been written by arabian magician who believed in Cthuhilu and Ye as gods … he was thinking he can reach them through magic.

Just Google “R’lyehn alphabet” and the key will come up. There are multiple versions though. Here is one: 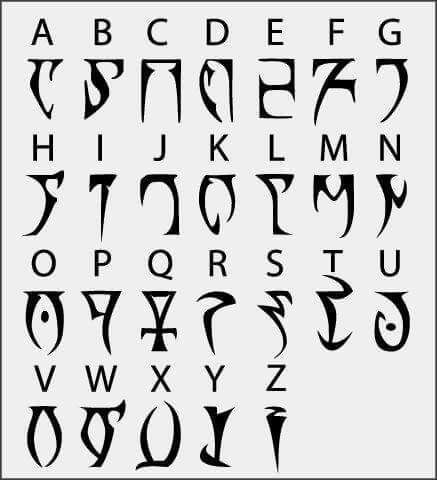 Usually such alphabets are created for role playing games, but also pop culture (Klingon), and novels (Tolkein’s Elvish). They can be used magically, to give a more arcane feel to petitions and such. They hold power because many people believe they do, and like other magical scripts, they can be fun to use.

Edit to add: It’s also possible that the script in the image was completely made up by the artist and is just meaningless gibberish. That image was created by an artist named Daniel Govar on DeviantArt.

so it’s just a sick piece of art, not much else

Where did you get this book

I have seen this book on yt or somewhere

It belongs to arabian magician, The cipher.
Al Azif… Abdullah Al Hazrad
I have the full original book tho
The book was translated into Latin from old African language and the original manuscript was written in Arabic

Everyone has a respectful way of view…
I know the true story before it turns into a joke by H. P LOVECRAFT.
He coded it tho in other language… Language i have seen before in other books of magic that its actually so dangerous to use or even see…
The talisman and the circles in the book are treasure.
The corps of the dead magician still exists and no one how ever how powerful he is… Can get near the body… He has been killed by the same creatures… In a new day at the morning… Infront of all people… A monster show up and tare him apart and sliced into pieces and took him to the desert and was buried under the sand of the desert of the east.
The reason for no one can get near the corps is they are protecting the body of him.

Have you read S been qayin book?

The book of smokeless fire

Dude, the Necronomicon is fictional. Abdul Alhazred never existed. As I pointed out, that image you posted was created by an artist by the name of David Govar on the website DeviantArt. There are many more just like it, by different artists.

the Necronomicon is fictional

No, it’s really not lol

Only occultists choose to ignore the fact Lovecraft made it up because of the romanticism of the idea of a book of ultimate power that drives one insane when read (which isn’t actually original to ol’ HP. He took the idea from Robert W. Chambers’ The King In Yellow).

However, as the Chaos Magick paradigm proved, anything, including fiction and pop culture, can be used magically if invested with enough belief.

Still respecting your point of view.
His death is documented.
The real arabic book still exist with a prince in arabic country.
I know that flr sure.
Yes maybe the book im having is trash
But the idea here isnt invoking people spirit.