I am wondering why my sour, destruction and break up jars have not worked so far.

The first one I did, was in the beggining of May, it was a break up jar, it contained everything needed - vinegar, lemon, lime, chilli flakes, hot pepper flakes, rusty nails, the names and DoB-s of the targets, rage, focus, desire, cursing, I called Asmodeus to help with it, gave offerings, blood and etc.
Three months later - nothing, the couple was still together.
And no news for fights or hate or any problems between them.

I decided to make another break up jar with their pictures this time, the same ingredients plus few more - broken glasses, poisonous seeds, mustard seeds, dead bugs.
This time I worked more days on the jar but again - no result.
The couple is still together, they like each other’s post on social media, and no news from nowhere that anything between them, is wrong.

Several months passed again.
I decided to make a sour jar for one of the people from the couple, added a lot of anger, rage, hatred, many dead bugs that I’ve been collecting, a picture, spoiled milk, and everything else. I worked on the jar for 9 days.

This was two months ago.

Two months ago I did not hope it will work, I was sure it will work, considering the efforts, the emotions and the will I put in there.
I did not lust for results, I stopped checking anything about them but again, I have no results from these jars.

And I know these working have helped many people, I am wondering what I am doing wrong.

None of my jars have worked so far for almost a whole year.

I know that these jars work slow but eventually they work. But most of the people I know that have had a success with them, have gotten their results in a month or two.

Maybe Asmodeus did not accept the task. Maybe the couple have some powerful protections although they are not magicians.
I don’t know anymore.

Someone has told me I have to add a graveyard dirt in the jars to strengthen them because otherwise they are very weak.

Anyone into Santeria, can you colaborate please?

I’m gonna use the Goetia ritual to try and talk to Asmodeus before doing any bottle magick, maybe you cuold try that

what happens if i dream about my victim?

whats the name of jar that is used to kill? i mean does it differ from sour jar? and if we have something like phosphoric acid? can we it burn the skin just like vingar?

Could, could I use p e e in the jar? That should add a pretty disgusting touch

Weclome @Doctor_Hugs It is a rule of this forum for all new members to properly introduce themselves, so please click on the link below and tell us about yourself and any experience you may have in magick ie what you practice, how long you have practiced, areas of interest. etc:

I refrain from using anything that has my DNA in it. But if you want to use it, go ahead

Someone has told me I have to add a graveyard dirt in the jars to strengthen them because otherwise they are very weak.

That is true, cemetery dirt is very important and has to do with infernal workings. The Devil Quran has very powerful messages that you can use in your workings

personally I dont forget about the jar, I keep it on display and any time that person crosses my mind and negative emotions start bubbling, I shake the absolute shit out of it and channel all that rage into it…its massively therapeutic lol

Exactly, best to do what feels right, I like to send all that negative shit back to where it came from, channel it to the jar (and thus them) to get it out and away from me

fantastic way to vent the rage as well lmao

Pee is used for love spells. Like dogs, you can mark the other person as yours.

Ok so im pretty new but i really wanna do this sour jar. Any tips?

Can I use this to break up two people

Welcome @Sweta_Dhal It is a rule of this forum for all new members to properly introduce themselves, so please click the link below and tell us about yourself and any experience you may have in magick, such as what you practice, how long you have practiced, areas of interest, etc:

This is very helpful, I shall be using this combined with a truth spell to torment my abusive mother very soon. Finally may be able to get revenge. Thank you

I have started on my jar. I don’t have mustard seeds or poppy seeds so I used siracha sauce instead. There’s vinegar and rusty nails too. All that’s left is the graveyard dirt and picture of my abusive mother with her full name and date of birth on the back. The picture will be the last thing added to the jar. I’m going to keep the jar around so I can shake it when I get mad at her again! 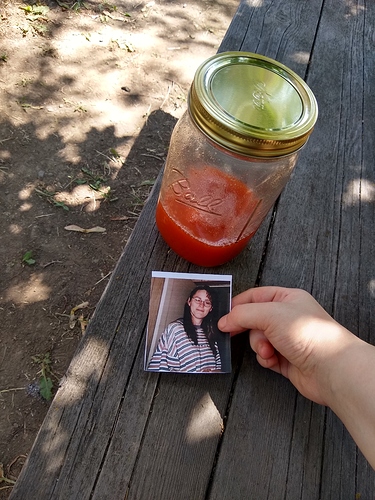 That looks beautiful. That that red colour adds some rage to it! Let me know how it goes!

Thank you. And I will. Every time I shake it I feel like some of my hatred leaves me and pours into the jar. I haven’t even added the graveyard dirt and picture yet.