My pact with Dantalion that changed my life 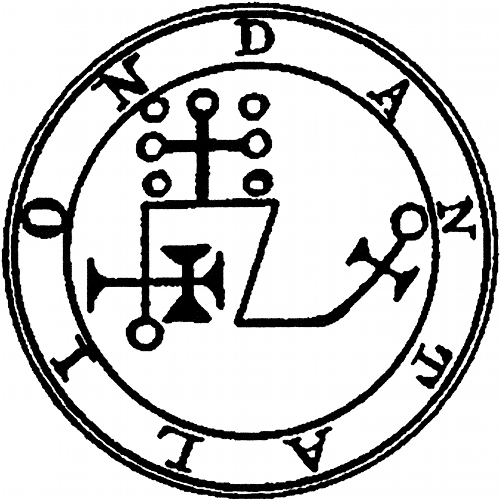 When I entered high school in my teens, I came from a rural school where I basically had very good test scores. However, in this new school I was not doing as well as I had hoped and that frustrated me. I was a fan of secret societies and conspiracy theories, studying them very thoroughly as a child, although that no longer interests me now. I formed a group of friends with similar interests and we talked about those topics and for the first time I started talking about the occult with others. One day a friend of that circle came talking about the 72 demons of King Solomon and mentioned Dantalion, a powerful duke who gave you intelligence and who taught all the arts, as well as, he was the knower of all the thoughts of men and women of the world he could manipulate to his advantage. That was an omen, a sign, that there was an opportunity to improve my test scores.

The idea of ​​making a pact with that demon was germinating in my mind for weeks, until one Friday I decided to make a pact. I did a ritual very much in the style of chaos magick, since at that age it was the very little I knew about magick. With my own blood on a rock I drew the sigil of Dantalion from the Ars Goetia and with my own inspiration and using the power of my intention and motivation I made a pact with the devil.

Did I get the knowledge I wanted? Yes, I did, my grades improved tremendously, and my brain worked smarter, but at what cost? My mistake was “not reading the fine print of the contract.” Dantalion knows all the thoughts of the people of the world, just as I said, and he can manipulate them in his favor. As the days went by, I became very anxious and neurotic, until I was diagnosed with an Obsessive-Compulsive Disorder. My life was ruined. Nothing made sense, nor did school matter to me now. From that day on I began to study the occult arts tirelessly, focusing mainly on goetia, demonology and ceremonial magic in order to find calm in my soul. However, all that occult knowledge that I was acquiring with reading and practice was a consequence of the same pact with Dantalion. Four years later, I learn that Dantalion is the ruling demon for my date of birth according to the Shemhamephorash, opposite the angel Haiahiel.

Today many occultists in the English-speaking sphere (since I am from South America) recognize me as a great occultist despite my young age (so far I am 20 years old). I made a very strong friendship with some writers and with Edgar Kerval, who has allowed me to publish in his publisher twice. Although that pact ruined my adolescence and turned my life into a martyrdom of constant anxiety and nightmares, if it weren’t for him, I would not be the occultist that I am now.

This is my life story, I wanted to share it with you.

Thank you for sharing, for once someone encourages us to be cautious when working with these beings… I’ll make sure to use an appropriate and safe system if I ever attempt to work with them.

Dantalion knows all the thoughts of the people of the world, just as I said, and he can manipulate them in his favor. As the days went by, I became very anxious and neurotic, until I was diagnosed with an Obsessive-Compulsive Disorder. My life was ruined. Nothing made sense, nor did school matter to me now. From that day on I began to study the occult arts tirelessly,

This is good information for people to know. Thank you for posting. Dantalion has the ability to make someone completely obsessed, he’s actually the spirit I work with when making obsession jars or working obsession spells. He’s very effective.

This is interesting, he really worked hard to give you your goals!

More than goals the things that I want to show here is that if you are doing a ritual of pact without precautions and doing a improvised ritual you can end insane. Dantalion, as a fellow said above, is a demon that can obsesse people to death.

I really need Dantalion The Most In My Lufr Right This Moment, I’m very new here and first session final exams are in some days. And I’m not even unserious but no matter how much I try to read…well I don’t need to say much from here

Hello- I’m here for a previous post. Thank you for this information- I have just one follow up question. How do you prevent this obsession, as the spellcaster? Of course you wouldn’t want to stop his work towards obsessing your target, but I’ve heard he tends to obsess the spellcaster, as well.

I’ve never used Dantalion to obsesse other people, but he have a great influence in my mind. With the past of the years I learned to deal with that, even I needed to go to therapy and psychiatrist.

If you could go back in time and stop yourself from going through this, would you?
Do you feel like it was worth it?

Without that pact, I wouldn’t be in this fascinating world which is the occultism, I don’t regret of nothing.

I find your story quite tragic.
But it’s good that you have no regrets, in a way.

Welcome back @RUSSIL Please be aware that all posts must be in English. It is the common language of this forum and helps to facilitate moderation. Also, it is a rule that all new members must properly introduce themselves, as you were asked to do after your first post back in October, so PLEASE CLICK ON THE IMAGE BELOW and tell us about yourself and any experience you may have in magick, such as what you practice, how long you have practiced, areas of interest, etc:

To some extent I do find it tragic too. I do feel maybe there were other factors at play that led to the OCD and other mental issues but at the same time this is why I am not a big on pacts. I prefer good ole quid pro quo. I ask you a favour and I grant you a favour. We are all happy and move on until the next time. Or pathworking etc.

Dantalion has the ability to make someone completely obsessed, he’s actually the spirit I work with when making obsession jars or working obsession spells. He’s very effective.

Interesting. Im curious if he would work well with a spirit like sitri to attract a relationship?

Hey there, thanks a lot for sharing!

Im wondering if you think the side-effects happened because you made a mistake or do you think they had to happen to make the contract come true?