Hi everyone. I’m a Feng Shui practitioner and a Taoist magician, I would like to show you my outdoor altar and explain some of its meanings. The altar is named “The Altar of The Seven Stars” it is based on Zhuge Liang’s Taoist altar from the historical novel “Romance of The Three Kingdoms” It was built in accordance to the alignment of The Northern Dipper (Seven Stars) it is a wooden platform, elevated from the ground which is made of red earth, it faces towards the South, the direction of The Red Vermillion Bird. Its main use is weather magick and nature manipulation. It’s an ideal place to communicate with elementals and nature spirits. The Yin Yang circle represents my path, neither black nor white, I walk the grey middle path. If the circumstances are Yin then I become Yin, if they are Yang then I become Yang. I never settle for either as I prefer balance. 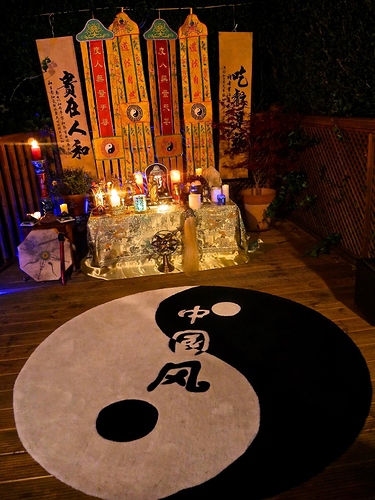 On the altar table is a statue my main spiritual master, Zhuge Liang, the famous Chinese general, inventor and Occultist from The Three Kingdoms era. He watches over the altar and oversees everything that is done there. The two red candles either side of him represent “two eyes” watching me at all times, the eyes of the source, God, the Tao, the higher self, whatever you call divinity. There is a statue of a bronze dragon, that is Ying Long, the one thousand-year-old winged dragon of rain, he is able to create clouds with his breath. He is useful for rainmaking and flood control. The large candle on the left is called “The Master Lantern” it represents the magician’s fate, if the flame goes out then misfortune will result for the magician. In Taoism, an altar should be welcoming, inviting and colorful. Its main goal is to invite gods and spirits to stay for a while. 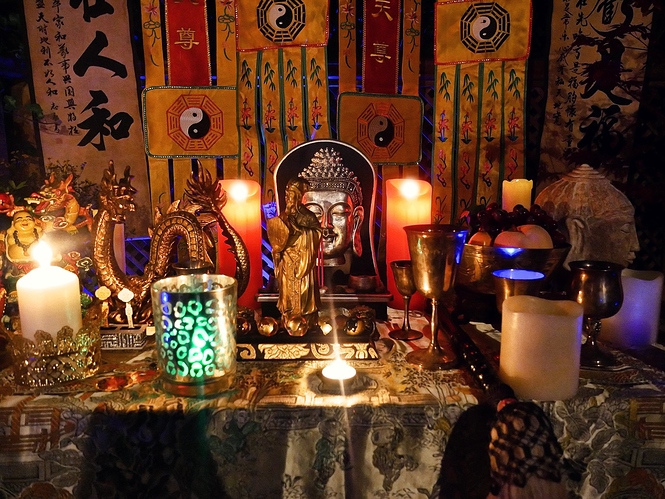 The flags, banners, and scrolls at the back behave like talismans, they draw in the desired energy like magnets. The yellow banners have the symbolism of the Eight Trigrams of the Bagua. The broken lines represent Yin, the unbroken are Yang. The father above, the mother below, the solar powers and the luna powers. Each trigram represents a combination. Each opposite balances the other, they are inseparable despite being different. A lot of people are not aware that there is a divine trinity going on here. The candles and their light is Heaven, the table is Earth and the magician is Man. Man, Earth and Heaven are known as “The Three Magical Powers” in Taoism. Only when they are properly aligned can magick be done safely. There’s more to say but I’ll leave it there for now. I hope you’ve found this informative, please feel free to ask any questions you may have - Lord Josh Allen 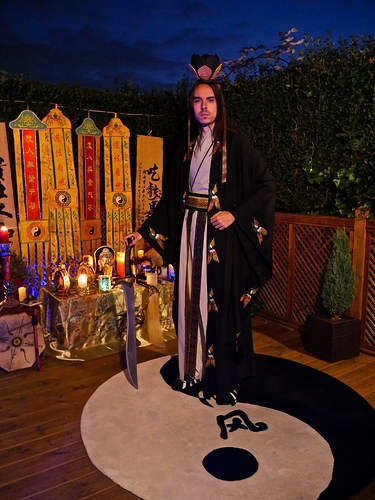 Always lovely to hear from you Lord Josh.

Out of interest then, how did you meet your spiritual master, Zhuge Liang? And do you happen to find a use for Fu in your workings?

I wish I was your neighbor.

Zhuge Liang is still worshiped in my country today. I wonder do you have any special connection with him?

And purely out of curiousity, why did you choose Buddha on your altar?

this is so beautiful!

Thank you, sorry for the late response, its been crazy here with the Covid nonsense. I met Kongming through a series of rather unpleasant blackouts in 2007. I would feel very unwell, dizzy and nauseous and then I would completely pass out. During the blackouts, I would have visions and experiences with Kongming. This happened a few times until eventually it stopped. It scared the heck out of me. I’m happy to say that things are much better now and I don’t have those problems. I now communicate with him through other ways.

And yes indeed, I do use quite a lot of Fu talismans in my workings. Here is my desk in my indoor temple, I was creating some Fu earlier this year. Some Fu talismans should be carried in the pocket, or displayed at home, whilst others should be burned. Taoists will often use them to influence luck, to tap into the metaphysical powers of nature. Some are used to block, strengthen, amplify and transform. To attract or repel certain energy. Whilst other Fu can be used to “bind” spirits. Crafting Fu is often considered a form of alchemy. 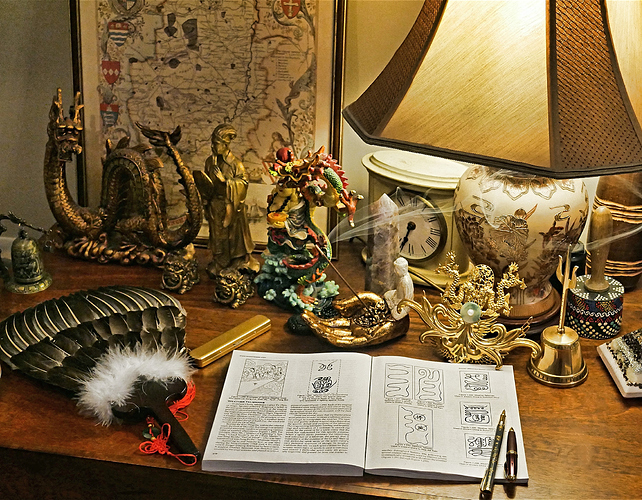 May i ask because i have curiosity for that kind of practice.

Your altar is beautiful, and your desk is too, your clothes and sword are cool too, I might draw some inspiration from this

Hi there Serpentslight. I highly suggest you look into practical Feng Shui, it can be as easy as you want it to be. One can manifest wealth, improve relationships and health by using Feng Shui principles. Also, consider looking into The Eight Immortals, they are great entities that have a massive range of powers which are beneficial to practitioners. Although I do follow a Taoist path, I’m not an orthodox Taoist. I have my own code of conduct that I live by, I’m a strong believer in bespoke spirituality. Having everything tailored and suited to your needs. When you get some time, please check out my videos on the subject, they are highly informative for people of all backgrounds.

Thank you, very kind indeed. Feel free to take anything from my practice. I encourage this. (:

I thank you that you took your time to answer my Question.

Will soon look into it.

Goodbye have a good day.

It seems like a lot of people really love my style and aesthetic. Thank you everyone. My “image” is a massive part of my own personal practice. I spare no expense on my robes, my talismans, my artwork, etc. I’m like the opposite of minimalistic magick. I don’t claim that my way is any greater than the simple way, it isn’t, I only claim that it is much different. One does not need a truckload of paraphernalia and accoutrements, as long as you are dedicated and open, things will naturally fall into place. However, if you resonate with my opulence and extravagance then welcome to the wild side! 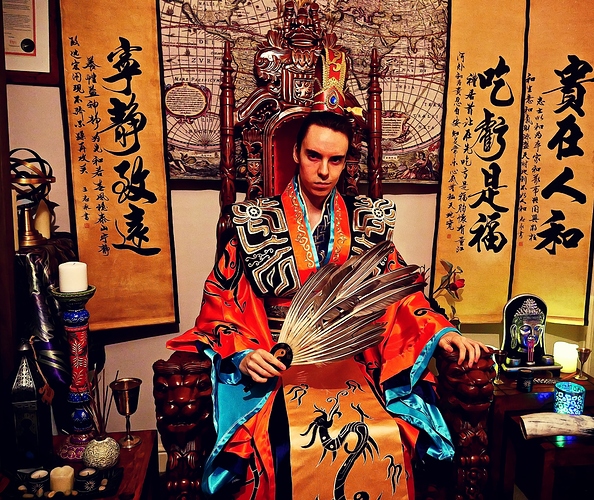