Movies/Tv series which present The occult in a positive way

I c. Ok then. Let’s say you have the skill and able bodies. What would be the actual guestimate cost to do Advertising as far as using the Media outlets/platforms? If you were to turn one of your writings/books into a full DECENT (not rushed) film and maybe a series what would you guestimate it would cost to do that?

All anything would ever cost is to get some A-lister to either cuss you out or praise you on social media. And/or get in the mainstream press in some way thast’s not totally negative.

Sorry to reply because I know you didn’t ask me but this was my world as well for a long time… 'kay shutting up naow!

Don’t shut up, in all the time I have known you your input has never gone to waste.

No I was being serious that’s fine as I was genuinely curious how everything works. It’s a whole new world in itself. AND…there are alot of JEALOUS people in that world it would seem!

But that’s a brilliant idea, using negative attention for promotions. I think Trump used that tactic.

Whoever is getting the energy good or bad gets the attention and it works.

Okay strap in because I am going to take you on a ride from the red carpets of Leicester Square, to bean soup in my kitchen, and you don’t get THIS on any other black magick forum.

It’s not about the merit of the product (be it media, clothing, chest balm, some new diet, whatever) - it;s about a single high-profile imprint into consciousness, that then gets commented upon, make that big enough, and BAM - years’ worth of tedious advertisements that people tune out, as they (we, I do it too) tune out worthy but dull pinned threads on forums, are surpassed.

Here’s one tale: let’s say that, I admired the book The Martian, and I really did, and do, posted about it on here, so when it was released as a movie in in 2015, I went full fan-gal, we did the preview screening in Central London, bought the DVD, okay pirated the extra ten minutes one they did months later, but I took at least 7 people in total to see it at the movies.

What did I see?

I saw the cast, that scrawny redhead captain was far better with fans on the red carpet than expected, Matt Damon may be a libshit but he has awesome ability to use ANY smartphone handed him to take portraits with the fans, and I noticed, all the skinny neurotics we call movie stars, they mostly used Sharpies - the grey body of the pen, black lid - to sign the many and varied items handed them on the red carpet on the day.

So, I observed this, 2015 mind you, and I did hit YouTube and watch a few more red carpet signing kind of things, and although this didn’t occupy even like 0.0001% mental space, I noticed it.

Stay with me, this is going somewhere!

Now, in England, Pilot is a good brand of pens, metal barrel, the kind of ink you could probably get high sniffing, NOT like Sharpies anyway.

So, in 2017, and although I was in NO WAY on the red carpet, when we planted some runner beans and stuff in spring this year in the garden, I figured, if people get autographs, and they do, including in all kinds of weathers and on things from DVD cases to paperbacks to photos, and they sell them and trade them, and IF Sharpies are like a red-carpet staple, which they do seem to be - well, anyway, I bought a pack for like £8 and labelled our garden. and they lasted just fine, and THAT - insane and wordy as it was - is why Sharpie, NOT Pilot, NOT anyone else - get my £8 per pack pretty much every time now we need a waterproof weatherproof(-ish) marker pen.

Not because the fucking Metatron showed up and revealed the truth to me. 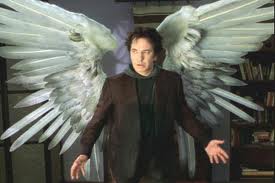 Not because I spent hours spreadsheeting the merits of different brands of marker pens.

But, because I saw famous people, mosty nutcases I do NOT respect apart from their little dayjob of pretending to be someone else, using a grey-barelled pen on the red carpet, and I knew that real people were happy with that and that it seemed to work.

Is this story mad?

But it was a real example of the concept I described above, so, yeah.

ALL people care about is, “What will work for me, and will it make me feel good while I use it?”

I mean that is the human condition defined.

I saw those pens seemed to work across surfaces etc., went and bought 'em - didn’t feel the need to run a challenge (some people will, they’re the genuis tier people, but NOT your core market, they need to be leading the next wave in some way) - and they have worked.

NO WAY would some expensive advert have done one fraction of making that sale.

The 9th Gate. The Devil is a woman in that one. But what I like about that is it shows her as being supportive of a certain man in his Magickal journey. The death of another guy at the end shows an interesting occult concept, though I didn’t think he was entirely wrong in his choice I believe it displays an important concept.

Charmed did to some extent, although VERY white light, and demons were mostly really horrible, and in Buffy, Willow’s witchcraft was helpful, but also dangerous when she want “dark.”

I love dark Willow (so naughty skinning the bad boy

) but I haaaaate when they compare magic to heroin and Willow gets all irresponsible and spun out. I have experience in both and all i have to say is LAWL (idiots)
Amy the rat sucks too when she’s not a rat any more, she turn into a POS.
Besides the witches, there is a ton of magic in Buffy that they all use to fight the forces of “evil”, and at least some of the evil is fun (like the singing demon

or Spike and Harmony).

I used to like Charmed when I was younger. Watching it as an adult I can’t stand it. Can’t use their powers for personal gain? WHO WOULD WANT TO LIVE IN A WORLD LIKE THAT!!! There is episode after episode enforcing the idea that they should just be miserable and put everyone in front of themselves. What a load of crap. They are pathetic and depressing. I just want to watch Rose McGowan and Alyssa Milano do…anything really, just exist lol. So prettyyyy, want to touchhhh.

I want that book…

The worst part is when “they” call you Greedy for wanting to do well and have personal gain. Nevermind any black magick they must’ve done themselves… A dirty little.secret they swept under the rug.

You may have a partner in that. he kept threatening to hand me over to Azazel. Cause he kept trying to scare me but I kept getting aroused instead LOL.

haaaaate when they compare magic to heroin and Willow gets all irresponsible and spun out.

They are afraid to have someone use dark forces and actually master them. Characters always get addicted and have to have someone “good” save them. Or they are a bad guy. (Why i stopped watching supernatural) Like we can’t have people manipulating dark forces cause then all the cool kids would want to do it ROFL.

I guess my generation had The craft? Noone has mentioned that yet.Its cheesy to rewatched but it sparked my imagination.

Nah. Some of the cool kids use dark forces. They just don’t like competition.

A movie i liked was one called 5 Girls. It is your typical RHP type movie, with a woman offering the souls of 5 girls to 5 demons in exchange for that of her little sister who was dragged to Hell, but what was interesting about it was that one of the girls, to protect herself, cast a Wiccan circle, charged by the Goddess. It was one of the few movies I’ve seen where a magick based faith, rather than Christianity, was used in a positive light.

Another good one is called The Judas Ghost. A bunch of ghost hunters, working for some kind of clandestine organization, combat an evil spirit that had destroyed multiple magicians before them, using magick. Typical good versus evil but well done.

You may have a partner in that. he kept threatening to hand me over to Azazel. Cause he kept trying to scare me but I kept getting aroused instead LOL.

That made my morning!

I love that show and watched it religiously he he he.