Manifesting a Longterm Relationship (Focus is on Longterm)

Dating today really sucks like hell. For the ones that use astrology: I have Venus in 12/Pisces Square Neptune and opposing Saturn/Jupiter. Venus is conjunct Sun/Mars.

That already doesn’t make for stable relationships.
I have been very successful in manifesting partners that I wanted, but it really takes effort to keep them today. I have noticed that planetary influences should be used with Magick/Manifesting because if you have bad relationship transits, you can do as much Magick as you like, you’ll get partners that suck in the end.

For example, the love of my life, I manifested during a Uranus/Jupiter transit, that were closely conjunct my Stellium of Ven/Mars/Sun.
I don’t want to make this an astrological discussion, but I believe it should be considered if you want to manifest really big stuff. Jupiter for general luck, Chiron for Healing, Saturn for work.

I did the same rituals, but was never able to manifest a similar love like with that transit. That doesn’t mean others were not good, but compared to this person…maybe 55%.
When I look back, I do not think anyone loved me the way he did. But your Abilities to use Magick should actually improve over the years, right? That time, I only used the law of attraction - but obsessively.

Which patterns have you noticed in manifesting longterm love? Have you noticed that it has become harder to manifest dream partners? They either become stalkers, want to put you down or are not reliable. I have experienced some serious character switches where I did not regonize the person I knew anymore. I believe today, to keep a man faithful, you need to use Magick almost every week and do regular Binding. People have such a short attention span. Everyone seems to struggle. Kind people who believe in romantic love get seriously traumatised.

One of the best tricks to keep a man interested still is to feed him period blood. You can be creative with that and he will feed himself lol. I know it’s gross, but I have found it to be the most effective rite ever.
Sexual energy is the most powerful to create a bond if used correctly - eye contact as much as possible. Therefore, do always give a man what he wants (after marriage).

So what did you notice and I would be happy to hear if anyone has manifested a marriage with Magick and they are still together. I want to understand what I might do wrong or maybe for some people it’s just not meant to be (that would be over 50% of the population today).

Do you have specific tricks using Magick to keep your relationship safe from outside influences and other women/men?
Did you make a pact with a specific entity that changed your life?

Actually all these aspects are cool. Venus in pisces is an amazing aspect and in 12 has to do with secret society or anyway not the type of traditional relationship. Venus opposition Saturn is actually a powerful enduring aspect and tells you to look more for experienced persons, Professors, scientists or someone with age difference. In relationships are far more important the middlepoints sun/moon and mars/venus and these relate to the planets and cuspids of your significant other

Your Venus is not bad as mine- it is in Virgo ( in her falling sign) 2 house conj, with sun and mars and have sqare with Saturn, which is in Sagitarius in 5 house. And also Saturn is ruler of my descendand. So my Venus is more for money, and saturn really shreds all my love/sex relationships effords. Even with magic it is hard to obtain any closer relationship

I agree that Saturn hard Aspects really mess you up and do not as traditionally said, just give you older and wiser partners.
They give you partners who hurt you beyond imagination. You can do Magick and find love, just to get your heart shredded in the end.
When I see an older man in his 60ies looking for love and feeling bitter about it, I often find harsh Venus/Saturn aspects (sometimes Neptune is involved as well).

What I noticed is that you should avoid Venus connected to hard Saturn or Neptune (even the conjunction) in Synastry and Composite if you have it in your Chart.Those relationships will really mess you up.

I was born under a Venus aspect. My sign is Taurus and the ruling planet of Taurus is Venus is it not?

Just read another post on writing spirit letters for personal advancement. This could work for your love life; the forces could give you workarounds for your planetary placements. Give it a shot and see what happens.

I can do your chart for free if you like and tell you a lot about your love life.
I am almost sure you are single if you have Venus/Saturn or Venus/Neptune in Harsh aspect.

DM me and send me your birthday, birthplace and PLEASE EXACT birth time.

:-))) I did this when I was 17.
I have stopped believing in it. I’m fine now with having temporary relationships and be very cautious - not get attached too much. You just can’t do this with Venus/Saturn.

I’m curious if it’s a way to overcome this Venus/Saturn aspect? Someone any clues? I tried invocation but not much effect. I started work with sigils recently to make some internal changes, but don’t know if it will be sucesfull.

Yes, there is a way. Ciro Discepolo writes about it how you EXORCISE bad aspects or even transits. He wrote a book on it and has some bizarre strategies that one could try.
I believe he tells people with many planets in the 12th house to go for someone slightly damaged - like a person with only an eye - etc. You might get the idea.
They do this naturally, by the way. They choose addicts or mentally ill and get discouraged by their families to find someone NORMAL. When in fact they are simply living their aspects.

Every hard aspects need a sacrifice, they say. The bad thing is that society’s rules will discourage us from following our instincts and we want what is promoted on Social media.

I think Venus/Saturn could also be to take care of a weak partner. Someone who is poor or needs guidance, or to choose someone you work with. People who work very hard and are business people, often manage to build a stable relationship in the end. But they often choose someone because they are good partners ad can’t rely on romantic love.
But those people do have stable relationships.

People who do nothing and don’t get structured in society tend to have the most stress with bad Saturn aspects.

I think Venus/Saturn could also be to take care of a weak partner.

Ou…? I was thinking this was because I’m Virgo, and yes, i like to take care for peoples. And also… was able to make some relationship with girls that needed care.

What is the title of that book about exorcising aspects? 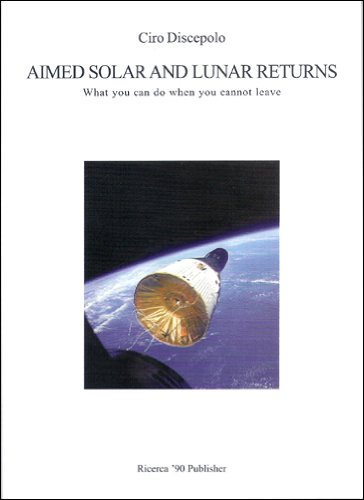 I believe it to be this one, but I cannot remember because it was in my old kindle account ( I lost access to it).
Ciro discusses aimed solar returns and how you can relocate your yearly horoscope to have a better life. The last year it worked for me, this year I relocated but I’m not quit sure yet. I should have one of the best years ever, so far it wasn’t too great.

He explains how to exorcise transits, which is basically the action you should focus on all your life if you have the aspect natally.

He makes some incredibly interesting points.
Of course, you need to be a bit creative and experiment. He is a teacher, but not a god. So you can take his advise but need to try how to implement this perfectly for your own chart.

What I’m trying to do with Relocation now is to focus my Solar Return on Love. Which you can do by placing the Venus in the 7th or 5th house each year.
But you need to avoid the 1st 12th and 6th house. I did it this year and combined with magick it could work. I will let you know next year;-)))

You can never rely on one element only. But I do believe combining plenty of things, does the work.
I know Black Magicians do not believe in karma, but it works in my life : Do help other people in their relationships and do a lot of good things, give money away etc.
I always forget about it because I have 4 points in Aries and tend to be narcissistic in nature LOL.
I actually hate doing good…

How to do this placing? It is needed to move in other places or what?

It is extremely easy, but you need to be open to it. Best is to learn and experiment. I read at least 10 books on it until I got a bit of an idea, but Ciro’s books are definitely the best. If you have no clue about astrology, it will be very difficult. The idea is to travel to a certain area of the day of your birth each year. This way you can rotate difficult aspects of your Solar Chart into easy houses.
Solars can be calculated on astro.com. In the beginning I would hire a professional to do it for you.

You have to stay there for a day two before and after (Ciro says only the time of your birth time, but I would just want to be sure if you make such an effort).

Then you can avoid certain downfalls and problems that seem destined to happen during the year. Some people claim to have improved their lives drastically that way.

Ciro’s books are really the best because most people do not avoid the 12th, 1st and 6th house and wonder why nothing improves. Ciro is the only one who uses this strategy.

You just travel and stay there for a few days on your birthday. Relocation works as well, but in a very different way.

I tend to fall for people who are Geminis, does that work well?