I’ve just read the whole book ‘Magical seduction’ by Damon Brand.
The thing which I don’t understand is he does not tell the translation of the prayers, which I guess is pretty wrong to not let the reader tell the meaning of what they are actually saying.
And the second thing which seemed wrong is he never mentioned who these spirits are that we are calling upon? What entity they are?
Any thoughts on this?

I heard that the aura of attraction ritual employs djinn. I might be wrong though.

Are there other entities? I mean, all I know is Demons, Angels, Djinn, or maybe gods… But I do not know what do you mean by the type of entities?

In the rituals we call upon 3 spirits named:
SAH-DARE
PRO-STASS
SOL-AST-AIR
It is mentioned that these are the sprits of lust but it is not mentioned whether they are djinn, Demons etc.
if anyone know what they are please let me know.! I did all the research about this book on their own website the ‘Gallery of magick’ but haven’t found a accurate answer.
@Bizarre @sadangel

You are lucky because you are in the right place. Ask them and they will answer you as soon as possible.

Yeah! This is an amazing forum. Already been a month since I joined and it feels like yesterday.! Truly lucky to be a part of this community and to learn new things everyday.

@shinri I’ve heard you’ve worked with GOM Books intensively. Can you please tell me about this?

In the rituals we call upon 3 spirits named:
SAH-DARE
PRO-STASS
SOL-AST-AIR
It is mentioned that these are the sprits of lust but it is not mentioned whether they are djinn, Demons etc.

No, they are not spirits at all. Those words, Sader, Prostas, and Salaster, are Words of Power taken from the grimoire known as the Black Pullet, and are used to command the spirits. The ritual summons unnamed spirits of lust.

Because the book itself says ‘Once you feel that your passion is rising, say these “spirits name”they didn’t mentioned that these are words of power but instead said names.

I have the book. It says, and I quote, "Say these words, Nades, Suradis, Maniner. Know that you are summoning spirits of lust. Chant the words two more times…

Chant the following words, Sader, Prostas, Salaster. Speak directly to these spirits of lust, with authority while picturing lustful situations."

Nowhere does it say these words are the actual names of spirits of lust, only that by chanting the words you are summoning such spirits.

Now, in the Black Pullet, where these words come from, it says to whisper “O, Nades,Suradis, Manier” (once he does, the author describes a spirit with rose coloured wings appearing before him, kneeling, and his teacher tells him that the spirit awaits his orders). Then the author is told to say to him, “Sader, Prostas, Salaster,” and the spirit disappeared, to “fetch the most beautiful of human forms.”

So Sader, Prostas and Salaster, are command words, NOT spirit names. The spirits are nameless. The first set of words summons them, and the second set of words commands them.

And to answer your other question, the spirits are basically a type of elemental, as the author of the Black Pullet describes four classes of spirits, but they are not identified as any specific species name like angels or demons, only as “the perfect beings whom the common herd adore and reside in the stars; those of the spirits properly called with which we have conversed; those beings less perfect, but who render great service to humanity; those of our souls who have been separated from their body.”

The spirits summoned by the command words fall into the second classification.

Oh, and the Gallery of Magick specifically states in their FAQ that the spirits are not Djinn, but angelic and elemental:

This page is for questions relating to Magickal Seduction by Damon Brand.

I bought the kindle version of this book, maybe I interpreted that in a wrong way. 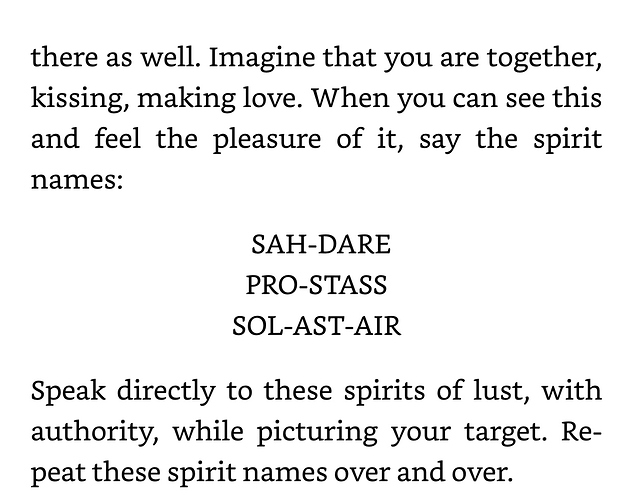 From the Black Pullet, it is obvious those words are not names, but command words. Otherwise, it wouldn’t make sense to say them after the spirits have already been summoned.

It would be like saying, “Bob, Robert, Sally,” and then when everyone is present before you, calling out, “Fred, Frank, Francine.” The first three would look at you as if you were nuts.

Yes, this is from ritual 1 but he stated the same name thing in ritual 3. If these are words of power taken from some other grimoire and he states them as ‘names’ I guess it’s a big mistake because people who have never read the black pullet would actually consider them as actual spirit names. Also the Latin chant in the book which is said to be an alchemical rite, they didn’t provided the meaning of it either and simply said ‘You do not need to know the meaning of the words’ which is wrong. It’s like signing the paper without actually knowing what’s written.
I am not judging the book. The book is absolutely amazing with detailed explanation but they have failed to provide some important insights regarding the Alchemical rite and the words of power.

And Thankyou for clarifying this point.

As for whether the words are names or not, I don’t think it matters. It’s one of those inconsequential details because the ritual works whether you are calling out spirit names, or words of power. I guess, barring any definitive sources, just take the author’s word for it.

As for what the Latin means, according to Google translate, it seems to roughly be a call to alchemy, and refers to the descent of spirit into matter:

"We descended from the air. That ascends and descends between the two movements. The emblem is composed of elements in the light of the new discoveries. It is not an accident. Clean my table, mix them with stones, the blue green gems. He came back and now on the future. There were bones. I look for a place to walk half way in the time it moves.

Yes, exactly the names doesn’t matter actually I was just wondering what they are demons, Angels etc. because I never heard those names before, but you already made that clear that they’ve used angels and Elemental in this book…That’s a relief.!

And Thankyou so much for providing the translation! I can now proceed to perform the actual ritual without any doubt thankfully.!

Also it says about Aura of attraction- ritual 3 that this ritual can be repeated as needed and it lasts for some weeks. Let’s say one perform this ritual every 1-2 months are there gonna be any side effects or is it safe to do so?

No, there would be no danger in repeating the ritual every few months.

However, if you do it too often, you might end up giving yourself a permanent aura of seduction which might be…inconvenient when you aren’t actually out looking for love.

Thankyou for answering my every question.! It means a lot.

I’d also like to Give you a special thanks because since I’ve joined this forum you’ve helped & answered whenever I turned to you.

I wouldn’t mind having a permanent seduction aura.

Like DarkestKnight said, the magick is sourced from The Black Pullet, with updates made by the Gallery. These are fire spirits, and while I haven’t worked much with this book (I usually turn to demons for seduction), these spirits are also included in a few of the Gallery’s other books, and I have had good results from working with them.

Also, you really don’t need to know the exact meaning of the incantations for them to work. I never looked up the alchemical rite, and the rituals still worked just fine. The power comes from the pattern of sounds created from chanting the words, not as much from their literal meaning.

You probably don’t really need to repeat ritual 3 all that much, by the way. My approach for this kind of thing is to treat the magick like it will work forever, and if I ever notice a fading of the power, then I can repeat the ritual. These sorts of effects tend to grow stronger over time, so you may find that the more you work with it, the longer it lasts and the more potent it becomes.

Also also, don’t be discouraged if your first attempt doesn’t work out entirely how you want it to. There is a definite art to seduction with magick, and it can take practice. Not everyone will respond well to your sexual energy, but more will than you may expect. Keep in mind that just because someone is clearly attracted to you, that doesn’t mean they will guaranteed sleep with you, even with magick. The same goes for more active flirting, which tends to happen more often when you create a seductive aura.

The power comes from the pattern of sounds created from chanting the words, not as much from their literal meaning.

How about listening to chanting of Lucifer or maybe Lilith or any other powerful demon? Listening with the intention of gaining strength to develop feelings and personality