I’m curious about something that I may have noticed in some charts (for those who believe in astrology), someone here who has this positioning (more specifically in a water sign, for example .: lilith in cancer, scorpion, or pisces in 12th house) already had the impression of feeling some entity, probably feminine (not necessarily the own goddess lilith), within itself, perhaps subconsciously, as some sort of double-personality that you are aware of?

what is the 12th house? im a Pisces and was born march 2pth on the cutoff date
my ruling planet is Neptune with a strong influence from pluto(I just looked that up lol)

but i just started summoning lillith and even without a sigil or anything it’s pretty much instantly that her or a servant of hers comes to me. she is one of the few entities that inh can feel a physical touch from. like an a tually rough on my arm when l ask if she’s there since I cannot see and can’t always hear the spirits

what is the 12th house tho?

“The twelfth house rules the subconscious mind, dreams, intuition, instinct, and secrets. In fact, it dominates all that’s hidden, including activities going on behind the scenes and confidential engagements.

Psychotherapy and psychic phenomena both fall under this house as part of its rule over the subconscious mind. Dynamics acting on this house can heighten our hunches and intuition.

The ancients wrote that “self-undoing”, meaning anything we do to undermine ourselves, also comes under this house. It governs of rest, reaching the end of long cycles – and the termination of any and all confinement, such as hospital stays, nursing home residences or even jail sentences.

This is the house we go to to heal ourselves. It also rules self-sacrifice, inner suffering, limitations and secret enemies. Lastly, this house rules charity, especially on a one-on-one basis.

A little known fact is that all large animals come under the domain of the twelfth house.

The twelfth house is ruled by spiritual and self-sacrificing Neptune and by compassionate Pisces.”

@knowledgeseeker astrological houses represent the different areas of our lives, the twelfth is usually related to the issues of mysticism, other worlds and gifts we do not know we have, or things we need to let go. You should check yours

@Keighn omg I have a friend with this position, she feels very alone and distant from everything here in the world, as if she did not find a purpose at all. I hope that’s not your case.

I have LIlith in 12th house, and only feminine strong entity presence i have experienced is my mother

In fact one astrologer telled about her after looking in her natal chart that she is unstoppabe like “The Terminator” and have very strong character, and i can tell this is true, and sometimes i fell overwhelmed by her.

Actually, that does mirror my thoughts esp after my parents going batshit crazy. When you think you know even family they get crazier.

I’m used to being alone. I walk the streets, dark forests, ruins, caves, etc alone. I fly alone (well unless you count the strangers sitting next to me), eat alone etc etc.

In fact too much of people around me annoys me after a while. I never understand this being afraid to be alone or walk the shadows. Best times of my life was walking midnight to 5 am in the streets.

@TheWitch pretty much sounds like me my Lilith is in Pisces lol.

already had the impression of feeling some entity, probably feminine … within itself, perhaps subconsciously, as some sort of double-personality that you are aware of?

i have Lilith in 12th house in gemini… but yes, ive felt that too…

Okay, so, @kiss-lamia-lilith @anon27714670 have you two ever thought that this “energy” within you could do something you could not do yourself? as if it were something “strong” that emerges within you, but deep down you knew that you will never be able to let it flow totally?

@TheWitch for me its seems to manifest in the form of knowing things that i shouldn’t know, so psychic stuff, tarot readings, empathy or emapthic readings, touch readings, im usually good at but when Lilith or A deity takes over its goes into overdrive. Also possession work can be really powerful.

As for the not letting flow part sometimes yes because theres this iminant fear that everything in your wake will be destroyed especially when its to do with anger or wrath. So as a cancer that is already water dominant in other planets you have to learn to do slow burns and release your anger gradully or it will be awe inspiring situation like a car crash you don’t want to look but you can look away either lol.

Wanted to update my response here because I learned/experienced new things about having Lilith in the 12th:

I’d like to update this comment/thread more in the future because there’s still so much to learn about BML in one’s chart. Also, hopefully more people could chime in about not only BML but using other hypothetical objects/asteroids astrology-wise.

I got probably a dumb question, but I don’t really know much about the subject other than very general about the houses and how they relate to your natal chart/life but…

How da fck do you figure out you have a spirit in any house, let alone specifically12th? I understand that one relates to spiritual matters I’m just not seeing how the associate is made to which spirits etc.

Lilith is a point in astrology, is not a planet. Is considered as hidden ruler of Scorpio. Its relevance is the house and sign where falls. Aspects considered are actually conjunctions, opositions, parallel and antiparallel but only in certain cases

You can find yours here

What's My Lilith (Black Moon) Sign? Astrologers call Lilith the “dark moon.” In many ways, she is your inner bitch — the part of you that rises up in 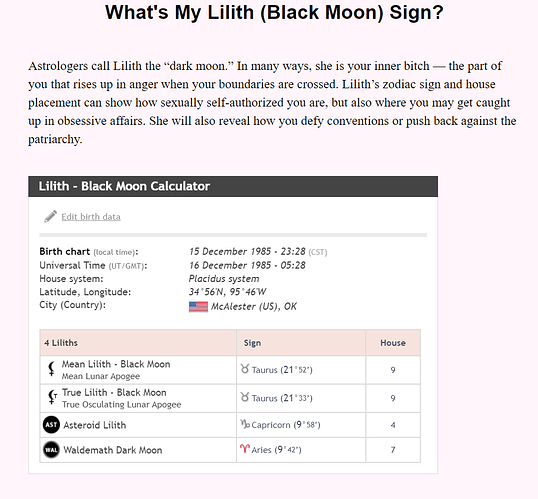 Welp. I don’t know what it means still other than it seems like I gotta whole lot of Lilith’s.

My Mean and True are also in Taurus

For the results you’ll have to google, just keep in mind that astrologers usually talk only about True Black Moon Lilith

Im confused too. AL and TL are in my twelfth house and its ruled by Neptune.

AL and TL are in my twelfth house and its ruled by Neptune.