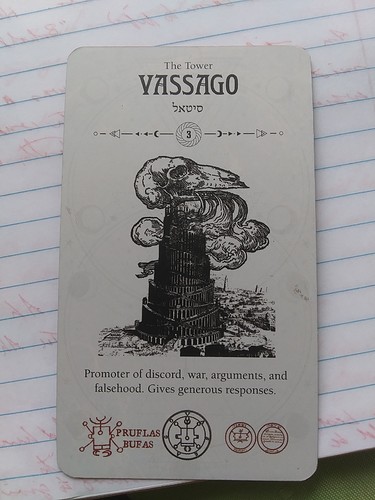 I read the description and felt this was an entiity I’d definitely be interested in calling. I was cooking breakfast (diced Spam and potatoes, with seasoning) and didn’t call him right away.

I brought my bowl of it outside into my ritual space (enclosed porch also used for storage). Vassago came to me as I was eating and asked to come inaide to taste it. After confirming his identity, I let him in. I then read the agreement.

The encounter was strange, but Helios confirmed his identity, so it is what it is.

but Helios confirmed his identity,

How did you confirm his identity? After he came, you called helios then asked Helios if he “vassago” was real?

Yes. If I have questions about who an entity is, I sometimes call on another entity that I do know to verify. I work with a lot of entities that have no sigils, symbols, etc… So, I needed a way to verify who they were.

While I was 99% sure is was Vassago, it is RARE for an entity I haven’t met before to ask to come inside. It’s usually a process and takes time to build up that type of trust on BOTH sides. Since it only takes a minute, there’s a lot more to gain from asking and verifying.

I was laying on my bed, watching Game of Thrones (again), while working on my son’s afghan when I felt Paimon’s call.

(Maybe. I’d felt it early on, bit gpt no positove response to my feeler to him. Instead.of the name of a language, I got the name of a country, whose language I knew the name of, but couldn’t get a response about.)

(He confirmed the country name, which was given as a language (again) and I was told to start listening to it in the background. VERY odd, since he wouldn’t confirm the language name, yet, there is enough media to consume it passively).

(I felt there was more research to be done and that first appearances weren’t the real story. I’m not a linguist by any stretch, but enjoy reading about such things, making it more complicated in my head. I thanked him and can feel his attention now, as I type this.) 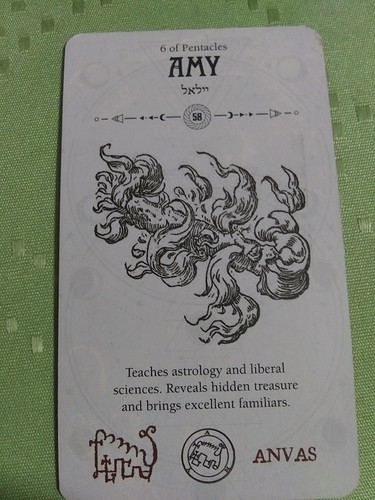 I thought For Sure that I had interacted with Amy already. Yet, I couldn’t find an entry in my notes, nor here. Very well.

He accepted the agreement and immediately gave me my lesson…

"I once had a magician call me and ask for a familiar that they were not ready for. I gave it to them anyhow and it caused trouble for them in hidden ways. Do you know why?

Not only did they not ask for on appropriate to their level, they also didn’t take the time to either ask me or feel it put before using it.

There is your lesson. Dragon’s Blood please (stick)." 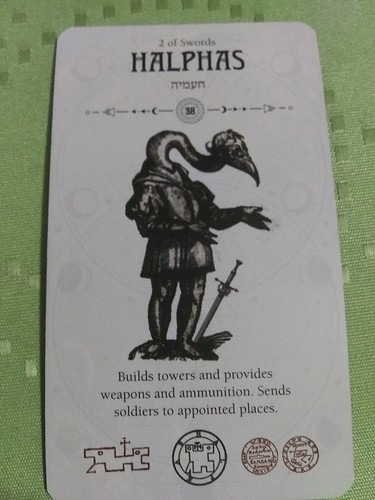 Lord Halphas came quickly. Almost as quickly as Amy, which was near instant (I’d pondered their cards, but nothing I would consider ritual prep outside of attention).

With few words, he agreed. I recognized that he could help a friend and asked that he build a tower of defense for them and we agrees on some blooded incense, since this wasn’t for the lesson or wisdom.

I essentially became their tower for a night and took in all sorts of things as I slept, woke up, and kept dreaming about. I verified it in the morning.

Hadn’t stressed that the attacks should go elsehwere, which he found amusing. Some sleep lost, but not harm done. Keep that in mind and it is NOT his lesson for this thread…

Lord Amon came back to me. I was shown a scene where I was sailing in a warmer, likely tropical (temp wise) climate. I could see the bodies of my companions, but not their faces. I couldn’t recognize any of them. Apparently, something in the future and it’s a voyage from Point A to Point B, a longer, “destination” sail. No other info and I couldn’t tell my age at that point.

Hail Amon and thank you. 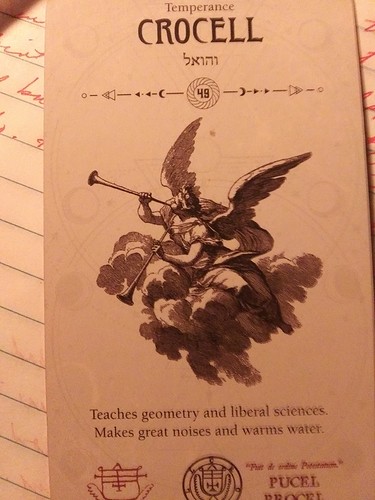 C: "I will teach you (something). Your parallel workings, they’re (pretty) efficient. But, you think of them as parallel. Disconnect them (from your mind), like a cord cutting. You’re worried/concerned with giving each enough power. This shouldn’t be your concern (at this point, beyond that). You can do back-to-back (rituals) without issues. Feed them (as you) do them, let them go. Thanks for the beer.

Hail Crocell. The beer I let him in to taste 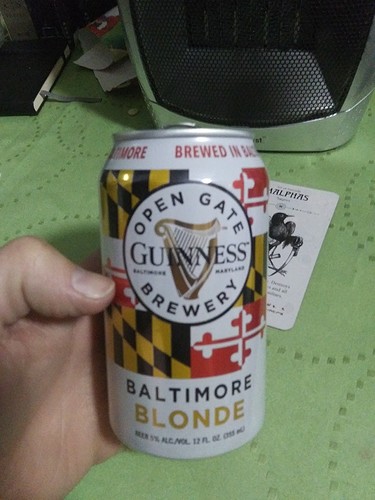 Halphas’ ast lesson was to force me to ground myself (as a tower) to redirect things launched my way. He indicated the lessons were complete. Hail Halphas. 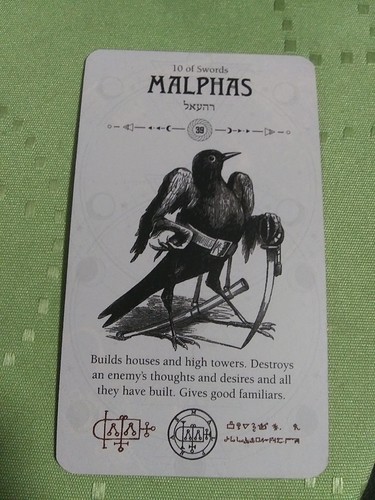 He was done. Hail Malphas. 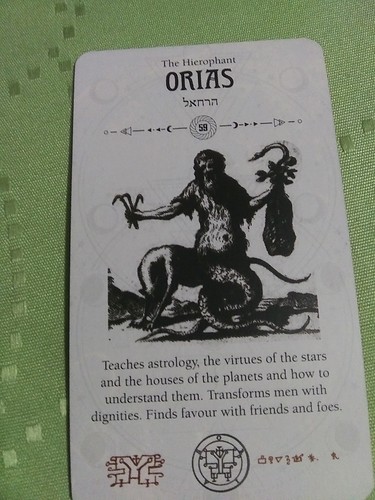 Orias simply accepted the agreement and called it good. 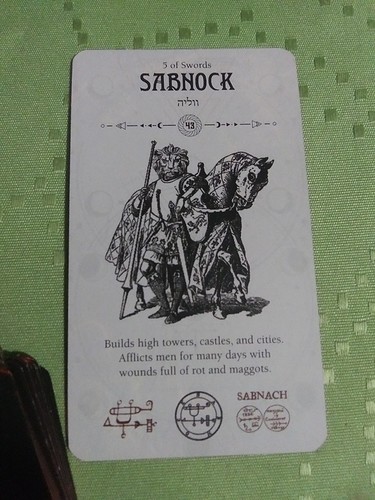 I watched as he called forth maggots and worms from the soil, gathered them in one hand, and flung them towards a target in a triangle. 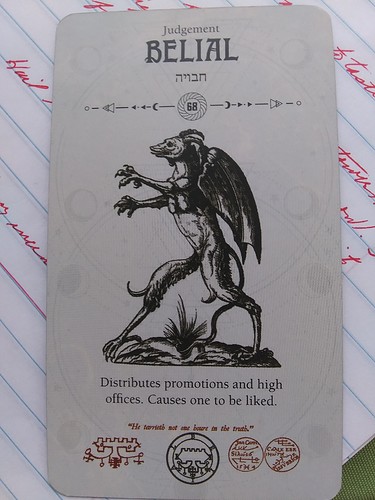 I’d had Belial inside earlier to listen to a song, so there wasn’t a lot of chatter.

Thhe other night, I was a bit inebriated when Vassago returned. I fell for the bait, things were said, and Belial came to diffuse the situation. THEN, I realized Vassago lived up to his reputation. Well played. 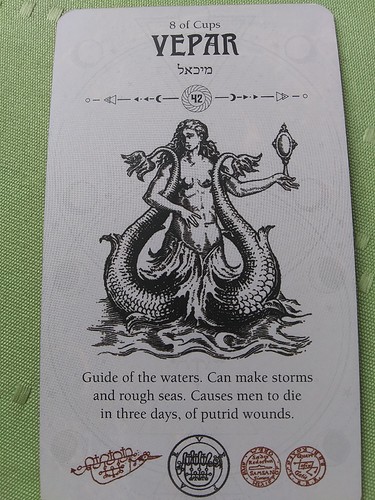 Vepar toyed with me a bit, to see if I would call them more forcefully. I didn’t and simply waited it out. Outside of the agreement, nothing else was said.

Hail Ronove. Instead of the one class opening up, two have. I’ve only been in this position since leaving Hawaii, so getting the supervisor’s go ahead was important. This will actually lay more work at my feet, but could be good for me down the road. 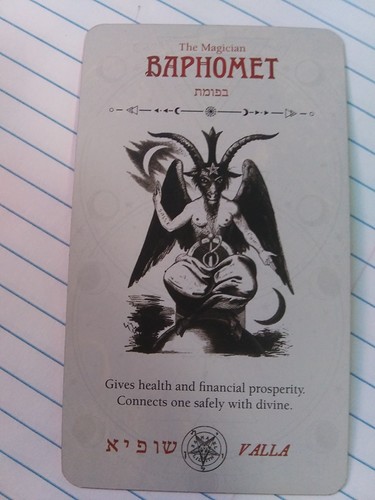 If I’m being honest, I never really thought of Baphomet as anything but a textbook Satanist’s egregore. As soon as so pulled the card, there was a connection.

Baphomet sneered at me a little as I started sending feelers, after drawing the card. I found that sending those put saves me from a wasted evocation and have started doing them after tje second card was put back into the “remaining” deck.

She wanted me to call her a “she”, so I will. If I had been told “he” or whatever else, that’s fine. Doesn’t matter to me, but I do recall debates on it in the past and thought I’d give my experience (for me).

While she was sneering at me, it wasn’t at “me”, but at those aspects she’d like to see improved. I also used the feeler to get the prefered incense and promised to give it to someone else if she didn’t accept. I even blooded it, which also spoke to how I thought this would go.

Eventually, I called her and she came immediately. I was seeing/hearing some sort of snorting and hoof stomping, dragging.

M: “Hail Baphomet.” (She calmed a bit from this)

(As I was reading the agreement, I paused at the part where it says they will not interfere with my longer-term workings. Helios Unbound has been set aside. Did this still apply? “It does”, she said quietly)

(She accepted the agreement. I’d been floating the idea of her coming inside to taste some beer, bit ahe drew back a little at this. That’s fine. We don’t know eachother)

B: “I will give you two lessons. One sensual, one destructive. See them for what they are”

She left at this point.

B: “You did not get the promotion you sought last year.”

B: “You realized why this past week.”

(He did indicate he would assist. The job has been paid for, but not received. And the reason I didn’t get it this year? Because I just switched positions into a new area with new skills required and I would be rated against that next higher position without having the skills to meet a satisfactory rating with the system in use) 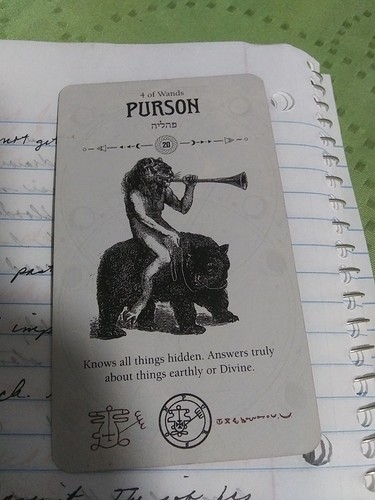 Purson: "I accept. I have watched you, watched this (Lessons of the Deck). I approve.

Let me add some caution. Add an intent disclaimer to not reverse current learnings. That, too, would be a lesson."

He didn’t just mean learning alone here, but everything from insight to progress. 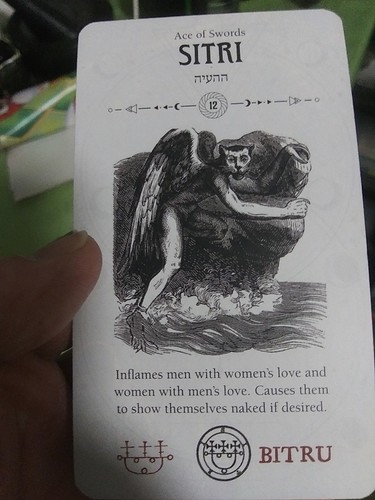 Sitri didn’t say anything, just gestured with his hands. Very animated. I told him I had no idea what he was trying to say. He did indicate that part of me knew, so I watched. It was almost like trying to focus in on every detail in a fast travelling car.

He also imdicated that he can help with 2 aspects of today’s Magical Friends With Benefits group. He wanted a candle labelled to him, wanted an offering on it (blood, since it’s my preferred offering), and he’d take care of the rest.

As I went around to check the doors for the night, I could feel the “nearing” of one of the cards. I wasn’t sure which. The snow and sleet were still coming down and when I got the impression that that moment wasn’t the time, I let it go and went to bed.

I had nightmares all night long. The stuff I take to keep them at bay and sleep as soundly as I can didn’t make a dent. At one point, I got up and checked outside because I dreamt my son was stuck outside, banging on a door to be let in from the cold, with no one to hear him. No little footprints in the snow and he wasn’t in my ritual space.

I did briefly think of it being from watching the Walking Dead (again), but I’ve been doing that for days as I work on his afghan. Game of Thrones before that. This was something different. It also wasn’t an attack by one of the targets I’ve been working on. All of this was thought of between nightmares intense enough to wake me up.

Finally, after 8 hours of them, I felt a presence and recognized it. Vepar. Rough and stormy seas indeed. I was granted an hour of solid sleep after this. Lesson learned.