Hey everyone,
I got a request on information about Michael and I decided to share it, maybe someone else is interested in it too. There are a lot of threads about him, but I didn’t find a good summary of information. If I missed it, I’m sorry. The information I gathered is a mix of books I’ve read, things I’ve heard and my own experience.

First of all, I’d like to rule out a common misconception. You don’t need to follow a religion to call on Michael, or any angel. Yes, they have been linked to the Abrahamic religions. But just like you don’t have to be Asatru and kneel before Odin in order to work with Thor, you don’t have to follow christianity to be able to work with an Archangel. They simply don’t care. In my experience they are much older than Islam, Christianity and Judaism combined.

Also, every Archangel is known to have his “job” , Michael being the warrior, Raphael the doctor, Gabriel the…well he told Mary that she’s pregnant. But just because Michael has proved himself in battle, and Raphael is a skilled healer, it doesn’t mean that they cannot do anything else. Every angel can be called for every purpose, for anything.

Now to Michael.
He is most known as an archangel, but other sources classify him in the order of powers, and then again he is the highest seraph, which would make him the most powerful of all angels. Let’s just agree that he has a lot of titles. Also, his name, which means “Who is like God?” can be interpreted as a hint to the fact that he is like God himself.
I heard alot of theories that Michael was known under a different name before. While that is most likely true, no source knows for certain which name it was, and I don’t know either. Some examples of gods that have been linked to Michael are Marduk, Nusku, Nergal, Ningirsu, Utu, Apollon, Horus, Re, Ra, Helios, Mithra, Jupiter, Anubis, Hel, Thanatos, Apis and many more.

You can see it in two different ways in my opinion. Either the new religion and the angels came and pushed the old gods aside, getting forgotten by the people. Or the spirits changed their name, but you are still dealing with the same energy form (some aspects may have changed, yes). I decide to follow the latter. 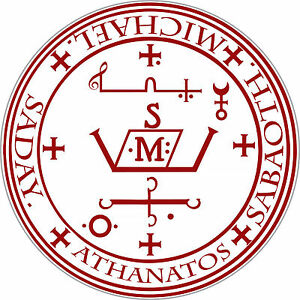 The crosses do not stand for christianity. They stand for 4 elements: omnipotence, omniscience, universal love and universal awareness (it is a bit hard to translate that) These are the four elements that should/will be created. 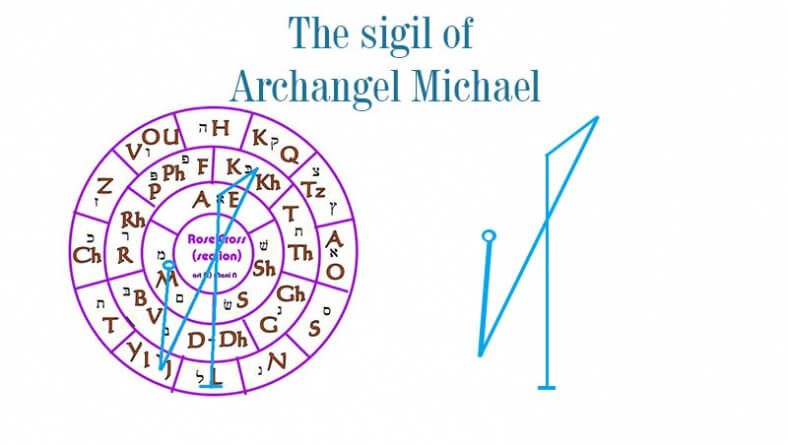 Michael is associated with the sun, examples for materials that can be used are: gold, diamond, ruby, chrysolite, agate, quartz, zircon, jasper and citrine.
I personally think imperial topaz suits him very well. 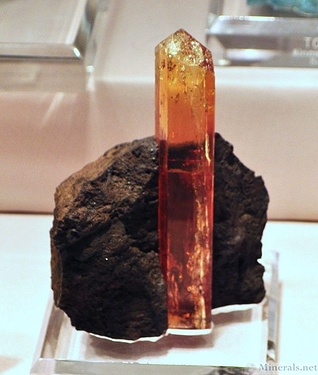 63d71165b671d5d10dcccf7b4520aadb.jpg700×825 71 KB
To me, his presence feels like fire, the burning sun in july, warming body and soul. His light is blue, so are his wings. He has a golden ring around him.
He does not knock on the door gently, he’s more like the person to break the whole wall. Intimidating, yet soothing.

Feel free to add your knowledge and experience!

Very informative, thank you for taking the time to share this!

Awesome thank you for the info!

Feel free to add your knowledge and experience!

Congratulations on your input, glad to receive it!
With this sigil that I contribute, we can invoke it to:

Thanks for sharing this. Mihael is an aspect of Archangel Michael.
Traditionally psalm 98,2 is used to call him:
“Notum fecit Dominus salutare suum, in conspectu revelavit iustitiam suam.” 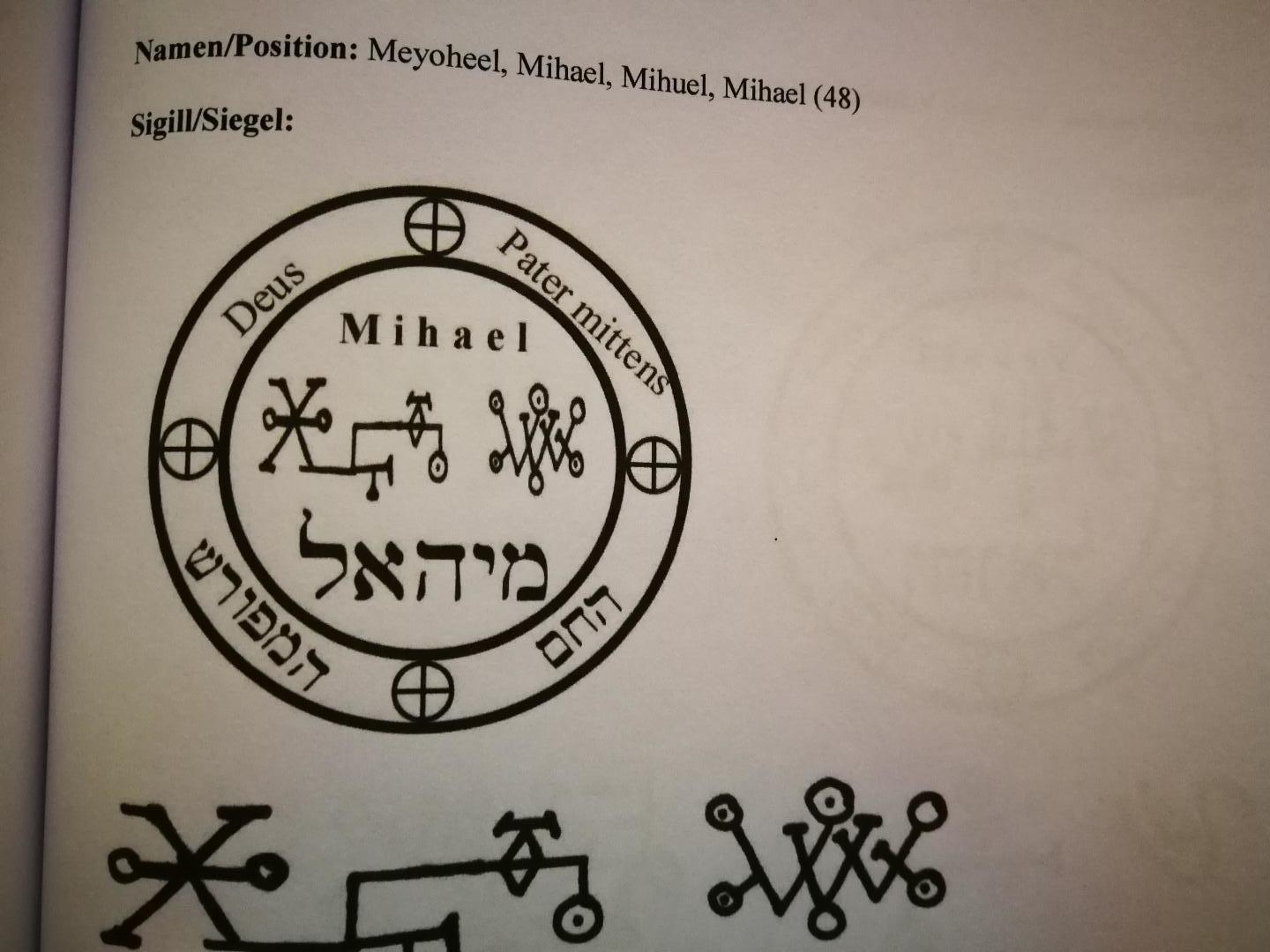 From this book from you got mistaken in his name…it’s should have been wrote “מיכאל” that’s how you write in Hebrew.
And it’s השם המפורש
החם המפורש it’s a mistake also.

That’s Michael. But the picture is about Mihael.

But miss there is no name exists in Hebrew by the name Mihael…the h is in place for the “כ”.
It’s like you say Julio in Spanish but in English it’s sound like hulio. 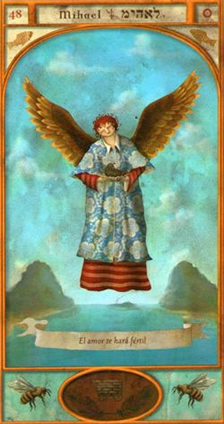 I read about him in several sources.

That example is even worse…I would have sued the translators…
I’m Jewish so I know what I’m talking about.
Frankly I would have taken the book and smash it on the editors head.

Why is the last example even worse?
I don’t know hebrew, so you might be right, yes. But above you see already 3 different sources writing his name like this.

First of all, I’d like to rule out a common misconception. You don’t need to follow a religion to call on Michael, or any angel. Yes, they have been linked to the Abrahamic religions. But just like you don’t have to be Asatru and kneel before Odin in order to work with Thor, you don’t have to follow christianity to be able to work with an Archangel.

This question is relevant, because you seem to neglect the fact that many people on here are trying to escape from the Abrahamic current, and as such they feel no reason to work with any beings associated with that particular current. If it can’t do anything better than any other being, and since it’s a lower level spirit compared to a God, why would I actually want to work with it?

Couse they turned it mirror state and kept the wrong translation…someone translate it wrong,didn’t check to bottom of it and the name left corrupted.
And who ever doing rituals with this name probably doesn’t know why it’s not working…

I disagree with your assumption. I don’t think writing a name incorrectly is going to override one’s intent.

I never said “Hey you should all call upon Michael!” But I’ve seen several people asking “Can I call an angel if I work with demons/ if I’m not a christian?” So I wanted to state that, yes, you can. If you work with an archangel or a demon, that’s a matter of your personal preference.
Many people seem to be interested in him, if you’re not, then just don’t.

The description of this category is “Topics related to gods, demons, angels, evocation, and possession.” So I took the freedom to write about an angel.

archangel or a demon

These are appropriated terms for the Greek Daimons or Roman Daemons.

Secondly, why would you contact this being from a Judaic or Christian paradigm in the first place when it is an appropriated spirit? Your claims regarding it being connected to pre-Christian spirits is thus contradicted by yourself.

Couse they turned it mirror state and kept the wrong translation…someone translate it wrong,didn’t check to bottom of it and the name left corrupted.

You’re right about the mirror state, I see that.
But I doubt that Mihael is the product of a wrong translation, he is known as part of the 72 names of God. I don’t want to discuss them here though, there are several topic about it.

No on the Jewish tradition every letter is important
Couse like in amulets like,mezuzut,the thing we hang on the doors or bible and the rest of the Hebrew stupid bibles if a letter don’t fit the ritual book prayer is will get wrong results…
I don’t go with the abrahamic mysticism but doing this for all those that want to work with Angel’s.

Interesting, and it’s Cause, since it’s a shortened version of Because at the beginning of a sentence. Thought I would enlighten you since, you know:

No on the Jewish tradition every letter is important