So rather than spamming the TMW board, I thought I would make its own thread. I’ve been building a radionics box. Using a number of videos, guides, and such, especially JS Garret’s and Uncle Chucky’s, I’ve laid out what I am fairly certain is functioning psionic device. Well, will be one once I finish it.

I’ve got the potentiameters, the copper wire, plates, crystals, and a few other things. And the box of course. 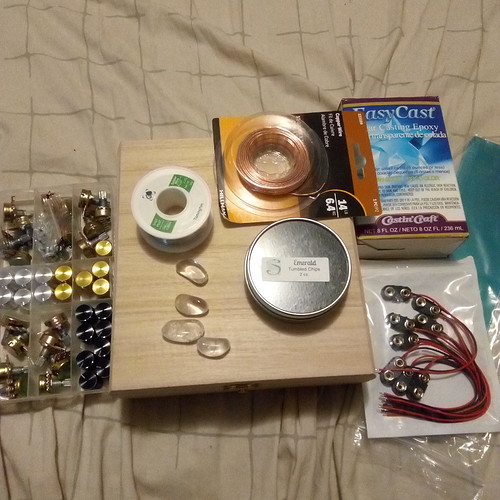 At it’s core is going to be a chunk of orgonite, with copper leads to make a complete circuit. The orgonite itself is composed of a chunk of polished Quartz wrapped in the copper wire that becomes the leads. Emerald chips. Moldavite. A small pentacle. And a mix of Dragons Blood Ink and my own blood. It’s curing as I type this and should be ready by this time tomorrow. 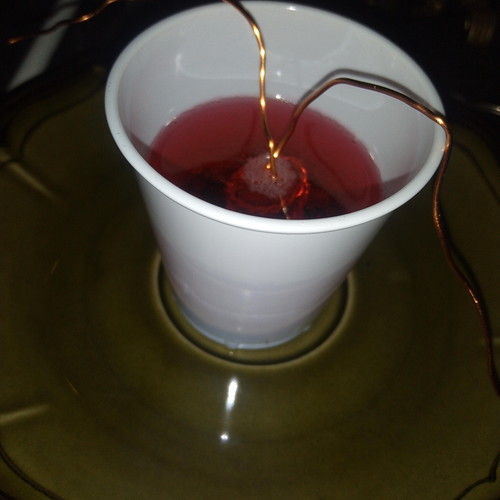 I’ve got the box and such laid out but I am saving those pics for later when it is more completed. But I will update this thread as I go.

My thoughts on Radionics are mixed, but I find it fascinating and enough people are talking about success with it that I had to try it. And building my own box is significantly more affordable than buying one out right. Though I have to say, between materials and time, I can see now why they cost so much prebuilt. It’s quite the process.

This is exciting, I look forward towards your updates.

Orgonite complete. Made a rookie error and forgot to grease my mold first. I worked in marine resin and fiberglass so I really should have known better, but we all make mistakes lol. Thankfully since I just used a disposable plastic cup I used my Dremel to grind it away and then hit it with an acrylic clear coat. Neither of which were needed for function, but I wanted it to look at least somewhat nice. 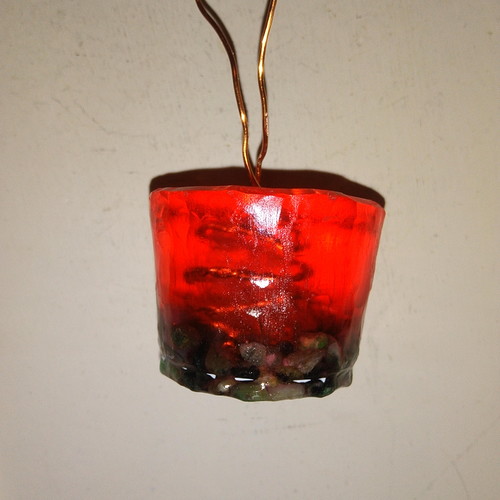 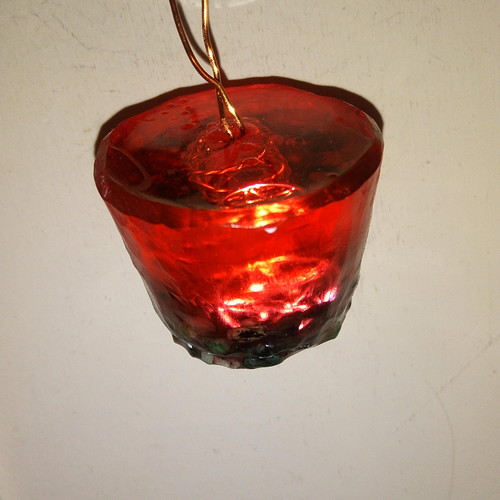 This is a really interesting process. Im not familiar with radionics. Whats the use of this once completed?

My best understanding is that a device like this is a multipurpose tool for Magick. Or as I described it to a friend of mine “The Air Fryer of Occult Ritual”. It can do whatever you want it to do.

By having the dials wired to the input and output plates, and the orgonite core, it can be psychically dialed in, dowsing to adjust the dials, to create the result you want. The adjusting of the box can either supplement or replace ritual.

This is my understanding so far. Though I can confidently say this is an accurate version of it in a nutshell at least.

Got the dials and copper plates put in place. Definitely going for a thicker copper next time, something a little more rigid. Also soldered copper wire to the plates and drilled a hole directly under them to accommodate it. Plates are also being epoxied directly to the box. 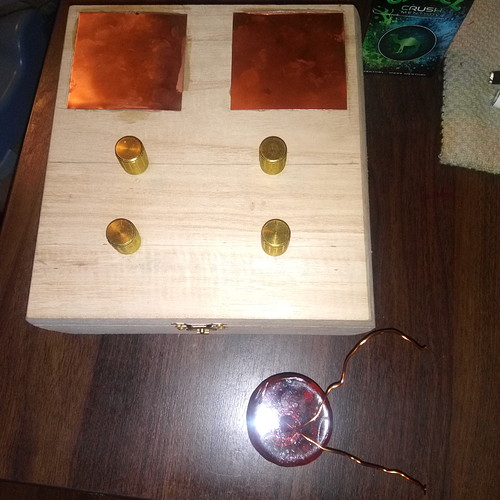 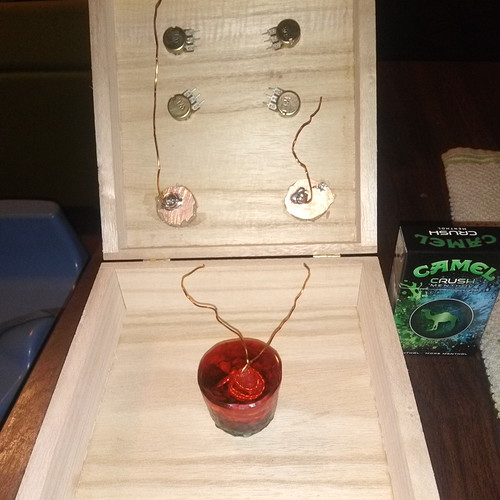 The camel crush pack is a nice touch

lol, I thought about taking them out for a better pic but decided that I might as well leave it for size/scale.

Okay, here’s where it is really getting into unknown territory. I am not entirely sure if there is a specific way these things are supposed to be wired, and my knowledge of electronic wiring pretty much begins and ends with how to splice a severed drop cable. So I purely went with intuition on this, especially with where and how to place the 9v adapter (which is probably all kinds of wrong, if it actually matters at all outside of symbolism)

Secondly I had to epoxy the orgonite to the lid because I didn’t leave myself enough slack in the wire to secure it to the bottom.

The silver lining here is that I actually had a pretty substantial amount of doubt regarding orgonite since it isn’t actually a part of Wilhelm Reich’s original work on Orgone Energy. Imagine my surprise when this chunk of epoxy, metal, and crystal actually started radiating some pretty intense energy on its own. 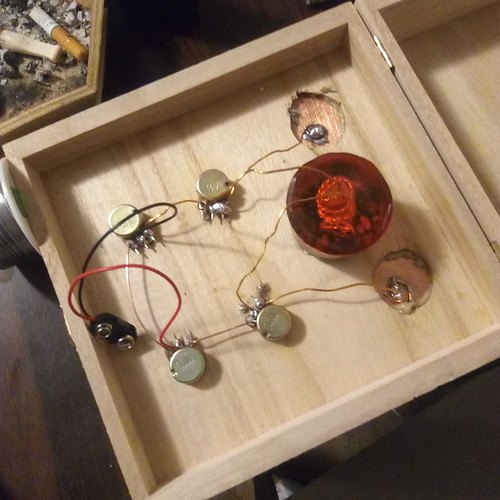 After everything is dry by tomorrow, I will probably be burning the Amanita Sigil in the center of the four dials, tapping into the spirit of the mycelium network of fungi. Then it’s just purely aesthetic work for there.

Can you share where you got the recipe for orgonite, I haven’t come across any yet? I’m hearing that many people sell fake orgonite and that the only was is invented by Karl Welz and is kept secret I think.

Honestly it’s the basic recipe you will find most places that I tweaked a bit. In my case it was 2 part resin epoxy, rough emerald chips, five small chips of moldavite, blood, and a quartz crystal wrapped in copper.

It does have a strong energy. I don’t know if it would do all the things alot of the fanatical orgonite folks say, but I can’t deny it has power.

So while modern orgonite isn’t original to the work, i wouldn’t call it a ripoff since it kinda follows the same principle of layering and compressing natural and artificial materials, specifically with how resin epoxy shrinks and hardens.

Interesting, I’ll research it more.
Keep us posted about your successes with your machine! I’m also getting into it.

There is so much great information the J.D and Black Magick Barbie and Uncle Chucky provide. I’m certain you’ll have success☆☆☆☆☆☆

I am working with an Orgon Chamber made after the original principles of Wilhelm Reich. I also have some Radionics Machines. Interesting idea to combine those principles.

Honestly I can’t comment on those with anything definitive since I haven’t used them. But the chaos magician in me says they could work in some capacity, in the same way a sigil works.

To stay on topic I have built machines similar to the OP. I am keeping an eye on this thread to see how it works out.

As I understand the orgonite in Welz machines are generators. They generate the orgon energy. That is what they say on his sales pages. So the electric is there to run the frequency output.

Testing log: yesterday I decided something simple to officially start the tests. On the input plate I put a dollar bill folded around a piece of pyrite, and on the output I placed a piece of my dragon’s blood paper on which I placed a bit of my own hair and a few drops of blood, then tuned the dials with a pendulum.

Today my lawyer emails me and says they will be speaking with an insurance adjuster regarding payment for my case.

An interesting development. We will see.

I know the Garretts sell wish boxes, which I’ve heard from previous costumers have great results ☆ They also sell radionics machines that have POWERFUL RESULTS. Mr Koetting has been working with radionics as well ( the Garretts have collaborated with the Great Uncle Chucky). I hope that helps, but if there is any confusion or if you would like to see their awesome products, J.S Garrett has his own website.