Help wanted: Can you translate this Arabic script? Mostly solved at bottom

I think we ended up deciding that, and wondered why your friend would blur it, unless it was their name, or they knew who it was lol

I’m not really in a position to evoke anything. Not because I’m in danger but mostly because I’m sort of going through a process right now that I stepped out of my way to do this for

Call him up, see what he says.

I think I will. I still have to do my daily rituals to stay on par for completion, and personal circumstances, may not allow me to have any extra days, I won’t know till my hearing next week so.

I’ll do it in an hour or so and see what I get.

My trouble is I don’t get full on visual or audio with servitors usually. I usually on get vivid impressions and sometimes telepathic communication.

I should be able to discern some from what it feels like, but I might not have clear answer, because then I have to translate the feels into words.

Hmk well. It doesn’t feel as strong as Luna, but she’s been granted a divine soul and protection. Or nearly as strong as Stormy, but she was empowered by tribal gods.

He feels about power wise to me, what would be normal for a newer servitor that hasn’t been in play long. I don’t think he’s reached his full potential and it almost feels like, whoever created him was upset with him for not achieving what they tasked it with- like they were disappointed in him. He almost feels like he got discarded because he didn’t meet expectations. He feels sad.

The first impression I got was off a sad downward trod, almost mechanical looking face. Then It really didn’t seem to like when I called it little fella, and went from a face to a giant towering robot. I’m technically on the fourth floor even though there’s only one step of stairs, and it was taller than my building and looking down into it at me.

As far as what it is for, it feels like it for protection, but not just or mainly physical- it seems to be for emotional protection also. I get strong impression that the person who created it, is struggling to fit in, and make friends or maybe it’s love, but they felt lonely, scared and like they have been betrayed and expect to be betrayed again.

I get strong impressions that the servitor is supposed to help open them up to new things, help them to overcome their fears and sway the people either around them, or targeted by them to do what they want, but doesn’t feel like in a malicious sense, feels more like… To be accepted by whoever the targets are, loved by, cared for things like that.

Pretty I’m sure I’m bat shit crazy so. Someone else might want to give it a go.

The names around the square are 4 archangels Michael Raphael Gabriel and Azrael which is telling me the one who made it is following Al-buni structure.
The servitor name is “Matahya” the names around it are dijins names! The script inside it its purpose or what is his qualities and jobs. The script under it who is it made for and guidelines for the servitor.
I could be wrong on somethings because Al-buni work too complicated to decipher or even follow for me.

Actually it sorta makes sense based on how it feels. I don’t usually get audio from servitors and can’t read the programming from them- just how they feel, and the few brief impressions of itself thst it gave me. i was trying to describe it felt like he was created to protect and help with the creators lacks so abundance and wealth, when taken in terms of what the words mean not simply equating it with money, does somewhat fit.

I don’t get the numbers though, but if you can read the djinn names, I might have information them, I’ve worked with quite a few- would just give further insight on its skills more than likely. Or how they helped to empower it- with what skill sets I mean.

The angels you listed are four of the six I call on when summoning djinn, so that makes sense too.

No that’s okay. I recognize several of the names, though I don’t I’ve seen there meanings of the word like that.

Soaking in the tub, but when I get out- 20/30 minutes from now I’ll see how many I can match

The spellings are kinda out there for the English Ive seen them written in, but glancing at it- I see four I think that I know off hand and I’ll have to look for the others.

I don’t deal with the Arabic named dijins much but I recognise their names!
Good luck searching

Some damned good work in this thread folks-from knowing nothing, with only a picture in a foreign hard to translate for us language to:

The names around the square are 4 archangels Michael Raphael Gabriel and Azrael which is telling me the one who made it is following Al-buni structure.
The servitor name is “Matahya” the names around it are dijins names! The script inside it its purpose or what is his qualities and jobs. The script under it who is it made for and guidelines for the servitor.
I could be wrong on somethings because Al-buni work too complicated to decipher or even follow for me.

All but the two I have questions marks by are djinn Kings as far as I know them. 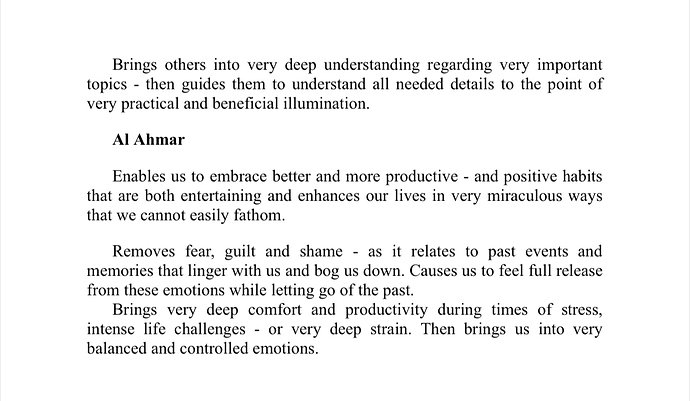 To I present you:

I don’t have it’s skills, but I know they used 4/6 angels I use in summoning the djinn during construction, likely because it’s believed the angels constrain the djinn. I would assume the servitor was to learn it’s skills so that it could be tasked from abundance and wealth from the djinn kings/the two djinn I don’t know about.

So this servitor should be good for aid with:

It’s got a good foundation, and servitors take time. I won’t promise it’s safe- because I have no idea what it’s energy source is.

BUT if you look at what I just shared after we found out which djinn it was made with, it aligns with what I felt when I evoked it= we have a match from the servitor that appeared to me, to the programming sheet. I would honestly expect based on the feel of the servitor, that the two djinn I haven’t worked with probably deal with protection, but I can’t confirm that, I’m not sure if I got name matches or not.

I was browsing the forum and saw this, kudos for people trying to decipher it, I showed it to a friend who speaks arabic fluently and practices magic, he said it’s a money spell involving the 7 jinn kings, it probably was supposed to be burried or hung somewhere, blessings

Maybe that’s what it originally was, (A money spell) but at least two of us found a spirit attached to it, one of them is not in this thread, so you can’t read their post as it’s not available to you. He told me it felt like it dealt with protection and persuasion/manipulation type things. Which fits with my analysis, and I’m sure someone else will come along and summon it eventually and we can keep comparing notes

If you intend stick around please start a new topic and introduce yourself, or go here and do so:

From what book you found those names in? And what books you work with dijins?

Several. They are all but the two I question marked- in Corwin Hargrove’s Practical Djinn magic, but I took the descriptions from my other books- Donald Johnsons Djinn Rulers Sorcery and Djinn Magick, as Hargrove doesn’t give descriptions, he only tells you what rituals they are good for. Both of these books have other Djinn as well, I just cropped to their names so as not to be putting toooooo much of an authors work on here.

Ok thanks! More stuff for me to read

No problem, I should have stated that above, I was going to type it all out then figured it made more sense to give the sources so you’d know I wasn’t blow smoke up ya ass lmao.

Welcome @Green It is a rule of this forum for all new members to properly introduce themselves, so PLEASE CLICK ON THE IMAGE BELOW and tell us about yourself and any experience you may have in magick, such as what you practice, how long you have practiced, areas of interest, etc:

This seems like a healing talisman for someone because there are healing verses on the body. It represents the patient. And on the right, there’s another different talisman containing names of angels such as jibril or gabriel.