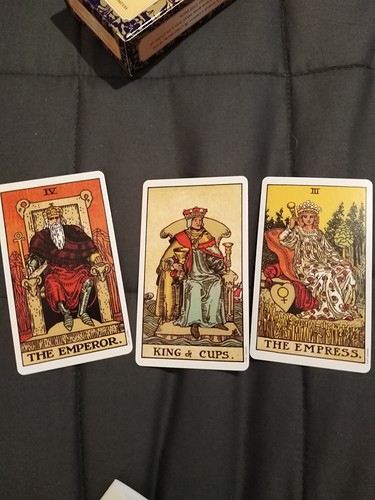 Welcome @Empresskat_Lucas It is a rule of this forum for all new members to properly introduce themselves, so PLEASE CLICK ON THE IMAGE BELOW and tell us about yourself and any experience you may have in magick, such as what you practice, how long you have practiced, areas of interest, etc:

Depends on what the positions of your cards represent to you… Is this a Past-Present-Future spread or something else?
On the surface it looks like the cards are pointing out that you are in a strong position, all major arcana all uprights is usually favourable. If you’re in a strong position why would you give up?
Or, did you just not shuffle the deck so there are no reversed cards?

I assume you’ve read the booklet that came with that cards, or looked up tutorials online? LIke this one: https://tarotoak.com/how-to-start-reading-tarot-cards-a-guide-for-beginners/
So where are you stuck?

I did shuffle these 3 fell out as I say I’m very new to it and it’s a basic booklet that came with the cards.

I started with the major arcana, then added the minor arcana when I had a feel for it. I would pull one card a day. After about 8 weeks of pulling one major arcana card, I could guess 3 cards and it would be one of them. (When out of state visiting friends/family, I pulled the Lovers card 3 days in a row. It made sense but freaked me out a little bit because the odds of that are around 5%.) I don’t read reversals to keep it simple. I keep all the cards in the same direction. If one is placed in the deck accidentally upside down, I will read it as a reversal but it’s rare. I used Biddy Tarot’s site to learn their meanings. Keep at it! It’s frustrating at first but then it’s fun and you can get addicted. Some people have dozens of decks.

I haven’t quite memorized what every card means. However, I’m pretty sure that this is the Past, Present, and Future formation. So my advice is to research the meaning of each card and work from there. Hope this helps.