Hell hounds what really are they and can they really be summoned ? advice

You can. But in my case, I asked Hecate for permission first. Not sure if it’s a prerequisite.

Yes you can summon them. Generally they are archetypes limited by your own imagination / mind. However, you can also summon the actual hell hounds through ritual. I’ve never personally done it but I have heard of people using them in assistance with speeding up spells.

what kind of ritual ?

West Dragon Ritual. I’m honestly only an energy worker though so I don’t know much about magick or the rituals themselves. I usually get invited to help with the energy in the room staying focused. 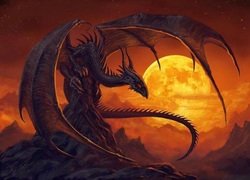 Understanding the History of Dragons within the Draconic Wicca Tradition

thank you this will be very handy

For sure. Hope it helps.

I know the person who was really knowledgeable about the dragon magick as they called it drew / painted a lot of images of dragons and lined them with gold a lot. Not sure if it was for “sacrifice” or “offering” purposes but it was definitely interesting to see their artwork sometimes.

Thanks for the point in the right direction.

Another post on here led to this, and it seems “Hellhound” is more like a corruption of older pagan lore,

… which explains the hellfire bits. So the whole sulfur bit probably isn’t authentic, having been made up by a xtian preist who has no personal gnosis of such things, and may not be seen in personal experiences if you’re not very JCI-influenced…

In Welsh mythology and folklore, Cŵn Annwn (Welsh pronunciation: [kuːn ˈanʊn], "hounds of Annwn") were the spectral hounds of Annwn, the otherworld of Welsh myth. They were associated with a form of the Wild Hunt, presided over by either Arawn, king of Annwn in the First Branch of the Mabinogi and alluded to in the Fourth, or by Gwyn ap Nudd as the underworld king and king of the fair(y) folk is named in later medieval lore. In Wales, they were associated with migrating geese, supposedly because...

This particularly interests me:

“A Cŵn Annwn’s goal in the Wild Hunt is to hunt wrongdoers into the ground until they can run no longer, just as the criminals did to their victims.”

And Christmas day (which is still is for me today) through 12th night [of christmas] is when Arawn goes hunting with them - maybe they’ll be busy, or maybe it’s a good time to borrow one? "

Arawn, king of Ännwn, is believed to set the Cŵn Annwn loose to hunt mundane creatures.

At the least Arawn would be the god to ask if he can lend you a Cwn Annwn, and as their keeper should be able to teach you about them. (“Kun A-noon”). Hermes the Hunter who has similar otherworld dogs might be also.

This should be in the myths and legends category.

From Wikipedia: A hellhound is a supernatural dog in folklore. A wide variety of ominous or hellish supernatural dogs occur in mythologies around the world. Features that have been attributed to hellhounds include mangled black fur, glowing red eyes, super strength and speed, ghostly or phantom characteristics, and a foul odor. Wikipedia

There is no such category here as 'Myths and Legends", and, not really, no.

Black dogs remain a current paranormal phenomenon. My own mother saw one, a story which I posted here not 3 months ago.

When i say myths and legends catigory i am being dubious and sarcastic. I am not inferring it is a category on the forum, obviously.

@Maulbeere you seem to contradict yourself several times in your post regarding Hell Hounds starting nine days ago you stated:

“Another post on here led to this, and it seems “Hellhound” is more like a corruption of older pagan lore, … which explains the hellfire bits. So the whole sulfur bit probably isn’t authentic, having been made up by a xtian preist…”

I stand by my post and quote and link from Wikipedia hell hounds are a work of fiction which is well documented.