Has anyone ever worked with her?

I get the feeling she could be vampiric?

The Thugee were worshipers of Kali and they would wear a silk sash with a large coin tied to one end. They would use this coin as a means to whip the sash around the neck of their victims and strangle them to death. The reason for strangulation was to save the blood for Kali Mah or the black Kali. The victims were often travelers on roads and the Thugee would ambush these travelers and raid the caravans. Now this story is in all honesty probably more a manufacturing of British imagination as in reality most Thugee captured by British military were actually muslem.

Vampiric? How do you mean?

Even I don’t know. We worship her daily basis.

Its because she drank the blood of the demon she slew. Every drop that escaped became a replica of the demon, so she had devour every drop of the demons essence in order to vanquish it completely.

Yeah I know but I thought the implication was that Kali drains energy of the participant.

vampiric in the sense that she can teach psychic vampirism

Kali drains energy of the participant.

She can take on a form as Time, which does devour all things, turning the young and strong into the old and feeble, the brave into the defeated, the living into the dead, and forgotten… nothing devours as remorselessly as this!

I don’t know what Arianna meant, I would’ve pointed out that Kali is vitalizing not vampirizing. I’ve never ritualistically evoked Her but I know about Her.

On the subject of Kali, She needs to rise and take back the shit-tip backward shit-hole that is India i.e. where women and little girls of all classes are basically oppressed slaves and worse.

I was just thinking she drank blood. So it seemed vampiric.

But i agree with you last paragraph.

There is a book on Amazon called Kali Mah which i purchase last year it is really dark there are the dark mantras of the Kali Mah which the book warning on pronunciation of the Hindu words correctly or Kali Mah will bring destruction upon the user some are easy to chant than others.

I believe Kali teaches one lessons about life and encourages them to have power and endurance to go through any pain and suffering, Kali also puts the person on a path to remove fear, ego and arrogance and of course her dark energy is a great element for destruction.

Hi Guys and Gals, apologies for raising an old thread. Just wanted to share some insight into Goddess Kali, my beloved Mother.

Kali is the darkest form that the Supreme Goddess Parvati takes on, in order to maintain balance within creation. It is a darkness beyond the point where any consciousness exists. She is raw energy, which is why tantrics actively work with her. Ma Kali, herself, takes on various forms, each with its own purpose and levels of intensity. Examples being, Veer Kali, Samshan Kali, and Badra Kali being the most intense. In these forms she destroys all types of evil. That which concerns us the most is ignorance and arrogance. Yes, she teaches lessons.

The drinking of blood or blood sacrifices is a common misconception when it comes to Goddess Kali. As someone stated above, Goddess Kali was battling a demon by the name of Raktabija. He had been given a boon that whenever a single drop of his blood fell to the ground another clone of his would spring up. In order to prevent this from happening, the Goddess began collecting his blood into a bowl as she was slaying him. To prevent the bowl from filling and overflowing, she drank the blood. This was her only means of killing him.

In reality, she is an ever loving mother, Shakti in it’s purest and rawest form. She is the divine feminine aspect of Sadashiva - Supreme being in Sanatan Dharma, which is the religion in hinduism.

Feel free to ask me anything you’d like about her.

Have you evoked her? If yes, can you share your experience?

I haven’t had the need to evoke her. She has been with me since birth. I am her son. She guides all facets of my life. She also named me. I do communicate with her. She is both omnipresent and omnipotent. All one needs to do is call out to her, and know she is present. If you would like to perform a ritual, then find yourself some camphor, light a small piece and recite "Om Shree Maha Kali Mata Ye Namah"3 times. You could even call out Goddess Kali 3 times. That will be enough. This is something she told me herself. This is the most simple way to connect with her.

Something that just popped into my mind now, which I believe is coming from her. She is raw, potent energy, however, no one should use this for chaos, revenge, cursing, or infringing on anyone’s free will. Yes, you maybe granted what you seek, however, she will also deliver to you your due karmic consequence. And when she delivers this lesson, it’s not a pretty sight.

And for those who fear her…all I can share is my experiences of the tremendous love that pours into my heart when I think of her. She is a loving mother. She protects me. When I connect with her energies and she showers her motherly love over me, I’m reduced to tears. 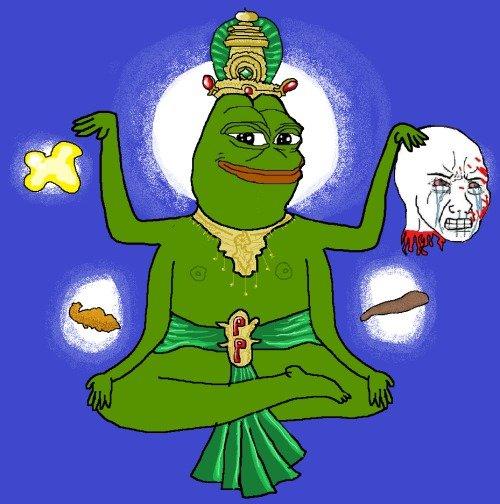 She can take on a form as Time, which does devour all things, turning the young and strong into the old and feeble, the brave into the defeated, the living into the dead, and forgotten… nothing devours as remorselessly as this!

Is there a way, that she could make you live longer?

I cannot answer, because I never worked with her on that, direct questioning may be best there.

There is a book on Amazon called Kali Mah which i purchase last year it is really dark there are the dark mantras of the Kali Mah which the book warning on pronunciation of the Hindu words correctly or Kali Mah will bring destruction upon the user some are easy to chant than others.

You mean, that those mantra are actually harmfull??

In these forms she destroys all types of evil

she will also deliver to you your due karmic consequence.

oh gods, not this again.