Experience with Pazuzu the storm God

As I browse to the forum I cannot find much of the Storm God Pazuzu.
I’ve hear that he protects people from beings with a bad intend.

Does anybody have experience with him?

I have only 1 experience with him. He came to me in a dream and hugged me. I never did any extensive work with him but he is very nurturing

Yes you don’t hear from him al lot on this forum and he seems to be very powerful when I read about him.

Babylonian demonology theres a few books out there. Michael w fords muskim hul & sebetti are a good place to start you research.

Thank you @kiss-lamia-Lilith, I watched some videos of Michael W. Ford. Good to know which direction I must go

No worries also look up babylonian demons and gods online there will be academic research and books too.

Pazuzu is a good demon to call for all most any kind of curse, he’s especially efficient at destroying peoples material prosperity and takes a great deal of glee in doing it. And He’ll always attack people for free.

He can be a protector as well, if your being attacked by other spirits, you’ll need to make offerings to him before he’ll be willing to do it and they can vary from person to person or even from day to day so use a form of divination your good at to find out what that might be so as to avoid the bitch fits.

If Pazuzu was human i’d say he’d be bipolar, very nice one minute a total raging psychopath the next, in that some may find him difficult to work with but it’s just his nature to be chaotic. So it’s probably best to work with him for a stated goal and time and when it’s done thank him and very politely kick his ass out the door, the longer his presence is allowed to linger anywhere for to long all kinds of havoc comes with it, again just his nature.

This has been my experience with him.

Thank you for this information. How do you call him? Just meditate on his name, his statue for example or do you have a sigil, sign? And where do I find more info about him (book or article)? Because mostly you see the exorcist link which is utterly bullshit (maybe not story itself, but they dragged the God in that movie). That causes for a whole lot of negative articles about him but not the articles you want to read. So it’s hard to find something. I find the protection part interesting but I see on your writing that the relationship is equal and not worship (you read that to about people to who worship him).

Last but not least I think in this case divination is scrying or ask him to put something in your head, because he decides the offering. And he is not for beginners I conclude.

And @kiss-lamia-Lilith was right when I look at Babylonian and Assyrian than I find more info.

Pazuzu and Lamashtu seem to be underworld versions of Enlil & Ninlil. Enlil is banished there after he seduces Ninlil when she is too young. Ninlil goes looking for him. So it seems they were demonised over time for being banished from the godly world. Pazuzu is an Assyrian/Babylonian demonic god who was most popular in the first millenium BCE. He was the son of Hanbi (also Hanba), king of the demons of the underworld, and brother to Humbaba, the...

They where banished alright from the Godly world by Christians. And I still think it’s more a human thing than entities not working together anymore. Enki used them to manage population in agreement with Enlil but they protected humans to.

Pazuzu is a weird one he seems to not like attention at least that’s what I get from him, hell even anthology 2 I think It is has one page about him and it’s only a picture.

How do you call him? Just meditate on his name, his statue for example or do you have a sigil, sign? 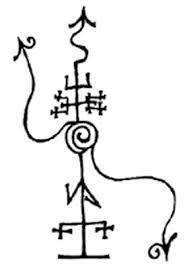 I call him with a basic evocation using this sigil, incense, candles, magick circle et cetera. The sigil is from the Simon Necronomicon, a lot of people think very poorly of that book because of the name but it is a real Grimoire, you can work it and get very good results from it.

And where do I find more info about him (book or article)?

Always look into the mythology first as kiss-lamia-lilith has said.

And he is not for beginners I conclude.

Probably so, but everyone who wants to become good at summoning spirits has to pop their cherry with one at some point and if they can handle calling up and working with one of the most ancient Devils known to mankind then they can deal with anything.

Pazuzu and Lamashtu seem to be underworld versions of Enlil & Ninlil. Enlil is banished there after he seduces Ninlil when she is too young. Ninlil goes looking for him. So it seems they were demonised over time for being banished from the godly world.

Is that why he and Lilith seem to have such a weird ass love/hate relationship? Interesting.

That is what my research seems to correlate x

And thank you very much @kiss-lamia-Lilith, thanks to you both I have enough info to start with!

Firstly, while I don’t have extensive experience with Pazuzu compared to a number of other spirits, I have at times felt an oddly curious draw thereunto which basically led to a few solid “meet and greet” encounters I’d felt satisfied with according to the relevance of what I was shown overall.

In the end I was left fairly surprised. Going in I initially wondered if my preconceptions that he may be as bad as he’s been made out to sound could be true, and after suspending disbelief, found maybe in some regards the hype was correct. Pazuzu was, to me, quite a neutral force, however. He didn’t seem to care who he hurt or healed, but merely acted as a massive force manifesting in our plane. He wasn’t (necessarily) out to devour me and everyone alive with pestilence, storms and so forth. Pestilence and the rest merely are. And must be. Although despite feeling relatively at ease in his presence, a subtle threat to my safety lingered, and much like in work with Lilith.

Given the observation of his detachment from results, Pazuzu seems a potential great ally, but also to be a spirit one would not want to carelessly anger to say the least; a bit like Belial in the sense of having the potential to be harsh when you make mistakes. I couldn’t easily recommend this spirit to a beginner at evocation. At all.

For something different in closing; for something of a PS to the curious: I’d gotten the strong intuitive sense that a consecrated rattlesnake tail ritual implement could be of use in calling him down if not used as a simple offering instead.

@leo , thanks for your experience. That’s why i’m a bit cautious because there isn’t much positive articles about him unfortunately. That makes it hard to go in without hesitation.

I see you new. Please introduce yourself here: Hi my name is Kenneth I'm fairly new magick, I'm only really good at candle magick so far and I have been trying to branch off to other forms of magick.I've been trying astral projection but I'm have some problems with. I got into magick when my...

@Borgy even though it may not appear positive you will find out when seen through a different perspective that positive aspects are hidden in there. That why i never try to look for good or evil but rather what knowledge can i gain.

I think I must experience it. Let’s see. I did two evocations now and I’m reading a lot for the next one. And when it goes better (because every time you learn) I will go and have a look at the darker aspects (which I already do but then a light/dark aspect all together