One of my petitions to Duchess Bune came to pass. Funny thing is that the petition was not even for me. It was to help a family member land a new job.

After I had did my initial petition, my family member started to receive job interviews left and right. Some were promising, some were not, but it showed me that Duchess Bune was indeed working.

After a few weeks, out of the blue, I received a brief image of Duchess Bune. Same image that I usually get from her, just a brief picture of her from the shoulders up, although this time, she was wearing a blue top. Later on, I was talking with my family member and she told me that she had received 2 job offers pending standard background checks. So maybe Duchess Bune was giving me a heads up that my petition was about ready to happen.

I called upon Duchess Bune and asked her if that was her showing me an image of her. She stated yes. I asked her if the petition was ready to come to pass. She answered yes. I stated that as soon as the background checks came through and a job was excepted I would have my payment ready for her as agreed upon.

A couple of days later, the background checks came through and a job was excepted. I then called upon Duchess Bune and gave her my payment. While this was happening, I got the thought of a pact in my mind. I asked Duchess Bune if she had put that thought in my head. She stated yes. I asked her if she was interested in a having a pact with me. She answered yes. I told her that I’m interested also, but I need to think about what to ask for, how to write it up, what I would offer, etc… She was agreeable to this.

I think a pact with Duchess Bune could be a wonderful thing, but I’m going to really make sure that i do it right. I have never done a pact before and I feel that having a pact with an entity is very serious. It shows commitment from the entity and from myself. I’m really looking froward to it. So that is my new experience with the Duchess.

Duchess Bune, I know that you are reading this, so I just want to publicly thank you again for your help and I look forward to keep building my relationship with you.

Another petition to Duchess Bune came to pass. This one was the same as the previous one; to help a different family member receive a new job. Unlike the previous petition, this one took a little longer to manifest.

After my petition to the Duchess, my family member was receiving some job interviews, but nothing was coming from it. They were promising, but no concrete job offer. I went back and looked at what I wrote for the petition (I write down what I ask for in a petition so that I can go back and see exactly how it was asked) and realized what had happened. I forgot to put a time frame on it.

Moral of the story is this. When doing a petition to a spirit, put in a time frame. It makes a world of difference.

Duchess Bune as always you have my sincere love and gratitude. Thank you for all that you do.

I called upon Duchess Bune and asked her if that was her showing me an image of her. She stated yes. I asked her if the petition was ready to come to pass. She answered yes.

Were you talking to her through the 4 penny divination method ?

Were you talking to her through the 4 penny divination method ?

Yes, although now I’m getting to where I can somewhat hear her when she speaks, maybe 75-80% accurate. Sometimes I have to use the pennies to double check to see if it was indeed her or self talk. Sometimes I can faintly hear her voice or words may just pop into my head or she even puts songs into my head such as if I ask her a question, all of a sudden a certain part of a song will pop into my head which will correspond to my question.

Sometimes I can faintly hear her voice or words may just pop into my head or she even puts songs into my head such as if I ask her a question, all of a sudden a certain part of a song will pop into my head which will correspond to my question.

This seems to be a possible part of the process of the senses opening ive seen this in part or as a whole paraphrased in other posts while digging around.

Are you doing divination for others or no?

It was Duchess Bune. I have never worked with Gremory, but if she is anything like Duchess Bune, then she would be great to work with.

Are you doing divination for others or no?

No, I am still working out the kinks in doing divination for myself. It is a work in progress, but it’s getting there. 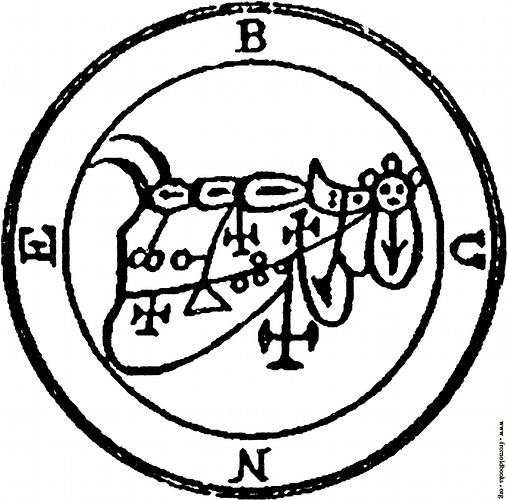 In demonology, Buné is a Great Duke of Hell, mighty and strong, who has thirty legions of demons under his command. He changes the place of the dead and makes them demons that are under his power to gather together upon those sepulchres. Buné makes men eloquent and wise, and gives true answers to their demands and also richness. He speaks with a deep voice. Buné is depicted as a three-headed dragon, being his heads like those of a dog, a griffin, and a man (although according to some grimoires...

Yeah, except every spirit can come in any form they want, especially considering how most of Goetia spirits were ancient gods that got completely modified and demonized, including their gender, abilities, forms, and so on.

Furthermore, every spirit has their dark and light sides, their feminine and masculine sides, just as we do, except since they are on the astral, it’s much more fluid, and they can change their form to represent this.

And to top it off, Bune has been appearing as a woman to a lot of people, so that is why people call her Duchess.

These entities appear in whatever form is most applicable to whomever they are dealing with.

For example - for some people Duke Dantalion is a single entity whereas for me I have the Duke Dantalion Call Centre and receive a different sounding voice every single time. Yes it is the same entity but please take a look at the classic image of the Duke and see how this may be the case.

The ritual always runs the same way so there is no doubt that I am dealing with one entity.

I don’t ask any entity (by that I mean Goetic, Dukante or Koetting Gods) to appear - I know they are there; they have nothing to prove to me and I had a discussion with the great Duke Dantalion this morning about how rituals have changed from ones where they’ve been expected to perform like dancing bears for the magus to active helpers - and they much prefer the latter.

There are no hard and fast rules - if you are respectful and open minded - a Duke can be a Duchess, a King a Queen, it’s to do with hierarchy and it isn’t as you imagine. There is always something to learn.

I can only speak from my experiences with her, but Duchess Bune has always appeared to me as a woman.

I never said it was a guy, but if people do not keep any consistency with tradition then misinformation is spread and why don’t you just call the goetia pizza? I understand the spirit does not come in the same picture as in the goetia, I have had that experience too. But calling everything whatever you want can destroy a whole system, its so post modern, but do what you want I was not attacking you. From a trans attack helicopter

If it offends your sensibilities or that of the entity so greatly, then ask what its correct title is.

but if people do not keep any consistency with tradition

If you dig into some of the work others have done with these spirits you’ll find consistency with them, with the “tradition” not so much as the traditional method of the text includes attempting to bind and threaten these spirits. Which most would not end well to say the least.

Consistency with “tradition” is overrated, an exception being if there are constant result of using said title. One of the only spirits i have heard is particular about this is king paimon.

If they are getting beneficial results then that is what matter.
Take what works adapt it leave the rest.

I agree, with results. It was just my opinion

I have the demons book of magic what page is the penny ritual on?

Do you people think Bune is appropriate spirit for stock market and forex?