Well this evocation went along a bit differently than normal. Had his name in my head a couple times throughout the day and as chance would have it I had to go for a walk to my special pond forest place in the isolated corner of the local park. It is so special because in it is a portal to the first qliphothic realm. I had to make the visit to dump some ashes into the pond to release their energy into those realms for the spells the ashes had come from.

Along the way the sky was a nice red from the setting sun reflecting off the clouds and very still and quiet as I walked through the town to the park. It was really kind of an eerie and beautiful walk. Once in the park lying in the grass I found basically a wooden scepter that really called to me so I took it along since I do often find random things with some magical value to me on these outings. Got to the pond and found a nice spot and with the sudden urge I had I stabbed the scepter to stand in the mud and scattered the ashes into the water with some words.

Next thing I know I calling to Bael with barbarous incantations of some spur on the moment enn that will likely only change with each repetition. The pond got this static intense look and I could tell he was there but I couldn’t see him at first even though I could hear him confirm his presence. After a minute I could make out his form appearing to me. He told me how was lord of many things in the infernal realms even the shadows though they weren’t his preferred realm. His seemed to lie in illusion covering the use of power. Not illusion through shadows necessarily. He asked if I was still intent on my path and I confirmed I was and would learn from his power and so he said he would bless my new scepter with his power and as I held it out to him he gave it a bolt of energy to it and told me he left a gift on the other side of the pond.

I walked around and there was a realization as I observed the trees. One that is more for me alone but there is a certain satisfaction and joy in certain tasks even if otherwise pointless was one part of it. The other part related to my other paths I am progressing. 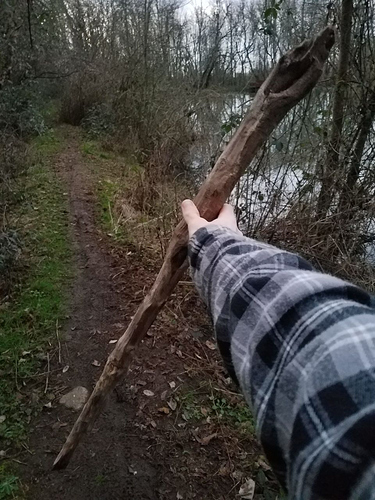 I love it when I get new magical artifacts as I call them! Bael does seem fun to work with along with my current practices from what he showed me at the end.

Let ze epicness flow though you!!