I Studied Taoism and followed the way of the Tao for years before I adopted to the philosophical principals of Buddhism.

Lao Tzu’s Teachings have helped me, beyond measure, in learning stillness, disipline and having No thought which equates to no judgment which in turn negates duality.

Essentially Taoism and Buddism are almost one in the same as far as conceptual thinking go, with the theory and application of principals being the obvious difference.

Along with Confucianism, these three, make up Neo-Confucianism. All three being so very similar in their teachings that some have opted to combine these three religious philosophies into one.

But moving right along we circle back to Taoism. I always loved the idea of balancing forces. The

symbol is a very accurate representation of the dualistic nature of reality. Two equal and opposite forces. One, being immovable (usually me, lol), the other unstoppable. And the balancing dance of the two, form existence as we know it. But that was not enough for me. I wanted to know what lies beyond the veil…

Every word is like an unnecessary stain on silence and nothingness.
-Samuel Beckett

From Nothing we came and to nothing we will return. Once I embraced, and understood this there was nothing left for me to know. And I could easily become the silent non-judging witnesser of, not only my own ego but of all of existence, which I now know myself to be.

I use to be a Buddhist…now I lean towards misanthropy and have nihilist views. But that is just me. I became a little God of Misanthropic Nihilism.

But as far as magick goes? I used Feng Shui as a way to incorporate my Buddhist beliefs into my magickal practice. But that, is another thread.

Yup Mulan. But truth is thuth is truth. 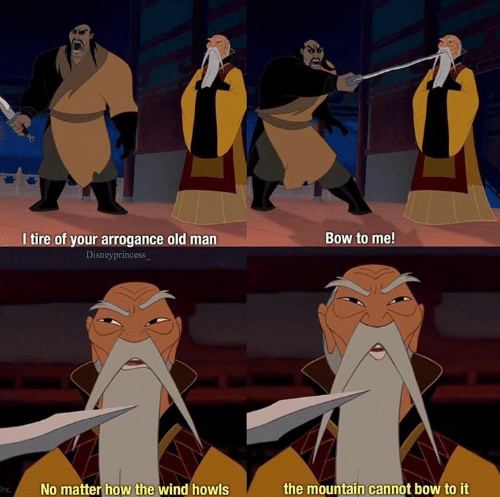 Will you empty your cups and take a sip of nothing…

Nothing doesn’t exist, tho.

Nothing doesn’t exist, tho.

Nothingness both precedes existence and is present at the end of existence. It is forever present, eternal, and can be conceptualised as a precondition for all things, but it does not “exist”. This does not make it intangible however, just incredibly hard to understand, as it is possible to think yourself out of the ego and out of human existence, into at least a fourth dimensional perspective.

I think you are making it more complicated than it is. Not being doesn’t happen.

I think you are making it more complicated than it is.

I wish that was true.

Not being doesn’t happen.

With all due respect, I didn’t ask for a fucking quote. I asked for a presentation of your theory in your own words. Do not degrade yourself or waste my time.

If you are saying nothing does indeed exist… Than you should call it something else.

If you are saying nothing does indeed exist… Than you should call it something else.

can be conceptualised as a precondition for all things, but it does not “exist”

Are we done here?

Than you should call it something else.

There is something and then there is nothing. Two words to describe two things.

For someone who is Knot, I would have thought you would know more about naught. I guess not.

Not when being was an illusion in the first place.

The illusion of not being and being is just that. Knowledge of that illusion is even more deceptive. There is no such thing as nothing.

There is no such thing as nothing.

No space, no sound, no movement. NoThing. The logic is pretty simple. If a room is empty, then what is it filled with? Nothing. Now image that all of existence was empty. All would be NoThing.

Zoom in on that seemingly ‘empty’ space, the more you zoom into a place that looks empty, the more you will see it is in fact full of things, and stuff.

Now, if you cannot understand that, then I am not the one who can lead you to enlightenment, which is the understanding of the Tao, which can be interpreted as nothingness.

So then you are saying that nothing is everything? Everything is nothing? Nothing exists… Omg…