I was looking at The Spider and the Green Butterfly on Amazon.com, and there’s that whiny Elmera bashing EA again. Thinking about selling my copy so was looking at prices.

For such a spiritual man, he sure complains allot. 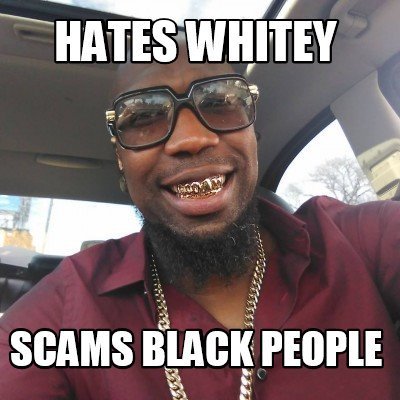 sigh… i have so many choice words

I really don’t know what is wrong with that guy. Prolly just frustrated that youtube isn’t making him money anymore. I don’t understand that metallic shit in his mouth? Is that like third world braces or something?

Doesn’t exactly look badass on a grown man. Dunno. I’m Canadian, we get braces at the orthodontist, not in an alley behind a bar.

my opinion aligns with yours. one thing i know is hes shitting on him because hes powerless. obviously he is because ea still stands

I don’t understand that metallic shit in his mouth? Is that like third world braces or something?

Oh my. Styling alright. Melting down gold from the little old ladies he scams with his fake ass magick.

HAHAHA this is gonna be good

Meh. I don’t really know what to say. The worst is the clearly low intelligence reflected in the bandwagon comments on his vids.

Part of me thinks it’s just people getting a kick out of watching this clown make a fool of himself with every single video. People aren’t THAT stupid.

It’s like cheering on some idiot at a party, so he drinks a large volume of alcohol, just to see him pass out 20 minutes later and effectively take himself out of the party. Cheering him on to get rid of him.

You should try some shots of Absinthe, i brought a bottle of myth absinthe last year very potent drink.

Would love a medium shot of that. Not too much for me.

Well, hasn’t Eric abandoned the Haitian Voodoo current? That may, to some, make it look like he wasn’t truly committed to it—on a long term basis.

To be honest, I could kinda see why. The Loa seem to be a rather . . . vampiric bunch.

it may not be his main path

Well EA is running a business and creating a catalog of magick paths for us to pick and choose from. He may not have abandoned it, so much as focused on different parts of the catalog.

We are the ones that choose our paths in the moments of our lives. EA and Timothy’s company erects billboards along the highway and expands our choices. It is not only a money maker, but a service to mankind. They are helping us rekindle our free will!

BALG can’t stay committed to voodoo, or any other discipline. That’s for us to do!

I communicated with Papa Legba. It was extremely positive, and re-assuring … but in order for me to unlock the true Loa so that they don’t ruin me, I have to make changes in my life that I can’t make right now. If ever the time becomes right for me to approach the Loa, they assuredly will be there for me. Legba listens to your call. Trust that.

One thing’s for sure, bragging about bling and being super materialistic, elitist, racist, and ignorant, like our friend Elmera, is NOT A PATH TO THE LOA. It is the path of self destruction in the most negative way.

The Loa can rip through your life like waves obliterating your weary little ship into a pile of toothpicks, then lighting the whole mess on fire… then pissing on the embers, and waving away the foul smoke.

I understand why hes pissed. Im pissed and im not into Voodoo. Im a Tata in Palo Mayombe. For about 5 years now. Im crowning Chango and recieving Ifa in August in Cuba. the attitude E.A. has about these systems. Is offensive. Its like hes packaging voodoo into a correspondence course. If voodoo is anything like Palo Santeria and Ifa. The energy is passed from person to person. So a correspondence video course isnt real in my eyes.
Just like this forum is called voodun Palo Mayombe and Santeria. I can probably count on my hand including myself of the people that are scratched and initaed into Santeria. By the way hint a real iniated says Ocha not Santeria. I dont agree with how openly racist Elmera is. He says alot of bull shit about Ifa that pisses me off. But its out of ignorance. Ifa is the top period. The strongest oldest witch craft on the planet. Anything else is just childs play.

Do your self a favor just save the money and iniate into something real. Your wasting your time and money otherwise.

Oh it is real to me. Like I wrote, I had an experience with Legba. I don’t need courses or teachers or anything but my mind. I know how to pull spirits towards me or tune myself to currents.

It isn’t my cup of tea at this moment anyways. Legba himself hinted at this. Elmera’s racist BS really does take the cake however.

that is true there really is no reason to be that offensive that is be racist. theyre so worried about us insulting them yet theyre running around insulting other people and theyre tradition