I’ve done a little research and it seems many claim that when the third eye is opened tends to create a disdain for meat and other things? Has anyone else experienced this- there’s a lot of hogwash out there. It’s hard to separate bull from reality but then again everyone is different.

Let’s take out the whole word "Opening"
Your chakras are always open if they were not you would be dead.
What happens is you are pumping a higher amount of energy into that chakra
and are balancing out the energy levels of other chakras.
You are basically stimulating it and cleaning it.
Like washing a window basically

As for the meat thing
Not for me, I eat meat like crazy with a very active third eye.

Yeah just some rabble not one here that I know of but other places like oh meat will appear disgusting and most pursue vegetarianism and blah blah.

I think the disdain for meat thing is because, in the Hindu and yogic sutras from which most chakra information in the West comes, vegetarianism is required as part of the purification process, and so, in my opinion, it has become muddled and is seen as a result of the process, instead of an aid in the process, as originally set out in the teachings (Only the RHP teachings though. There are left hand teachings that use the eating of meat as a taboo to break for power).

That was sort of my sediments. Yes you hit the nail on the head and many of these sources I heard that from come from that background

Id have to say its possibly tied to eastern practices and religious dogma involed with some of those practices. Im an omnivore with a love of spiced meat dishes and it hasnt hinder my practice at all

In Path Notes of An American Ninja Master, the author talks about becoming a vegetarian after going through the Kundalini, but he also states that some of the students he took through the process did not, so I think, as with everything, it is a personal choice.

I realize Kundalini stems from Hinduism but then again that advocate at least to what I’ve read a balance between opening all the chakras from the ground up- ok don’t quote me on the ladder. There seems to be some praise to the kundalini practice even here. I know there some here that’s opening all is the way to go from a balance perspective- may or not be a stretch but I’d say the most sought after goal in LHP practice is the third eye- I think third eye and crown chakra are used interchangeably- not sure if that’s erroneous or not. I watched a video one time with a he who did it escaped me but some Hindu I believe Kundalini guru and he said in no in certain terms that the goal of opening the third eye only is strictly for the use of black magic. I found little offensive to that personally

Hey you!! I have to look back but did you turn me on to the magnet trick awhile back?

Not that i am aware of

lol i no nothing of magnets and chakras.

Electromagnetism and energy maybe but straight magnets to chakras no clue. I would think a lode stone would be better if you were to explore that for any reason anyway.

Whoops I’m sorry- I’ll have to look back and see where that came from. Sorry

The Ajna and the Sahasrara chakra are not the same at all. Kundalini is a biological process that can be triggered through any energy practice, not just the Hindu system of chakras. It is mentioned in literature from cultures throughout the world, though the most well known term “kundalini” is Sanskrit in origin (different cultures have different names for it). In the aforementioned book, the author brought about Kundalini through the practice of qi gong, which does not deal with the chakra at all. He did not try to “open his Ajna,” but he received the same result as if he did.

I highly doubt the most sought after goal in LHP is opening the third eye (Immortality would be my guess). There are many systems of LHP magick that ignore it completely. The only reason chakras are even part of the Western Ceremonial Tradition is because back in the 19th century, Madam Blavatsky (and everyone else it seems) was enamored with the East and made the chakras part of her system of Theosophy, which became widely influential (Tibet, Egypt and India were all the rage back then and seen as more “spiritual.”).

As was stated above, the Ajna is already open. The trick is learning to perceive through it, and that can be accomplished by practicing a system of magick. Personally, i think people make too much out of “opening the third eye.” You can get along quite well without any supplemental practices to do so, and the Kundalini is also not necessary to be a magician. I only mentioned it in reference to the author becoming a vegetarian.

What do you think of tektite stones- I had a custom made necklace that I wear- in fact am wearing it know. I also read somewear about placing them on your third eye but that may be a little more difficult- I guess no more than taping neodymium magenta to the forehead 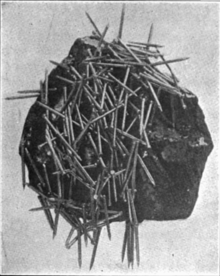 A lodestone is a naturally magnetized piece of the mineral magnetite. They are naturally occurring magnets, which can attract iron. The property of magnetism was first discovered in antiquity through lodestones. Pieces of lodestone, suspended so they could turn, were the first magnetic compasses, and their importance to early navigation is indicated by the name lodestone, which in Middle English means "course stone" or "leading stone", from the now-obsolete meaning of Lodestone is one of onl...


Good for attraction magick of all kinds in my experience. This of course would include the drawing of energy. In theory it could be usednfor repulsion magick as well via the law of polarity, that which can attract can repel but i havent experimented with this as of late.
3 Likes
Novembercomingfire January 28, 2018, 4:32am #16

I totally aggree I was simply referring to the topic of chakras and there “pecking order” if you will. Seems that’s the main focus within the LHP regarding chakras.

The Ajna and the Sahasrara chakra are not the same at all.

The Ajma is the third eye correct and is that to say the Sahasrara is the crown? I was just saying that I think the terms are often used interchangeably

Yes, the Ajna is the third eye, and the Sahasrara is the crown, but I’ve never heard of them used interchangeably. In his works, EA says he prefers the Sanskrit names instead of the Western terms of “third eye” or “crown” because they are misleading, since the chakra don’t exactly correspond to those physical places. Crown is easier to say than Sahasrara though

No. I eat a good amount of clean meat daily and my pineal is working just fine. I personally think that is vegan BS propaganda from the western US new age movements.