Dreams about death, call to Necromancy

Okay so I’ve backspaced this at least 4 times and have started over. Just dont know how to word it most of it. I’m just going to say plain and simple what’s been going on. So if theres any grammatical errors or it just doesnt flow right, I’m sorry. I’d just really like to know if this is a normal thing that goes on or not and how I should approach this.

I’m not sure when exactly it began… I want to say the past month or two. I dont know what to think about it or how to go about dealing with it so I’ve ignored it.
I’ve been having dreams of corpses almost every night. A few of them repeat. The one that started most recently is a dream about a talking skull on a stone pedestal with a little plate of oil sitting next to it. The skull comes to life and begins speaking to me after I rub the oil on its forehead. I remember it had a few herbs and an orange rind. I’m not sure if that’s an actual component of necromancy or not but I believe I’ve heard someone say something about necromancy oil before.

Another dream that repeats is a ballroom full of dancing people, but the people are corpses dressed in Victorian era clothes.

And if I’m not having dreams like these I’m having some other nightmarish images play before my eyes. But surprisingly they dont scare me. I think that disturbs me more than the dreams themselves.

The other week my mother tried waking me up, and I tend to talk in my sleep. She said she asked me a question. I dont remember what it was but she told me my reply was “Oh just something gruesome.”

Next I started to feel that I was/am dead. Its such a stupid thing when I say it outloud or write it out but, I find that subconsciously I’ve been reminding myself that I am dead, but have to pretend I’m not so no one finds out. Wtf? And similar random little thoughts pop into my head like “Oh good, I havent started to smell like a corpse yet.” It’s like my brain just starts thinking that way on it’s own and I catch myself. Or I’ll just be sitting there with death on my mind just replaying over and over the dreams I had from the night before. I dont mean to… but it just happens on it’s own. I’m sure I’m not really like this… but maybe the dreams have been somehow affecting the way my mind functions even when I’m awake.

I began getting visits from Hecate. I’ve never spoken with her before but her sigil flashed in front of my eyes. I didnt recognize it, so I had to Google it.
“Sigil with a trident and crescent moon”. And there it was. It wasnt exact but it was so similar. I decided to read up on her and found out she has a lot to do with Necromancy. So then I started drawing the connection with what I’ve been experiences with the dreams.

So fast forward to just this past week… and I’ve found I’ve become extremely sensitive to cemeteries and graveyards. On my way to school theres this old cemetery on a hill. It used to be out in the open but it’s been years since they’ve built houses around it. All that’s visible now is the old rusting iron gate leading up to that steep hill.
I’d almost forgotten about it until I was driving to class on Monday. As I drove past it… all the hair in my arms and the back of my neck stood up and I have no idea what came over me but this feeling of pure pleasure and energy came rushing throughout my whole body. It felt like my whole body was pulsating.
The feeling slowly faded as I passed by.
Bizarre

And the next day, Tuesday, when I was again driving to class… I felt the presence of my father. He passed away when I was 4. I cant explain it but I could just feel him there. And the next song that came onto shuffle was Candour by Neck Deep, which is a song that sounds like its dedicated to a father who passed away.
The experience was honestly too profound to get into. All I can say was that I missed him and it felt like actually getting a visit from him. It was nice.

And finally on my list of “odd experiences” from these recent days I’ve been having visions of a crescent blood red moon since last Friday, and I come to find out that there is supposed to be a blood moon THIS Friday.

I could really use some guidance here on how to proceed with learning necromancy or whether I should or not. I feel kinda lost.

It may be profitable for you to explore the various deities that have connections to death and the underworld. The little work i have done with spirits of death kicked up alot of unresolved unconscious issues and since then i have had alot of info pop up that indicates work with the underworld has much to do with the unconscious mind which is not pleasant but is of benefit if you can work through it. Necromancy being “death” magick it makes sense to go to deities that embody the force of death to learn.

This page as a very general list of sone of them from what i can tell. 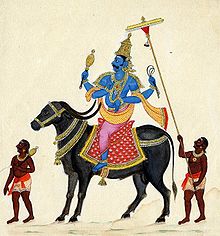 Deities associated with death take many different forms, depending on the specific culture and religion being referenced. Psychopomps, deities of the underworld, and resurrection deities are commonly called death deities in comparative religions texts. The term colloquially refers to deities that either collect or rule over the dead, rather than those deities who determine the time of death. However, all these types are included in this article. Many have incorporated a god of death into their m...

Perform an evocation of Hekate, and ask her what would be best for you in regards to this situation, either way she’ll lead you into the right path for you.
Io Hecate Io Ho! Anana Hecate Ayer!

Necromancy being “death” magick it makes sense to go to deities that embody the force of death to learn.

Perform an evocation of Hekate

I do keep getting calls from Hekate. In the beginning I told her I wasnt ready to work with her, but the way I see it its gonna happen sooner or later so might as well get it over with. I also received a visit from Hel, goddess of death from the Norse Pantheon. She smelled like slightly rotted meat (no surprise there) and plums. I thought the plums part was weird until someone who works with her had told me when a corpse begins the decaying process, it gets a sweet smell like plums. So I found that interesting.
I just thought it was crazy how prominent her presence was. I had never thought of calling her before yet there she was.
So I’m thinking of starting with these two goddesses and branching out from there. I’m gonna have to get over being timid every time I begin working with a new being.

That would make a lot of sense because ever since this whole thing started I’ve found it pretty hard to feel anything, besides this past week. This week has been pretty emotional for other reasons.

I think this is a step in your ascension process & an invitation to to explore the human dead. I had a similar experience many years ago & until I embraced it I was ‘hammered’ by it, like you are now. I still work with the human dead world &, as a LHP practitioner, it was not really a choice I would had made myself but that is the process of LHP workings, it’s not always up to you what path you follow. My advice is to explore this & use your chosen higher deities to assist you. The Ghede Loa are another great source for this sort of path working, they are able to help you navigate your way. I would suggest you would benefit from grounding this & working it into your life. if the dead are wanting your attention just walk the path.I found it to be a very interesting experience. Good luck with your travels.

it was not really a choice I would had made myself but that is the process of LHP workings, it’s not always up to you what path you follow.

That’s exactly what’s been on my mind lately. In fact I’ve been trying to take a break from magick altogether but it seems that Magick does not want to let me take a break at all. I’m so bogged down with work from school. College is making me fat sad and broke lmao. Im hoping things will be better come fall and I’ll have more time for practicing but if I continue to be “hammered” in this way it looks like I’m just gonna have to make time and make another sigil or something for good grades.

Yeah, it sounds like you are being hammered. You should get bossy when dealing with the human dead, I’ve just got back from London where I was living for 5 years, I was ‘hammered’ by the dead there too & even with my experience, I was having my work affected. London is so very haunted!!! Point is, the human dead are like the living, many are pains in the arse, if they want to have any sort of contact with you then tell them to leave you alone until you’re ready. Don’t let them affect you studies. You have something they want, you can ‘hear’ them. take control. And my opinion on magic, you have one foot in the earthly & one foot in he spiritual. It’s complex but if spirit want’s you, it does. I knew a really great practitioner who used to say "we have one foot in the stars & one foot in the shit. do well in your studies

Wow what a statement lol. I love it.
I’ve always wanted to go to London. Haha somehow that made me want to go even more.
So far I havent had any other deads other than my father visit me. Which I didnt mind him, but I promise you I can get pretty bossy with unwanted guests

do well in your studies

Perform an evocation of Hekate, and ask her what would be best for you in regards to this situation, either way she’ll lead you into the right path for you.

That’s what I was thinking

Sigil with a trident and crescent moon

Strict as a nun

Eh? Does she have expectations? Yeah. Is she controlling or overbearing? No.

True, just in my personal experiance accountability is huge, she’ll help as much as she’ll leave you to figure things out on your own. She doesn’t put up with bullshit. Then again it’s likely because I’m hard headed at times. Hecate is great, just zero tolerance for bullshit, the lies one tells oneself she’ll check you on, kinda like Belial in some regards I suppose.

Yea honestly when first contacting a being I try to read the bare minimum about them, just the basics so that I know the experience I have is authentic and not based on preconceived notions.