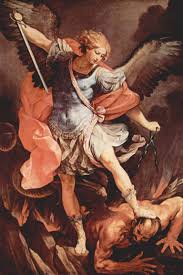 Mine is the opposite course. From light to dark. Necessary, balancing the forces. Some advice, I arrive by ten years of christic gnosis.
Take each separate thing. The old testament has nothing to do with Jesus, the Gospels relate to Gnosis, especially the Apocrypha.

Christ was an initiate, his teachings are similar to those of Gautama Buddha. Saint Paul and others have perverted the teachings.
Christianity is not about what was the Aeon Christ. Anyway, I follow this discussion. Christ said: you are Gods… Sounds familiar?

I think it’s a good move you can work with light side for now and once you can afford to move out you are back to dark side, best of both worlds

This is the best thing that you can do BALANCE is a key ingredient in any and all magickal practive in my opinion, could be wrong, but learning to work with angels is sometimes do beneficial. Chameal had retrieved my friends pet after it ran away, Raphael helped heal my grandmother of precancer in 1 week, raphael has helped heal my back, etc etc. Angel, when they decide to help, perform like pros. They just have different morals and it will feel much different to you when you summon them, but once they begin to work with you and perform, phew. Miracles bro, miracles.

If you ever need that fix, just remember that Lucifer is an angel of light.

Nice shift over, I’m planning to do the same thing once I’m done with my current working. Balance really is the goal, filling yourself with darkness then flooding it with light to show what was hidden. I really wish you good luck and love seeing you and others showing progress on there paths.

It’s strange I have also felt a strange pull towards the “light” but I still need to delve into the darkness to see where it leads. I hope it works out for you man.

Light has its own ways and dark has its own.
It is somehow wrong to say one is better/good.
Balance is always needed.
It is like saying day is good and night is bad.

Can i know these “sources”, if possible?

Tecnically Jesus
Represents much more than Michael, Christ is the man who embodies the divine. Christians, currently, with all due respect, they have no idea who they pray. Christianity is an invention of Paul of Tarsus, a big eggregore, powerful, but that should be seen in perspective. Jesus is the sacrificial death for the rebirth of God. Mithras, Dionysus, Khrisna, even Odin, the Sun. Was an Essene, a magician, a healer. The sons of Ywh couldn’t deal with it and have crippled his message.
Excuse me, I do not intend to be superb. Or dull. About the magic, the most notable thing is the magic of the Psalms. Each psalm has a purpose.

Holy water is loaded ritually, as well as salt and oil of anointing. Are useful tools, but only if the priest is worth something, otherwise Nada nisba niet zero nothing.
My opinions, nothing at face value, but as they say, the wolves dressed in sheep, if the so-called Christianity holds slaves million people there is a reason, and many reasons are more occult than they appear.

I’m confused, isn’t doing exactly what you were doing before, with different daemons, still LHP? LHP is working for yourself as opposed to giving your power away to deity, praying and hoping someone else does it for you… isn’t it?
Why does it matter that one religion gives some daemons the label “angels” as if it’s a compliment and “demons” tp pthers as an insult? They’re still all daemons, much older than those labels, they’re just in different political parties, kind of.

Yeah I don’t get the light vs dark - it seems so… arbitrary,why not red vs blue? and Michael and couple other angels are definitely plenty dark, no ‘lighter’ than any “demon” and in some cases “darker”. A lot darker - tbh Michael scares the crap out of me, he’s easily as harsh and unforgiving as Belial, more so, I haven’t the goolies to call that one yet. Maybe never.

I would suggest that you rely on the telesmatic images of the Golden Dawn, rather than any images created there.

Do you do the full 11 day ritual in his book?
I wish it could be shorting to like maybe 1 day and forget about
What’s with the idea of the 11 days ?

While you can do the ritual for just 1 day and see some results, these angels work their finest miracles when you devote the full 11 days to the ritual. If you have a relatively small, straightforward desire, then you would likely be fine performing the ritual for just 1 or 3 days. For desires or needs that are more important, or results that will have a major impact on your life, I suggest completing the entire 11 days.

This magick, when done to its full extent, tends to extend far into your future. You may find that during the 11 days you discover more about yourself and your desire, and that your desire may change or clarify, perhaps in a small way, perhaps even in a large way.

Think of this ritual like making a major purchase, such as a car, a new computer, or even a house. These decisions will have an impact on you for some time, and you are wise to spend some time researching and contemplating what you want, and how it will affect other aspects of your life. Doing so before the ritual is certainly important, but during the course of the 11 days the angel will assist you with this process, as they are able to see your True Will, and will help you see it as well.

Thank you … you just added to my knowledge
I was going to stop using that book I have all his books … 2019 I will dive back in the 11 day angel magic … I’m going to re read the greater magickal Angel and start doing ritual and making sure this time around I write them down to keep track of what I did . I did not do this in the past …