Did Lucifer tear his own stealth?

I did the evocation of Lucifer last week, I offered semen as an offer on the seal, and an inces of dragon blood, I made my requests and soon the next day I noticed the difference, I asked him to strengthen my sexual energy to attract people to sex and asked other things. Soon the next day some people who rejected me sent messages to me wanting sex, people who had disappeared, and that was one of the things I wanted and wanted, SEX. So far so good. Today Monday, 17-12-2018, I went to the house where I make my evocations (I rented a house only for this purpose) and I was amazed, the seal of Lucifer was torn. But what impressed me was how torn it is, if you look at the photos you will see, the stamp is not crumpled, if it were an animal that had eaten the seal it was for it is dirty and crumpled, if it were a person it would have crumpled the paper, would not have the care they had when tearing the seal, would leave some trace, but the paper was not dirty or crumpled, will be if Lucifer refused to continue helping me? What happened? And only I have access to the house, there are neighbors, and the mistress of the house does not have a copy of the key, she had lost it and even asked me to take the copy, but I got winding and did not take it. Can someone help me with information? 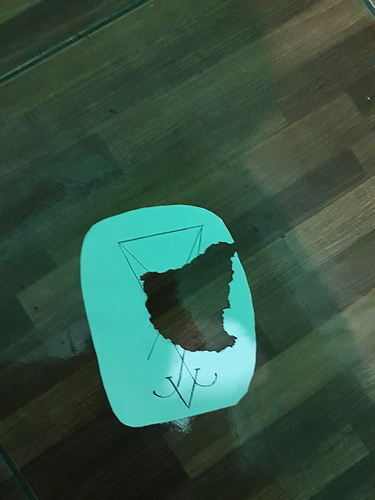 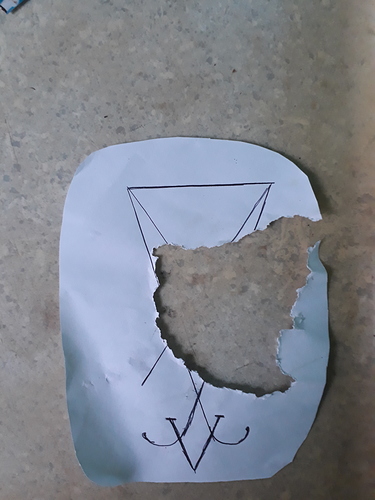 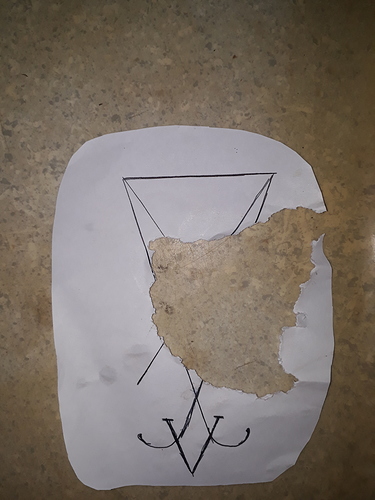 Could be an angry on-looker who found your sigil and didn’t approve. Or it could be a message from one of his many followers. Lucifer doesn’t work alone and has many who are willing to help him in his goals.

I evoked him last night as well and had some weird stuff happen but the sigil def didn’t get a bite mark. Normally I burn my sigils after the ritual so I don’t leave a trace of my work with the entity other than with them and my own energy.

Many wierd things happen when Lucifer is around. There could be many things the cause for what happened. You should ask him!

When I summoned him I did not hear him, but I heard a voice in my mind asking for the semen. There was no way to be someone, the house is completely closed, unless someone made a copy, not even the owner of the house had a copy of the key, because she was wanting a copy of the key, but I did not want to do it. to avoid snooping her, but if it were someone who did not approve, he would have ripped it all up, and even thrown it away, I also keep Belial’s secret in the house. When I arrived at the house the sigil of lucifer continued inside the triangle, the candles, because I left only one to burn, my materials of evocation all near it. And if it was the owner of the house she would have called me to say something.

As I said, there are many wierd things happening when Lucifer is around. His energy is really intense as well! I suggest you to summon him again and focus. He probably wants to talk to you.

That’s the evil working of none other than…mice. Mice are paper eating bastards and I recognize their handiwork. Cute…but evil. Lol

That’s the evil working of none other than…mice. Mice are paper eating bastards and I recognize their handiwork. Cute…but evil. Lol

If so, so much for them to eat, he had candle, styrofoam, other papers, plastics, he had a banquet there, but they ate only the sigil of lucifer. haha

Any more info to add?

Yeah. It was a mouse. Get some DCON or some mouse traps, man.

What would DCON be??

DCON is a type mouse bait that when the mice eat it, it kills them.

Well mostly a charged SIGIL doesn’t get torn. This isn’t Lucifer, I believe the mouse story. This SIGIL charged stands for protection too. Declare the SIGIL void with a little prayer.
‘I continue the workings via en new Sigil and i am closing this SIGIL, declare this SIGIL void because something has torn it apart and it wasn’t me’.

And Lucifer in divination can say ‘yes’ or ‘no’ to a working. He doesn’t tear things… Unless you make him angry. But then it won’t be his own Sigil. For example he can blow out a candle or reshuffle your clothes to the ground

But threated with respect there is nothing wrong here. Enjoy your wokings

i have a question about lucifer. so about a year ago i worked with him and had an open sigil in my old grimoire and then my parents found it and did whatever with it and i never got the chance to close the sigil…could this be impacting me still today?

No, it’s a nice and respectful thing if you can close a Sigil. But if another person destroys stuff it’s not your intend so you don’t have to worry. You can always say a prayer to him about that.

I come from a Catholic background and got many fears implanted. But I shoved that aside and work with him ever since. He still an Angel (and much more

) and he is very patient with people.

I come from a Catholic background and got many fears implanted. But I shoved that aside and work with him ever since. He still an Angel and he is very patient with people.

This ^
I agree with you on that statement. I’m Roman Catholic and viewed Lucifer as a scary entity. After working with him, I’ve seen a rapid growth in my work.

I’ve seen a rapid growth in my work.

Me too. And yes he looks at you as the whole being the whole you. So it can take time to see the changes, but you will see it.