I see Balam with the rams horns, it says he can appear as a bull, man and ram.

So this week for the goetia workshop is Balam. I reached out to him…I called him from the woods behind my home. He came to me… he looked different but I wasn’t afraid He had a human body but horns on his head. They curled on each side …long thick brown horns. He was wearing a black jacket. Yes my lady… he spoke to me… Talk to me. And what should I talk to you about? The storm is coming…I know you feel it… You feel it in your hands. Like electricity. .fire don’t you … Yes. Work with t…

I’m sure of it now Balam connects to that house. 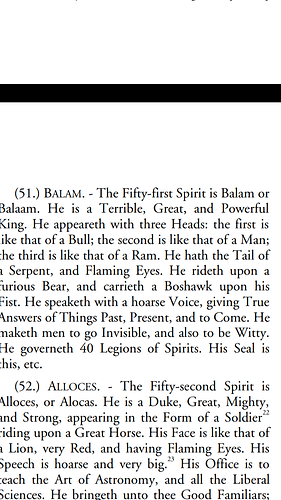 Thanks for the information.
Well agreed because the cameraman Adam Ahlbrandt seem to have a connection with the spirit. He is healthy as far as I can research and he stopped with activities in the house and doesn’t want his name used.
The second person (the lady who saw the boy walk up on the wall) did the same and she only suffered the warnings and no further damage.
The third thing is that there is money involved. People get paid for testimonies. That’s always a bit questionable.

Never seen Demon House, but while we’re talking about horror movies I abosolutely loved the way It acted in the newest movie.

I must watch it now… I only fall asleep watching war movies - saw Platoon twice in the theaters and fell asleep instantly. One of their first places the investigated was the Goldfield hotel in Nevada, that is one freaky place. the whole town was active for me.

Did you see where they went back to the Winchester house.

Yea I saw that. …one of my favorites tho is when they go to Vlad s castle and that forest in transylvania that was insane… I wanna go so bad.

I would love to go too… it’s my dream to go there.

I’ve worked with Vlad before on a Halloween night. He allowed me to use his shield anytime.

I’d love to go to the castle and the forest…

My question is why wasn’t Aaron in the movie?

My sister says he refused to go to the house. But Idk.

Hmmm interesting. Tried doing some research but can’t come up with any info. Thanks

The story I got was something happened around that time and he refused to go and just used that time to do some of his own stuff… but I have no proof that it’s true …just hear say.

Either way… if figured out Balam is connected to it. So I have no doubt about the power that was in that house. And probably stI’ll connected to the parts of the house Zac saved.

Anyway I may see if I can speak with Balam on this see what it was really all about.

hmmm I watched Veronica and Demon House ,Veronica is way better, Demon house it could be fake anyway i mean its part of the business.
I wouldnt like to judge people or to force somebody to read my post but it is worth to mention about ghosts this and that,demons ,goats devil symbols or 666.
Before i use to believe in ghost really but after reading a Quran and watching videos on YT " MercifulServant " i changed my mind and thinking about it. 1. Angels made from Light…servants of Allah , they cant chose anything they are just following commands , 2.Jinn made from fire and they can chose whether to believe in Allah or disbelieve and they have free will to chose. so basically we got Jinn who is bad and a good one,the good one will never hurt you.And in the end to mention the highest threat Shaitan ( Devil ) he is the biggest Jinn and he was the only one who didnt want to pray for our first father and human “Adam” … and its clearly mention ghost doesnt exist but there is as i mention earlier bad Jinn and he will hurt you,and as you saw in Demon House there was something below stairs so that is curse made by someone ,someone who didnt like that family and that isnt fake that is really true

Does anyone know where the crew/witnesses are today that had been effected negatively after entering the house? I have tried to fact check some of the supposed affects that were highlighted in the documentary with no luck. the girl who attempted suicide, the cast member that saw the “demon” in the elevator and what factually happen after his “breakdown” , the hospitalization of the magnetic scientist, ect. I have tried to research all of those claims and have not been able to find anything other than the documentaries claims. Any cited resources or information would be greatly appreciated! thx!

I only researched the cameraman and I had the same. They stand by claims nothing more.
We could see if Zak Bagans wears glasses in Ghost Adventures because he should have the eye thing.
That you enter a cursed house (what could be the case) can bring upon those things, but the strange thing is that Zak Bagans let that house demolish and claimed he saved mud/zand and some other objects from the house (staircase). If it’s really cursed would that be a good idea?

The Specialist end up getting organ failure.
One of his tech guys ended up going crazy and started doing theistic Satanism.
Bagans’ Two Occult friends who talked with the supposed demon in the house ended up dead in a double suicide.

From what my opinion I think the Spirit responsible for most of this is a highly negative.
Bagans’ said it was a tall goat demon.

Not being prejudice here but all the victims were African American and Black culture has this recent obsession with masonry and Judaism.

Makes me think that someone tried to summon the Mendes Goat or Azazel.