Connection with the Infernal Deity

I’ve read that aspects of some demons can open gates to any spiritual realm and help a Magician master the powers of the Abyss. Not so long ago, I conducted a ritual of addressing the Infernal Deity
. Which included an appeal to Nine Demonic Deities, Cliffot and 22 Ruling Archdemons of the Tunnels of Set. After that, I had a dream where I had an ancient scroll in front of my desk (judging by its appearance) and the symbols on it resembled sigils and aspects of some demons that were connected into a certain pattern and it was necessary to mentally assemble it into the correct one. After I did this, I was transported to another space, it was a bright hall. It felt like it was endless or its walls acted as portals. There was the same scroll on the table with other signals and seals, I collected it again and I was transported even deeper into the location, it resembled the Akashic Chronicles, but I’m not sure because there was another person (spirit?) besides me. After that, there was a dream where I looked at what was happening from the side. It was definitely not Earth or Earth at some time period of the past or future. The ground underfoot was scorched and maroon, the sky was red like the moon, there was not a single tree or animal around, and there was nothing around at all except a red tower standing in the distance. I will send a photo of what this location looked like approximately. So, a rider on a horse was moving through this wasteland and there was a chase after him. I really don’t know if this should be regarded as messages from an Infernal Deity or a specific demon 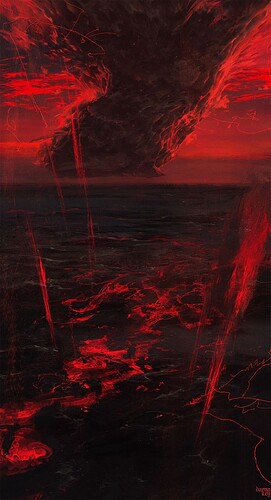 Just popped this into divination, as there’s what dream analysis entails.

A thread to collect advice, tips and tutorials for working with dreams, interpreting them, lucid dreaming and dreamwork. Please feel free to add your favourite posts, and then we will have this available for the common questions everybody asks. Starting with the question "I dreamt X what does it mean?" The Share your Dream Thread - go ahead and pile on, why not? Sex in dreams: Dreams of Influential Figures: A good way to free-associate and let synchronicity bring the meanin…