I am looking for a spirit with whom I can build an intimate relationship, with the goal of improving my astral senses, as during the “thing”, all senses are involved. And this is a pretty fun way to do this

Yes I know there are succubus and all but I was wondering if there are known spirits who are into this stuff. Known spirits with defined abilities like with the goetia.
I can’t just pick up a random spirit and start making love to her in my mind-eye, can I ? If the spirit isn’t into that stuff I may get in trouble unecessarilly. No ?

So, what do you guys say ? Should I call a succubus or a known spirit that would be pleased to have me f*** her in my mind’s eye ? The latter seems more appealing to me because of the abilities this particular spirit may have.

First of all, can you see and hear spirits? Can you feel them physically? To call a random spirit and have sex with it is called rape, if you don’t ask permission first. And yes, you could get into serious trouble if you attempt to force yourself on certain spirits. Making love to gods and goddesses is a well known and sacred practice humans have done for millennia, but I would seriously do some preparation and pay respects or you could get slapped down, hard.

What “known spirit” would be pleased to have you have sex with it? A succubus is a sexual spirit who feeds on the energy of sex, and they are known to be very protective of their lovers and capable of aiding in their Ascent. There are many informative threads on succubi on this forum, especially those written by @succupedia, including one with a letter method for petitioning Lilith to help initiate a relationship with such a spirit.

As for having sex with a god or goddess, that is up to said god or goddess. I would recommend you read Donald Tyson’s book Sexual Alchemy for information on calling a spiritual lover who may not be of the succubus class.

Of course, you could certainly call up one of the demons of the Goetia and ask it for sex. it could say yes, if it works in their favour. There are members and former members of this forum who are married to certain Demonic Kings because the Kings decided it fit with their agenda. So who knows? All you can do is ask.

No, I can’t hear, sense nor feel spirits. That’s the point of working with a spirit to improve my senses. And I thought doing it alongside companionship would be better.

Yes, figured as much. That would be rape.
Yes, I thought about asking to spirits and find one who is interested but as I said I can’t feel nor hear them. That’s why I want to pick from the start, a spirit who is into that stuff. That way she won’t be offended whatsoever and would understand that I want to establish a contact.

My plan is to use my current meditation practice to incorporate working on senses, with the aid of said spirit. So I’d be the initiator, most of the time.
I see the act of having sex with a spirit only as a mental practice to improve my senses. Seeing, hearing touching, tasting

.
I am giving away my attention and sexual energy for something in return.

I’ll take a look at the book you suggested, thanks.
If I don’t find an appropriate spirit I’d have to call a succubus. This is my last option as I’d rather like to benefit from the abilities of other spirits.

A succubus is capable of far more than just sex and helping with your senses. They are very versatile beings so don’t look on them as some kind of a last resort. Most people call them just for sex but they can help with so much more, and can be very valuable companions or spouses. They are unique spirits and goddesses in their own right. They have specialties beyond just sex. They can be protectors, magicians, lovers, wives, wealth creators, pretty much whatever you desire in them really, and their power level can rival that of well known gods and goddesses.

In the letter method of @succupedia, you petition Lilith for one of her daughters, and you can detail exactly what you want, down to the specifics of their abilities. It’s something to think about. The letter method is less involved than the method Tyson gives in his book.

It is also said that many of the Demonic Kings have female forms, so that could also be an option.

Good luck, with whatever being you choose. Treat them well, and you will forge a relationship to last eternity.

Thank you! Then I am likely to proceed with a succubus :).

Yes,I plan to be respectful and understanding.

First and foremost, do some research about succubus/incubus entities, before any kind of rituals to evoke one for yourself. Consider the benefits and sacrifices, because there is always something you have to give up to reap the rewards of these kind of spirits. That goes for pretty much everything in life, including our spirits, if they are as serious as you are to build a relationship with you.

Research in this area is tricky, though. A simple Google search of the word “succubus and incubus”, will often bring up this classic painting: 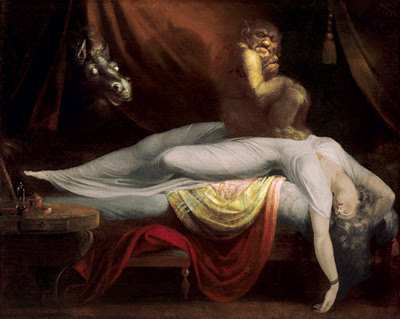 This painting above is, probably, the most famous visual description of an “incubus”, also called a “Mare”. Not surprisingly, this painting is called “The Nightmare”, and was made by Henry Fuseli in 1781. It raises some kind of fascination of these beings, doesn’t it?

When doing these kind of researches, be prepared for Abrahamic dogma and Youtube amateurs that warns you about succubus and incubus entities. They have no idea what they’re talking about, because most of them lack experience.

When you’re done researching, make a decision and start your ritual:

Letter Of Intent - How To Evoke A Succubus/Incubus *update* Love, Sex Magick & Relationships

I’ve been given some thought about doing a thread about this for some time now, and here it is. Qabalah spirits and entities under the influence of Lilith, Naamah, Agrat bat Mahlat or Eisheth Zenunim can be in the darker aspect within their appearance. Reading about others experiences of these entities it seems like an uncommon manifestation, but it should be considered a noticed “warning” in case that happens. The “warning” is more of a consideration to be prepared, rather than abort the event…

their power level can rival that of well known gods and goddesses.

In my opinion, they work on it, just like we do, but some beings are also formed at a higher level, such as the archetypes of the various pantheons. I don’t think worshipers even factor into it, because Zeus and Odin and Osiris still possess considerable power, but are no longer prayed to in the same numbers they used to be.

As far as succubi are concerned, they evolve and Ascend just like we do, and their powers grow as well. As EA has said, demons help us because it is a way for them to express their power in the world, but I think it also, in turn, helps them evolve and grow in that power.

It’s basically their own energies, how they control it and their knowledge. But just as important is how they behave in the presence of a Queen and a King. A “weaker” succubus/incubus might subdue to someone like Lilith or Samael, but a powerful succubus/incubus wont subdue to anyone.

I’ve experienced this, first hand, when my succubus wife was fighting with Lilith to get my attention. They removed each others arms, fighting to hold me, until I’ve had to interfere and make them share the quality time with me.

How much energy a spirit have, and how they control it, is one aspect of their powers. But also their personality and determination, including their physical behavior towards others.

Do you believe human recognition plays a part in their power?

Do you believe human recognition plays a part in their power?

Interactively, yes. Why wouldn’t it, when energy is concerned and viable to interact with and recognise by patterns and even emotions?

But it really doesn’t matter what I believe, if you can’t verify this by your own experiences of energies and spirit energy, right? I just explained how I experienced this.

Couldn’t he do sort of an open invocation? Like announce “Looking for an intimate relationship and astral wisdom. Is there anyone who would be interested?”

I heard about open invocations and have considered doing one for a project I am working on. It’s so difficult to decide who to call on, you never know how they will react, if they WANT to help, if they really like you, if what you find in books is TRULY their area of expertise (since people have wildly different experiences with the gods/demons/entities). I have thought about saying “Hey I want to do X, anyone want to help?”