Many people who hear the word “GOETIA” immediately think in the first book of The Lesser Key of Solomon, but the Goetia is an ancient art whose roots can be traced back to Ancient Greece. Simply put, Goetia is the art of conjuring the spirits of the underworld or chthonic. One collection of books that every Goetic sorcerer must have is Jake Stratton-Kent’s Encyclopaedia Goetica, whose books are: The True Grimoire, a translation and revised edition of the Grimorium Verum, one of the most famous grimoires, Geosophia vol. I and II, which talks about the roots of Goetia and The Testament of Cyprian the Mage vol. I and II that speaks of the transition from the archaic Goetia to the Renaissance Goetia. As a Goetia practitioner, I consider that the concept of life beyond death and worldview that other practitioners should have is to believe in the underworld as the Aztecs, Incas or Greeks or even Sumerians believed. 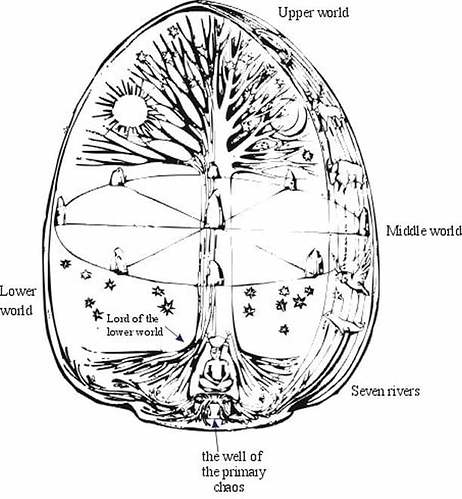 As you can see, these cultures had in common that their worldview was based on a superior or divine world, destined to be the home of the gods, the world in the middle, which would be the Earth, and an underworld that is the place for the dead ruled by a designated entity (such as Hades, Mictlantecuhtli, Nergal, etc).

The curious thing about these cultures is that even the geography of their underworlds is similar. In the Aztec Mictlán we can notice many similarities with the Hades of the Greeks, starting with the boat of Charon and the Apanohuacalhuia river.

It’s also similar in some aspects to the Norse world tree.

I agree, the older sources pre Solomonic are more interesting to me a well. I don’t approve of Solomonic methods personally, and I believe they are a corruption designed to obscure aspects of what’s true. Jake Stratton-Kent is a Solomonic magickian, so that means I don’t see eye to eye with everything he says, but I have enormous respect for him as a mage. I think it’s important to go back to sources that are as unperverted by Canaanite dogma as possible, to take out the blinds and interpret the metaphors correctly, and to an extent Jake Stratton-Kent does seem to do that.

I don’t believe in an “underworld” per se but I think I agree in the existence of various subtle spaces, liminal, purgatorial, mental, emotional, I think there’s room for all of it. I think this image is also metaphor, as is Yggdrasil, and not meant to be taken literally. I see it as the realms/planes underlying manifest/physical reality, more rarified, only accessible through the spiritual/sub consciousness and is energetically based. But the map works for the way spirits incarnate as humans think, and that’s it’s point. I think it doesn’t necessarily work well for spirits outside of humanity.

Nice reply! Yes, there are many “sub-spaces” if we can say it in one form.

Often they do have similarities, like Egypt and the 12 hours being the 12 layers or Aztec with the 12 layers.

then going into spg which aligns with some of these underworlds, and the vast layers but how Norse doesn’t have layers or the sense of an underworld, but only in a sense of understanding what the function of Helheim is they used the term underworld from an outside perspective, but within it they were simply considered part of the “outerworlds” while Asgard, Midgard (could be another) were inner worlds.