Does anyone find it odd how Christ is Jewish but Judaism is an entire separate religion from Christianity? It’d make sense if Christianity was like a form of Judaism, but somehow it became its own thing and then began persecuting its parent religion. Once you think about it, its just weird.

What he preached was sacrilegious so his “cult” broke off on their own.
Judaism loved (and probably still does) to slam Christianity.
I’ve also heard the name Jesus Christ is Greek and not his real name but @Anassa probably knows if that rumor is true or not

If a new sect of a religion is so fundamentally different from it’s origins that it’s considered heretical, there’s no reason to consider it part of that parent religion. I don’t see how that’s complicated.

Christianity was created by the Roman dictator Constantine in 325 A.D. they created a god and his son Christ (Greek for anointed) much of the new Roman religion was taken and modified from the Jewish Torah. It is interesting to note how Christians have turned on there benefactors throughout history, the Spanish Inquisition is just a starting point.

Christ (“Christos” greek: Χριστός) is indeed greek and comes from the word Chrism (Χρίσμα) and its used as a title because he’s been annointed with myrrh 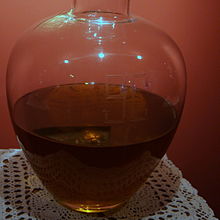 Chrism, also called myrrh, myron, holy anointing oil, and consecrated oil, is a consecrated oil used in the Anglican, Armenian, Assyrian, Catholic and Old Catholic, Eastern and Oriental Orthodox, and Nordic Lutheran Churches in the administration of certain sacraments and ecclesiastical functions. The English chrism derives from Koine Greek via Latin and Old French. In Greek, khrîsma (χρῖσμα) was originally the verbal noun ("(the act of) anointing," "unction") of χρίειν ("anoint"). By extensi...

What is overlooked is that Jesus wasn’t establishing a religion. From what is said he was clearly a powerful magician and was likely trying to spread his knowledge and enlightenment to make things better. However as often happens tales are distorted and corrupted by those that want to use his reputation and words to their own advantage and so his reputation was turned to a religion and further distorted into what it is today.

So we probably will never know what his words really were since the church has such a lockdown on it. Remember popes and shiz will be in command of god’s armies and they get UBER MANSIONS and seats of power. Cause Dey are paragons of virtue.

And the only thing said to be written by the man himself (the Dead Sea Scrolls) is condemned by the church.

From what i understand, it was Saint Paul who deified Jesus and laid the foundations for what eventually became the religion of Christianity with his misinterpretations of Jesus’ teachings, not Jesus himself. Paul was possibly the first recorded religious fanatic (and also a misogynist who hated women) and it was he who sought to force what he believed on to everyone else, which is in direct contrast to what Jesus himself is recorded to have said in the various books of the apocrypha (which are those books that were not chosen to be part of the Bible at the Council of Nicea).

Remember, Jesus was executed because he was anti authoritarian and lectured against the religious orthodoxy of the time. He rejected the authority of the Jewish religious leaders, and became a direct threat to their power by amassing a huge following, and by teaching the ideas of direct personal experience of God, and personal Ascension, both very Left Hand Path ideals. The very basic lesson he wanted everyone to learn was that, as children of God, every human being was capable of the same miracles he was, which is the opposite of church dogma.

Jesus, if he really existed, was Jewish by birth, but the religion founded in his name is not because it was created by others after his death.

It’s because christianity split off from judaism. He is believed to be the messiah foretold by the prophets

Does anyone find it odd how Christ is Jewish but Judaism is an entire separate religion from Christianity? It’d make sense if Christianity was like a form of Judaism,

Christianity is a form of Judaism (not that Christians are going to admit that). The Romans got the idea from the Jews.

Yes, there are noticeable differences, but they’re still connected to each other. Same goes with Islam.

Yeshua hamashiach. Preached that we are gods and can be more powerful than him. Also was clearly a powerful magician because he cursed a tree and caused it to never bear fruit. All that is biblical btw

Does anyone find it odd how Christ is Jewish but Judaism is an entire separate religion from Christianity? It’d make sense if Christianity was like a form of Judaism, but somehow it became its own thing and then began persecuting its parent religion. Once you think about it, its just weird.

Many been down that rabbit hole…
Now what exactly was the main accusation against satan?
He challanged God and seeked to put his throne even above “the most high” - no stoner joke!
Now, isn’t christianity claiming Jesus died, resurrected and now sit’s to the right side of God, next to him?
Therefore, and in total, being equal, to god, and part of the divine trinity “the vater, the sun, the holy spirit”?
Now when you notice that the Religios institution actually channel massive amounts of power from those they hold as sheep, … well, yeah, that’s a simbolism thing. is it?
I’ve prooven to myself, after working with those Energies, that they are very real indeed, by granting random people explenation and access to it for themselves.
They all answered they definately feel something.
Some told me, that it feels like meditation (the focusing on the Energy spring i used to empower my own abilities and shared there to testify if others can use it without study of occult beforehand),
and most got quite shocked when i explained them that the Energy isn’t just real, it’s harvested from all the people which are in the building, to be accessable at exactly that spot.

Now, accessing the Energetic grid seemed to benefit the health of anyone i showed the mechanism.
In turn, that begs the question, how much health is lost, due to not knowing about it and just being it’s cattle.

I have been obsessed with this topic for 2 weeks.

R Wayne Steiger breaks down the Christian myth better than anyone I have seen.
How the Christians stole everything from the Phoenician Baal worshipers.

Lol. What do you think Jesus’ godform was. It must be pretty damn powerful

He’s seen even by occult theogonists as a Magician, somewhere on the level of having integrated his God form and able to manipulate Magick.
In deed, the biggest, most obvious tell was his:
“do you believe in me? -healing accoures - not i healed you, your belief into me did.”
If that doesn’t sound like Spiritual usage of Energies, and even boldy explaining what he did…
I don’t know what is.
Believe is a powerful tool, and let’s just assume it was done based on placebo effects.
Even then, he basically gave away the crutial step of to why it worked:
becouse the recipient needs to belief in it as an reality,
in order for it to manifest as being a reality.

Now in terms of devotion, we know better then anyone else,
that Spirits and “Gods”, gain Energy from their followers.
So there’s a huge emphesis on this aswell.